Robert Boerman, Founder of PTAH Foundation and Webmaster, DCCA Archive, Brummen, Holland: “Last Friday on June 11, we received an e-mail with a report near Wageningen in eastern Holland, a university town so we suspected a hoax. And the previous day on Thursday, June 10, we received a report about genuine crop circles near Wijchen, about 20 kilometers below Arnhem, not far from Wageningen.

As we entered the school field, it was nice done and in the view from the top of the buildings, it was a good view of the circles. But when we entered the circle, but it seemed students had used a beer barrel to roll a pattern in the field.

DID YOU FIND BROKEN STEMS?

Yes, they were broken and bent and a lot of mechanical prints in the soil, so it was obviously manmade. You could see where someone had walked in there and was standing at the center of the standing crop. There was too much and we all decided it was manmade.

WHAT DO YOU MEAN IT WAS DIVIDED IN TWO PARTS?

There was a horizontal and vertical pathway of 2-meter-wide (6.5 feet) paths, but they don’t cross each other exactly in the center. One of the paths was not a real straight line. It was a bit broken.

But the weird thing that our new field worker measured in the ley lines, there were about six leylines crossing almost in the center of the standing crop. But there was also a leyline that came from outside the ring running to the center of the standing crop and then turned around and went back out into the field. So, the leyline turned around. We thought, ‘How is this possible?’ I have never measured any leyline like that in a crop formation before or anywhere. And that one was running to the center of the ring pattern and returned back to the field.

At the other side of the formation on the north side was also a leyline coming into the circle in the ring and then turned around exactly in the standing crop. We also measured in the flattened crop of the ring, we measured three circles and the inner and outer circle was pulling energy downwards and in the center ring, the energy was going upwards. I don’t know what that means, but that’s very strange.

WERE THERE ANY EXTENDED OR BLOWN NODES, OR MELTED INSECTS?

No. But we also used the Bovis scale again in that crop formation. It measured at 5.5 million Bovis. Maybe the energy was too much for us because we all three got tired and had to leave the formation after about an hour. Nothing unusual noticed in light or sound either.” 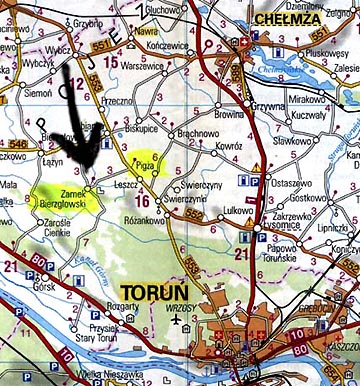 Robert K. Lesniakiewicz, Vice President of the CBUFOIZA (researchers in Poland who investigate unidentified aerial objects and crop formations) reports: “A new formation in grass on a meadow in the Zamek Bierzglowicki village near Torun, not far from Pigza and the Radioastronomical Observatory of the Mikolaj Kopernik University in Torun where one of the first Polish crop circles appeared in 1999.

We went there very skeptical. But we found strange six holes. They were 30 centimeters wide and ten centimeters deep. Then we found another rye formation about 800 meters further. In that area, there was CE2 (aerial light) in the late 1990s which was witnessed by local people.” 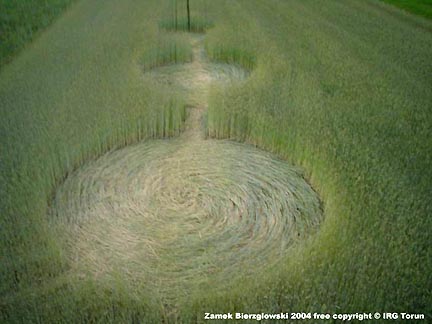