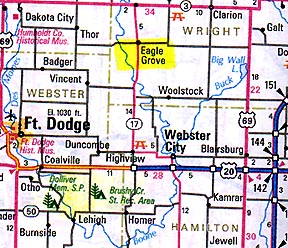 July 6, 2004  Eagle Grove, Iowa – KCCI-TV, The Iowa Channel 8 in Des Moines, reported last night that “a dozen spots” (patterns of downed plants) were found Saturday morning by Brenda and Mike Trevis in their oat field near Eagle Grove in north central Iowa. Some of the plants were described as “pushed over and broken at the roots in various shapes and sizes.”The Trevises called the Humboldt County Sheriff’s Office and so far investigators report there was “no evidence of a person or animal going in or out of the field.” Further, there were no weather events before the weekend that could be linked to a cause of downed crop. Channel 8 provided me four frames from video they broadcast on July 5 . 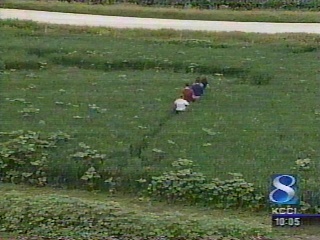 Today, Jeffrey Wilson, Director, Independent Crop Circle Researchers Association (ICCRA), forwarded to me an e-mail from Hillsboro, Ohio farmers, along with a photograph they took of mysteriously downed crop in their garden plot of corn. They wrote:

“We have what most would refer to as a ‘crop circle’ in our garden plot of corn. We noticed it yesterday (July 5, 2004). We have contacted the local sheriff’s department and he said it did not look like vandalism to him, but rather some type of natural or unexplained phenomena. No one has stepped into it yet, as I thought it might be of interest to someone.”The unanswered question over the years: Does the same energy that creates the geometric formations cause randomly downed patterns as well in grass and cereal crops? If the same energy is involved, why are some patterns geometric and others not?