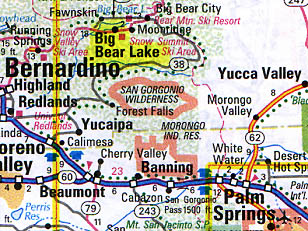 May 24, 2005   Omaha, Nebraska - Back in April 1996, Amy Brockman had been married four years and was living in Southern California. She had grown up in Omaha, Nebraska, where she was born thirty-five years ago in 1970. She graduated from high school with an interest in art and studied for one and a half years in a community college. By April 1996, her marriage was deteriorating toward divorce and her health was bad. For relief, Amy decided to go camping with a friend in the Big Bear Mountains near Big Bear Lake east of San Bernardino. The first morning around 8 a.m., she stepped out of the tent and was overwhelmed by the beauty of the trees, mountains and sunlight. So, she got her 35mm camera, loaded it with a 24-frame roll of 400 ASA Kodak film, and clicked off five shots as she randomly aimed the lens at what appealed to her. During the camp outing, she finished off the roll, had the prints developed and put them in a box. Amy and her husband divorced and she moved back to Omaha to be close to her family parents.
In 2004, she heard a Coast to Coast AM radio program in which I was interviewing people about photographs that had translucent or opaque small orbs in them, even though the photographers had not seen any orbs with their eyes. Amy decided to look through the box of photographs she had been accumulating over the years to see if there were any orbs. To her surprise, she found several orbs in her old photographs - and something else in one of the 1996 photographs from the Big Bear Mountain camping trip that scared her.