So far in 2005, there have been 16 patterns reported in six countries, with some unusual randomly downed crop patterns in the United States and Mexico.

Reporting one genuinely anomalous pattern in oilseed rape and three as human-made. 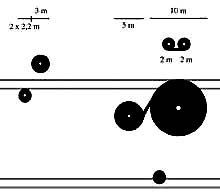 One pattern in grass in Hoeven, Holland again.

4) Island of Cyprus, Mediterranean (No photograph or diagram available to date.)

A pattern 150 meters wide was discovered near the town of Limassol, Cyprus near the UK Military base of Akroliri. It was found some time after a UFO was witnessed by a number of people (“Are they here?” April 29, 2005, Cypress Mail).

A BRITISH resident in Cyprus yesterday reported seeing a UFO as he traveled along the Nicosia-Larnaca highway on Wednesday night.

The man, who did not wish to be identified, said the UFO had been witnessed by several other motorists who had all slowed down their vehicles to watch the spectacle at around 8.45pm.

“At first I thought it was a helicopter. It was in front of me and as soon as saw it I started slowing down and so did the people in front of me and then it speeded up at an incredible speed, hundreds of miles an hour in seconds and literally disappeared in front of our eyes,” the man said.

He said the sighting happened at around 8.45pm. He said al the cars in front of him had slowed down trying to digest what they had seen.

“It was amazing. I don’t know what it was but it was bizarre. It was up in the sky. It looked like the kind of height of a low-flying plane or a helicopter. That’s why I didn’t immediately think it was odd and then as it started to move and speed up I thought, ‘This is weird’. It was bright white sphere of light hovering slowly,”

The man said he checked online yesterday morning and found that UFO sightings were not all that uncommon in Cyprus.

“I had heard about UFOs. I’m not a skeptic but I think you can’t really comment unless you have had an experience and for me when I can’t have a sane explanation for what I see I can’t think of anything else it could be. It was not the kind of thing you could miss. It was incredible,” he added.

Police said yesterday no one had reported any UFO sighting, as did the Larnaca Airport Control Tower.

“The only thing written in the log book for that time last night is ‘We need new chairs for the control tower’,” said one Civil Aviation official.

The official said however that the radar does regularly register what seem to be aircraft but which disappear after three revolutions of the radar.

“We call them Angels,” said the official adding that they generally put these ‘phantoms’ down to weather interference. “Of course we are angels here ourselves,” he said.

Ioannis Fakas from the Fakas Institute of Astronomy said nothing had been reported to him either. In fact he said he had been called to Limassol to look at a reported crop circle in a field outside the town.

He decided however that the crop circle, which was around 150 metres wide, was probably man-made. Crop circles, which are said to be mathematically precise designs imprinted into a field of crops without actually damaging or killing the plants, are often associated with aliens.
Fakas said he believes people see UFO’s but does not believe they are of alien origin. As an astronomer he said he does think it’s logical that life must exist elsewhere in the universe, but does not believe they visit earth.

He said that research has shown that 93 per cent of all UFO sightings are explainable.
“I don’t believe men from other worlds would come all the way here and then try to hide from us,” he said.

Whatever they are, UFOs have been spotted over Cyprus on many occasions in the past. In March 2002 a Swiss playwright who had just retired to Paphos, said he spotted a silver, saucer-shaped object ’emerging from the clouds’ as he walked along the beach. The UFO apparently hovered before ‘floating down’ and disappearing behind some rocks.”

Linda Leblanc said she and John Knowles, her partner at the Paphos-based Pyschognosia, which looks into paranormal incidents, said they had seen UFOs on several occasions over Coral Bay.

She said Wednesday’s sighting by the British resident was interesting as there appear to have been other witnesses. “We keep a roving eye on things and of course we are always looking ourselves,” she said.

“There is plenty of good evidence to support UFOs. There is no doubt in our minds that something is going on so we’re not surprised to hear about this. We don’t really know what they are but there have been some links to the military. You see a lot of sighting around bases. It could be testing new technology.”

Knowles said it was useful for people to report such incidents. “What is necessary is to have multiple witnesses and they should record the exact details and have everyone sign it. I’d be happy to pass it on to Mutual UFO Network,” he said.

“There is too much of a tendency on the part of the establishment to sneer and disdainfully dismiss everything. It always helps to have more and more evidence.”

Knowles confirmed that sightings are fairly common in Cyprus. “I’ve had a couple of sightings myself,” he said.

A randomly downed pattern in oats; and a second formation yet to be updated.

There have been at least three reports of randomly downed crops in Oregon, North Carolina and Arizona. The most recent this week in Arizona outside Phoenix is estimated to be about 600 feet long made up of three long parallel strips laid down in wheat.

Three long, parallel strips were reported laid down in a wheat field near Lower Buckeye Road and 75th Avenue in Phoenix, Arizona. Jeffrey Wilson, Director of the Independent Crop Circle Researchers’ Association (ICCRA) in Ohio, reports that ICCRA member, Ruben Uriarte, learned about the Tolleson crop anomaly from Salvador Estrada and Victor Camacho after they called a Spanish-language radio station with news about the crop anomaly. Jeff Wilson asked Rod Bearcloud Berry to investigate and e-mailed, “Bearcloud reports that there are three linear flattened pathways approximately 525 to 600 feet in length that are parallel to the power lines and the road. Interspersed between the three pathways are a series of irregular flattened shapes, none of which cross any tramlines.”

Jeff further searched Google Maps and found that “their satellite photography shows an unusual ground feature in the same region: three linear, nearly parallel strips with no vegetation. We don’t know when these satellite photos were taken, and the orientation of the 3 lines is different than what Bearcloud has discovered flattened in Tolleson on May 19, 2005. But it appears that both events have occurred in the same field. We don’t know what this feature is yet that appears on the Google satellite photos.” 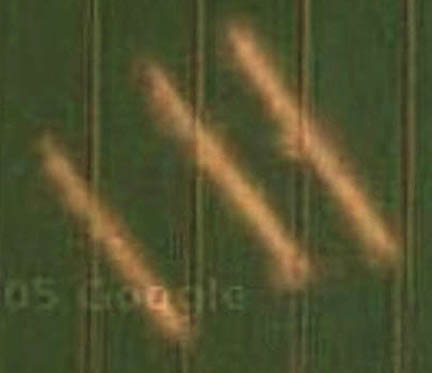 Downed barley in three fields that cover 25 acres about 1.5 miles down Robinson Road from U. S. 70 in Hickory, North Carolina, caused motorists to call the Hickory Daily Record newsroom on Sunday, May 15, 2005. Compare to the photograph below of the Linfield, Pennsylvania, randomly downed crop of May 24, 1992.

“I hate to think the aliens were right here and I missed them,” a neighborhood resident said.
The woman – who wouldn’t give her name, worrying that friends would think she’s nuts – said she heard nothing out of the ordinary prior to noticing the crushed areas. She didn’t see any strange lights, either. And her pet has been behaving normally.

The damage extends about three blocks by one block. In that area, only some of the grass is compressed, while large swaths and small tufts still stand tall. No noticeable paths lead from one squashed spot to another. The grass is lying down, but not all in one direction. That makes this damage different from classic crop circles reported elsewhere.

Observed from the ground, it seems to be flattened in random shapes, rather than in a perfect circle or geometric design. But from the air, it may appear to spell a word or form a pattern.
‘Welcome to Mac,’ (McMinnville) perhaps?”

Puzzle of Odd Randomly Downed Crops
That Show Biophysical and Biochemical Changes
Randomly downed events are usually dismissed by local public, media and some crop formation researchers as wind damage. But back in the mid-1990s, unusual randomly downed crops started being reported in England and the United States, including Pennsylvania and Maryland.

In June 1995, I flew over an odd, non-geometrical downed wheat crop in Cherry Hill, Maryland, which had 90-degree rectangles and other odd shapes on the ground which also looked different from the air, compared to natural wind damage I could see in surrounding fields.

A group of us sampled plants from the Cherry Hill wheat and later there was a similar investigation at Blue Ball, Maryland. From those randomly downed samples, Biophysicist W. C. Levengood found the same extraordinary growth node lengthening, reorientation and metabolic changes in plant cells that he has found repeatedly over the years in plants sampled from geometric patterns in the United States, England, Holland, Israel and other countries.

In summary for this spring of 2005, counting the four randomly downed reports in the United States and Mexico, eleven geometric patterns in Germany, England, Holland and Cyprus ­ plus the most recent pattern in Mexico not yet clarified – there have been 16 patterns reported in six countries.