May 22, 2004 – As of this date, crop formations in 2004 have ranged from yellow flowering oil seed rape in England, Germany and Holland to wheat in Poland, tall pasture grass in Australia and randomly downed wheat in Mexico. German researcher, Andreas Mueller, thinks at least three of the four German formations are man-made. He is intrigued by the television video frames below of a Mexican field which do not show neat geometry. Instead, there are patches of downed plants along straight lines, vaguely reminiscent of the “binary code” in the Chilbolton Observatory, Hampshire, England, formation first reported on August 20, 2001. Also of interest is the Vesica Pisces comparison between the May 3, 2004, formation near Pegsdon, Hertsfordshire, England, and the Peebles, Ohio, pattern discovered near the ancient Serpent Mound on August 24, 2003. Under More Information below, is a statistical study by Jeffrey Wilson of 361 crop formation reports in the United States from 1880 to 2003 that reached his database.

For the truly mysterious patterns each year, there is the continuing challenge to understand how the global magnetic grid underlies all of them and might predetermine specific latitude and longitude positions of each pattern. Robbert van den Broeke in Hoeven, Holland, who has watched plants go down in the presence of mysterious lights, thinks the “light balls” make crop formations around the world to affect the planet’s magnetic lines of force. “The whole earth has energy lines in it.” he said. “And in the energy lines, you have places you can call it ‘chakras of the Earth,’ and they are doing something. They give an engine with energy and it goes on a network throughout the whole world. Sometimes when you are standing in places, you can feel it. If you are very sensitive, you can feel it.” Robbert perceives a large universal energy force is working through the magnetic fields of our planet to change the future from environmental destruction to preservation.

1) Reported May 4, 2004, at Baden-Wurttemberg near Sinsheim in yellow flowering oil seed rape.

4) Reported April 28, 2004 at Rheinland-Pfalz, Kreis Soedwestpfalz in yellow flowering oil seed rape. Andreas Müller, who investigated at the scene, said the formation is man-made because of “an irregular geometry accompanied by an enormous damage to the plants.”

1) Reported May 15, 2004, at Telegraph Hill near Cheesefort, Hampshire, in flowering oil seed rape. Single ring four feet wide and 50 feet diameter. Lucy Pringle, who flew over the formation to photograph, thought it might be manmade. 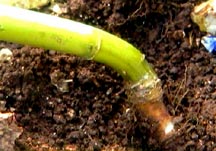 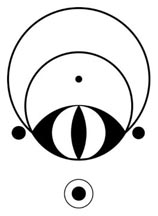 1) Discovered May 7, 2004, in a field of grass about one mile from the Hoeven home of Robbert van den Broeke on his 24th birthday. See: 05/11/04 Earthfiles. Four circles were close together in grass about one mile from the Robbert van den Broeke home. The circles measured from six meters down to one meter in diameter, according to Robert Boerman, founder of PTAH Foundation and webmaster of the DCCA Archive.

Robert Boerman: “We visited the new circles in Hoeven on Friday, May 14. We saw that the grass had been mowed so we couldn’t see the circles anymore. Then we went over the circles with some dowsing rods and we found the circles after lifting the grass up that was covering them. At first we thought it was three circles, but we found a fourth also. You can feel the energy from the circles in your legs, as if the energy is pulling your legs to the earth. It was a very high energy.

“The guy who was with me was using a Bovis biometer and said the energy at the Hoeven circles was more than 10,000 Bovis, which is very high for a crop formation.” (Editor’s note: The intensity of the rays or vibrations, of a place, plant or object can be measured using a dowsing pendulum. The Bovis scale utilizes the knowledge of electromagnetic wavelengths and specifically the wavelength of red light which is in the region of 6,500 Ångström. An average value for a healthy abode and for a healthy person is 6,500 Bovis units. Values below 6,500 Bovis units indicate a qualitative energetic deficiency. Values above 6,500 Bovis units indicate a higher quality.)

1) Reported May 26, 2004, in Cadereyta, Nuevo Leon, Mexico, but known by owner Reginaldo Garza Leal, on March 16, 2004. Large field of wheat in which plants were put down in patches along straight lines, according to the analysis of German crop formation researcher, Andreas Mueller. First, the report from investigator Santiago Yturria from Monterrey, Mexico, who wrote on May 20, 2004: “There were two more large formations reported in nearby properties adding more excitement to the story. However the formations were not the classic crop circle designs well known in England and other countries. These were formations following the same characteristics (of downed crop), but with undefined shapes.

“The strange thing was that the phenomena just affected the El Salitrillo property and not the surrounding properties. The same happened with the other two properties. There is still no explanation to this phenomena.” 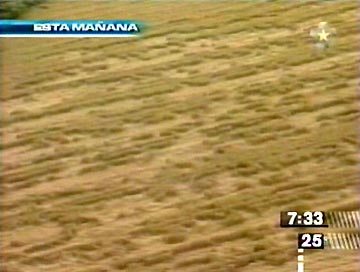 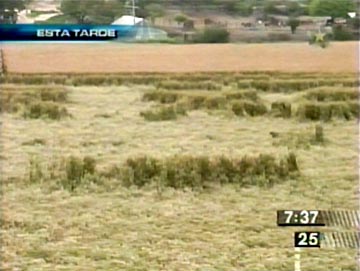 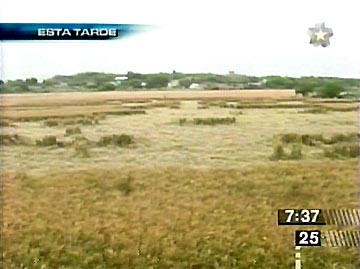 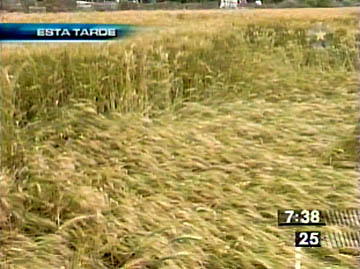 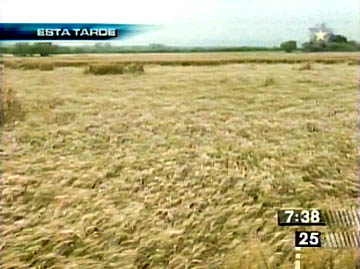 After studying the videotape frames from Cadereyta, Nuevo Leon, Mexico, Andreas Mueller e-mailed on May 20, 2004:

Andreas Mueller: “In fact this is not what we normally call a crop circle.
But the discussion (is) in which way (and if) crop circles are connected to what
people call ‘wind-damage’ or ‘lodging.’

For now the interesting thing for me is the fact that the lodging happened
along straight lines and this against the tramlines – see attached photo.
There seems to be some sort of interacting of the two directional
principles.

There are several cases in which ‘wind-damage’ started to form geometrical
characteristics, like straight lines for no obvious reason. Maybe the
natural source that beats normally down the crop into chaotic ‘wind-damage’
is the same one that is/or gets used as the mechanical part in a crop circle
forming. But then we have to ask what brings in the geometrical part to
create geometry?

There is also another aspect that both ‘wind damage’ and crop circles share:
very few people have observed the one or the other in the very process of
forming.

Finally I myself do not think that one can call the Mexican case a ‘crop
circle’ – but it brings in a new case to discuss the above described
question.”

1) Reported on March 28, 2004, in pasture grass near Conondale, west of Maleny in Queensland, Australia. Four circles of varying diameters in a line on a north/south axis. See: 04/14/04 Earthfiles. 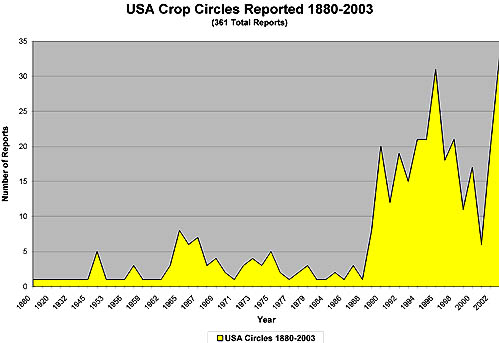