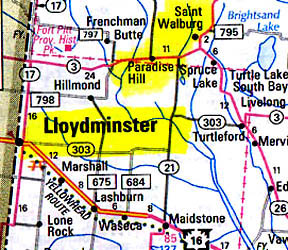 June 17, 2005   Paradise Hill, Saskatchewan, Canada – Rancher Ray Riguidel, 68, was born and raised in Saint Walburg, Saskatchewan, Canada, northwest of Saskatoon. The past thirty-five years he has run cattle on pastures in both Saint Walburg and nearby Paradise Hill. Nothing strange had ever happened to his animals until he discovered one of his 10-year-old cows dead and mutilated on Friday evening, June 10, 2005. She had been alive and well, nursing her 2-month-old calf, only three days before.

Ray had heard about cattle mutilations from another rancher further south. Five years ago, George Larre also found one of his cows dead with strange, bloodless excisions. This week Mr. Larre told the Meridian Booster newspaper in Lloydminster: “If you haven’t seen it, I wouldn’t expect anyone to believe it. But if you really see one for yourself, and you understand what coyotes will do, you know it’s not predators.” And now, Ray Riguidel has seen one of his own fall victim to the phenomenon.

Ray Riguidel, Rancher, Paradise Hill and Saint Walburg, Saskatchewan, Canada: “Friday about 6 o’clock, I went up to my pasture about four miles from here (home) to check my cows in the evening. The first thing I seen when I went to the gate was an animal laying out in the field. So, I drove there and checked her out. A friend was with me. We both were quite shocked at what we seen.

COULD YOU DESCRIBE IT?

Just a big cow laying there. The cow I knew well, one of the main cows. Her udder was completely cut out very neatly. It’s hard to describe. But it was about two inches bigger all the way around than the udder would have been. She was a big cow, probably 1600 to 1700 pound cow. So, this circle was about ­ if you took a pail bigger than a 5-gallon pail and drew a nice perfect circle around the can and then used a real sharp knife and made that perfect circle. And don’t go too deep, just skin deep, not into the fat and muscle ­ just the skin and took that out. I think it would be impossible for a normal human to do that, unless you were a surgeon probably. That caught my eye because it was unreal.

IF I UNDERSTAND WHAT YOU ARE SAYING THAT THE ROUND EXCISION WAS BOTH PERFECTLY CIRCULAR, ONLY WENT HIDE-DEEP AND DID NOT EVEN CUT INTO THE MUSCLE?

Never cut in, no. It was just hide removed. You couldn’t do a more perfect circle and the depth was perfect. The back end was cut out and looked fairly hollow. I didn’t like the looks of it.

At the front end, one ear was shaved right at the head.

AT THE BASE OF THE EAR, WAS THERE A CIRCLE WHERE THE EAR HAD BEEN REMOVED FLUSH WITH THE SKULL?

Just straight across, I would say, pretty well at the skull but pretty well straight. And the top eye was gone and there was a hole going four inches into the head.

YOU WERE LOOKING INTO THE HEAD THROUGH THE EYE?

Through the eye. The ear was just shaved off, or cut off clean. The eye was not just took out. The hole went down inside the head.

WHICH SIDE OF THE HEAD WERE THE EYE AND THE EAR REMOVED FROM?

From the right side. She was laying on her left side.

DID YOU TURN HER OVER?

No, I didn’t touch her. I walked away. I had enough just looking at her. I’ve seen lots of animals in my time dead, but I haven’t seen one like this before. I’ve heard about them. So, it was enough for me. I come home and got a tarp and took it up and covered her. But the only thing around her then was a few flies.

WHAT ABOUT THE MOUTH? DID YOU OPEN IT UP TO SEE IF THE TONGUE WAS THERE?

No Blood, No Tracks

COULD YOU DESCRIBE THE NATURE OF THE EXCISIONS IN TERMS OF WHETHER THERE WAS ANY BLOOD PRESENT OR NOT?

None at all on the udder. Very hardly noticeable on the back end. But on the eye, there was below the eye, it looked like dried blood on her hair. That was the only blood I could find. There was none around.

DID YOU EXAMINE THE GROUND AROUND THE ANIMAL LOOKING FOR TRACKS?

There was completely no sign of tracks at the time.

THE PASTURE CONDITION WAS SUCH THAT IF THERE HAD BEEN, YOU WOULD HAVE FOUND THEM?

There was lots of grass, but as far as I could see there was no tracks.

DID YOU ALSO ASK ANY OF YOUR NEIGHBORS IF THEY SAW ANY UNUSUAL LIGHTS IN THE SKY OR HEARD ANY UNUSUAL SOUNDS?

I’ve been checking it out, but nobody seems to know anything.

WHEN WAS THE VERY LAST TIME YOU HAD SEEN THE COW ALIVE AND WELL?

SO IT COULD HAVE HAPPENED BETWEEN JUNE 10 AND JUNE 8?

Right. The last I’d seen her, she was OK. But when I went out on Friday, that’s when I found her. But she was fairly freshly done because there was no smell and all that was there were a few flies flying around. The following day when we went back the next day, she was starting to smell.

Another thing – I had probably 50 cows in this pasture and it’s not a big pasture. Lots of grass, but not a big pasture. And these cows, after I seen the one laying there, I checked my other cows. One of them spotted her and the whole herd went over and were worked up for a bit.

WHAT DID THEY DO?

They circled right around her and some were mooing and some were pawing the ground. Even the calves come and they all made a big loop around her body. I just stayed back and let them, but I never seen cows do that before.

SO, THE YOUNG AND THE OLD ­ THE REST OF THE HERD ­ GATHERED AROUND HER DEAD AND MUTILATED BODY AND STOMPED AROUND ON THE GRASS AND THE DIRT?

ALMOST AS IF THEY WERE TRYING TO STAMP OUT SOME ODOR OR SOMETHING?

Almost, but I don’t know. I’ve seen cows upset and these were upset. But I don’t know what they sensed in her. A dead cow is no big deal in a pasture. But the herd was quite worked up.

IN SO MANY CASES I’VE INVESTIGATED, RANCHERS DESCRIBE HERDS GATHERING AROUND A DEAD AND MUTILATED ANIMAL AND STOMPING THE GROUND TO THE POINT THAT SOMETIMES THE DIRT IS EVEN CHOPPED UP. IN OTHER CASES, THE HERD WILL GO AS FAR AS IT CAN AWAY FROM THE MUTILATED ANIMAL .

HAVE ANY NATURAL PREDATORS EATEN ON THIS BODY SINCE YOU FOUND HER ON FRIDAY?

Not yet. There was a coyote out there, but he was out kind of far. And there was one raven sitting on her. But usually there are ravens and magpies all over, but so far nothing has really bothered her body.

UNDER NORMAL DEATH CIRCUMSTANCES, WOULD NATURAL PREDATORS HAVE EATEN THE CARCASS UP BY NOW?

It would be hard to find any of her. If an animal dies normally, within two to three days it’s hard to find a brand on them because it’s normal for the predators to come and clean up. We have lots of predators and they don’t bother until an animal goes down. But this one, they don’t want her for some reason. There’s something not right there, too.

HOW FAR WAS HER BODY FROM WHERE YOU ALL LIVE?

I’d say four miles the way a crow flies if you went straight.

SO YOU WOULD NOT NORMALLY HAVE KNOWN IF SOMETHING UNUSUAL WERE HAPPENING IN THE PASTURE?

No, I wouldn’t unless I was up there and seen it.

DOES ANYONE ELSE LIVE CLOSER?

One family lives about 3 miles away.

SO NOBODY WOULD BE WITHIN A QUARTER OF A MILE?

No, it’s kind of isolated.

HAVE YOU TALKED WITH ANYONE IN LAW ENFORCEMENT?

IS THERE ANY REASON WHY YOU DID NOT CONTACT THEM?

What I heard on some of the cases, they just said it was predators or did not know. I called a man named Fern Belzil in St. Paul, Alberta, who checks these things out and he came Sunday.

WHEN YOU TALKED WITH THE OTHER RANCHER, MR. LARRE, ABOUT THE MUTILATED COW HE FOUND IN 2000, WHAT DID HE TELL YOU?

He come up and looked at mine and as far as he was concerned, it was quite similar.”

Editor’s Note:
The Meridian Booster newspaper on June 15, 2005, reported: “George Larre, 59, another rancher about 32 kilometers south of Ray Riguidel’s farm, had a similar mutilation take place about five years ago. While the scene itself was gruesome enough, he said the behavior of other animals in the pasture was disturbing. “The first thing I noticed was her calf was not there, none of the cattle were there. They had all moved to the far end of the pasture and did not come back for ten days to two weeks. I went there and there was no sign of absolutely anything. But there was a fair bit of pasture that year, so if anyone went there with a vehicle, there should have been tracks or something, and there wasn’t.”

About the ET hypothesis: “If you haven’t seen it, I wouldn’t expect anyone to believe it. But if you really see one for yourself, and you understand what coyotes will do, you know it’s not predators. Some people say it’s from up above, and I don’t know. I’m not going to say it is or it isn’t. But when you see absolutely no clues and no reason, you really have to wonder.”

“I’VE TALKED WITH SOME PEOPLE WHO HAVE WORKED IN THE U.S. GOVERNMENT AND MILITARY WHO SAY WE ARE DEALING WITH CREATURES NOT FROM THIS PLANET IN THESE ANIMAL MUTILATIONS. WHAT IS YOUR REACTION TO THAT?

I don’t know. I’m curious. I do believe there is something we don’t know, but it looks like whatever it is, they want us to know because they could have hid this animal in the bush and I would never have known about it. It’s placed out where they wanted the cow to be seen. She was the first thing I seen when I went out to that pasture. In that pasture alone, there are a thousand places where I would NOT have seen it if I wasn’t looking for it. So to me, it looks like whatever did this job wants it known that it’s done.

WHAT DO YOU SUPPOSE THE IMPLICATION OF THAT IS?

I don’t know what that would be ­ somehow trying to prove something? What that is, I don’t know. But I do know whoever, or whatever, did it has no merciful heart because there is a 2-month-old calf out there looking for its mother. That bugs me! If they had any heart, they wouldn’t do that to a cow that has a calf. At least, they could have waited until the calf is weaned, if it would help any. But the whole thing to me is sadistic, or something, not normal. I don’t know if humans could do what I seen in this cow.”

See other Earthfiles reports about worldwide unusual animal deaths in Headlines Index and the Earthfiles Archives: