March 8, 2006   Western New Jersey – I have known New Jersey survey engineer, Vincent Creevy, for more than a decade. He is very critical-minded and an excellent observer of details in his environment. So, on March 4, 2006, when I received the following e-mail with an attached photograph, I asked Vince if I could share his correspondence at Earthfiles, and he said yes. There have been so many mysterious lights photographed around the world – sometimes seen by the photographer, but most often not seen until after the images are taken.

I thought you might be interested in this photo. I took on 2/17/06 at around 10:00AM with a Cannon A-95 digital camera. It was cloudy, so there was no sun glare. I took this photo routinely in order to record the forest type as part of some environmental work I was performing on a site in western New Jersey. I don’t know what to make of it and still suspect that it may be some artifact of the camera, but I have never had this happen before.

Best Wishes for the Easter Season,

From Michele Bryant on the island of Maui in Hawaii came this e-mail and image today:

“Linda, this looks so much like the photo on your site. I took it with my Nikon Coolpix 885 in December of 2003. There was no flash used. It was a cloudy, wet, day but not raining when I took this photo on the island of Maui, on the road to Hana. I’ve never had something like this show up in any photos before of since, even when I tried to make it happen by photographing dust, raindrops, even snowflakes. It was a very special spot. the photo was supposed to be of those gorgeous trees in the background.”

From Francis Erdman of Schaumburg, Illinois. The location of her mysterious orb image was in a forest south of Devil’s Lake, Wisconsin, on November 3, 2005, at 1 p.m.

“On November 3, 2005, I was visiting a forested nature area south of Devil’s Lake, Wisconsin, with my wife, my sister and her husband. It was a sunny day about 1 PM. We were hiking up a narrow, blind glen and I was taking pictures with my Canon A95 digital camera as we went along. The glen is somewhat shadowy, so my camera flash was operating on almost every shot. I was concentrating on rock formations and general forest scenes.

Several weeks after our return, I was again reviewing these pictures when I noticed what appears to be a translucent bluish sphere in front of a tree in the lower left quadrant of one picture. I did not notice it when I took the picture as I was concentrating on the overall composition of the scene. I have contacted Canon and they say that nothing in the camera’s operation could create this anomaly. None of the prior or following pictures showed any anomaly. I checked the lens before I started shooting and during shooting to be sure it was clean and free of any foreign material.

What is most interesting to me is that when I cropped and enlarged that portion of the picture with the anomaly, it appears to have structure: two inner concentric rings of smaller objects and something in the center. I have shown this picture and the enlargement to many people, some of whom are knowledgeable in photography, and no one has an explanation – nor do I. I have also sent the photos to the Dept. of Natural Resources person responsible for this area and asked if anyone else has reported such an anomaly in the glen. After seeing the photos, he states that no one has ever reported such an anomaly in the glen before. I have been taking pictures since the 1950s, been in this forest glen several times before, and have never captured anything like this on film or digitally before.” 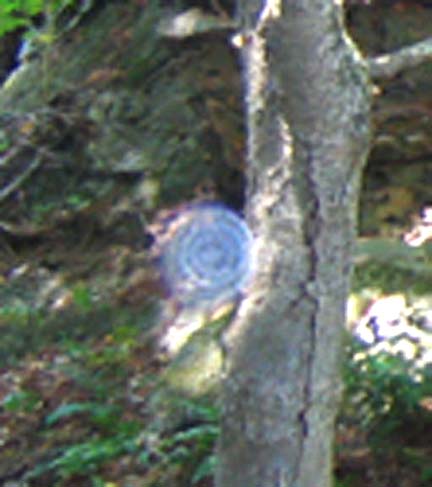 For more information about mysterious balls of light, please see my book, Mysterious Lights and Crop Circles, in the Earthfiles Shop.