“The UFO looked triangular-shaped to me and had like oval-shaped
lights on it that were real pale blue with beams shining out.”

January 26, 2007   Tappen, North Dakota –  About 60 miles straight east of Bismarck, North Dakota, is the small farming community of Tappen in Kidder County. From a USGS TerraServer satellite, Tappen’s farmland looks like an odd game board because crops are planted in circles to make center pivot sprinkler irrigation easier.

There have been many unusual animal deaths and disappearances in the region. Not far to the northeast is the Chase Lake National Wildlife Refuge where 29,000 American White Pelicans disappeared from the refuge in May 2004. The next spring in 2005, about 18,000 adult pelicans returned, but eight thousand White Pelican baby chicks mysteriously died – perhaps from West Nile virus. Further south of Chase Lake is the Roestler Lake Waterfowl Protection Area. For six straight years between 1999 to 2004, thousands of ring-billed gulls and double-crested cormorants died – challenging the U. S. Fish and Wildlife Service to understand why the die-offs should be so persistent year after year.

Farmers in Tappen, with a current population of about 200 people, have also been challenged by mysterious deaths and disappearances of livestock. One of those families is Myra and Torrey Briese, both in their late forties, who have lived in Tappen all their life. Their five children are Tessa 23, Trista 20, Evan 16, Tia 11 and Marshel 3.

The Briese farm has 1200 acres and 100 head of cattle, the family’s main source of income. For fun, 16-year-old Evan Briese and his 11-year-old sister, Tia, have raised six hogs in a corral not far from the house.

A half mile beyond the pig corral, Torrey Briese found one of his cattle dead in October 2005, just over a small embankment at the edge of a dug out water pond.

Torrey admits he did not examine the dead cow closely at the time, but realized a few months later on April 6, 2006, that coyotes and other predators had not touched the carcass.

Torrey Briese, Cattle Rancher, Tappen, North Dakota:  “The predators never ate on her. That is something I just don’t understand. In fact, I can tell you that up the gully from where that dead cow was (in October 2005), I had lost a big sucking calf – about a 900-pounder. I had some feed out there and one over-ate and bloated. And the coyotes devoured that thing in about five days. It was gone – just a little bit of hide and a couple of bones. That’s it. So, that’s the contrast. These two critters were that close together. That cow was never bothered. But this other calf was eaten within the matter of a few days. ”

The reason Torrey Briese paid attention to the long-dead cow on April 6, 2006, was that something very strange entered the Briese farm near the water pond on the other side of a small embankment about thirty feet from the dead cow. Afterward, as Torrey and his family explored the land around the water pond, Torrey found a large, disc-shaped pattern etched on the dead cow’s hide next to two triangular punctures. The disc was overlaid by six lines. The odd pattern had been created by cutting away the sun-bleached surface hair to expose the deeper, blacker part of the hair. 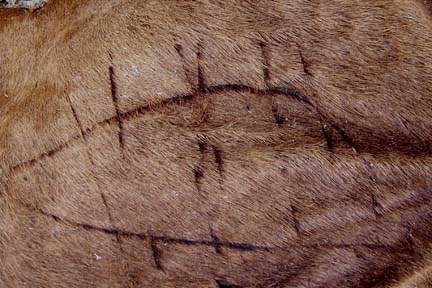 But what happened before the family found the odd pattern and triangular punctures on the long-dead cow is what 16-year-old Evan Briese saw near the water pond at 12:30 a.m. on April 6, 2006. Evan had left the farm house around midnight to go check the cows that were ready to calve. With him was his cattle dog, Buster. The cows seemed fine and Evan and Buster were heading back to the farm house when Evan saw a light flash that seemed to curve over a hill to the east of them. He started walking toward the pond and said he could see blue beams flashing repeatedly.

As Evan reached the top of a hill, he was looking down on a wedge-shaped craft at the far end of the water pond about 140 yards away. Shining from large ovals in the side of the object was blue light. In the satellite image of the farm below, the craft is depicted as the blue triangle on the east side of the water pond in front of the dead cow.

Evan Briese, 16-Year-Old Son:   “Just as I was reaching the top of the hill where there is an embankment down to the dugout (water pond), I got to the top of it and saw a UFO sitting by the dugout.

IT WAS AS IF THEY WERE LOOKING FOR SOMETHING?

HOW BIG DO YOU THINK THIS TRIANGLE WAS?

About 40 feet long, I suppose.

HOW WIDE DO YOU THINK THE TRIANGLE WAS?

SO, IT WAS ABOUT HALF AS WIDE AS IT WAS LONG?

HOW HIGH WOULD IT BE FROM THE GROUND UP?

IT WAS PRETTY NARROW FROM THE TOP TO THE BOTTOM?

Yeah, it was real low profile. We just stood there and looked at it for probably 30 seconds, something like that. Even he (Buster) was in shock, you know?

EVEN YOUR DOG WAS IN SHOCK?

Yeah. If it was something that he knew what it was – like he knows vehicles and all that stuff. So he would have run up to it right away and tried to be its buddy. But he even sat and looked at it with me.

DID HE WHINE OR SHIVER OR ANYTHING?

No, because after a certain amount of time that we looked at it, he shot down there after it.

AS YOUR DOG STARTS RUNNING TOWARD THE TRIANGULAR VEHICLE, WHAT HAPPENED?

I just sat and watched it until finally I seen him (Buster from) kind of off the glow (blue beams). Then I could see him running down there and then pretty soon he started barking. Then it (craft) took off. It was out of there!

WHEN IT TOOK OFF, DID IT MAKE NOISE? WHAT HAPPENED?

Completely silent. Not a sound.

THAT MUST HAVE BEEN EERIE?

Yes, it was strange.

AS IT TOOK OFF, DID IT TAKE OFF SLOWLY FIRST AND THEN SPEED UP, OR WHAT?

It just kept a certain speed until it went all the way up and then I couldn’t see it no more.

AFTER IT ZIPPED AWAY, WHAT DID YOU AND BUSTER DO?

Ran back home and came in and woke Mom and Dad up and told them what it was.”

[ Editor’s Note: By the time that Evan reached the house, Myra and Torrey Briese had waked up by a sound they had not heard before, which shook the windows in the house. “A roaring sound,” said Torrey. Evan heard it also as he ran home. ]

Torrey Briese, Father:  “That craft that he seen sitting there was sitting between the banks (of water hole) on the east side, on the far side of the water. And that craft was sitting on the same side that the dead cow carcass was.

SO WHATEVER WAS IN THE TRIANGULAR CRAFT THAT SET DOWN AT THE WATER HOLE MIGHT HAVE MADE THE ‘CALLING CARD’ SYMBOL IN THE HIDE OF THE ALREADY-DEAD COW?

Right. Could very well have. And you know, all my neighbors are cattlemen and have looked at it (dead cow hide pattern). They couldn’t determine when this had been put on the cow. I know it was not on the cow last fall, so it (strange pattern) had to have gotten on after the hair fading (from sun bleaching) because it was a black Angus cow. Well, the reason the black hair (pattern) is there is because whatever put this mark on there cut away the bleached hair. Whatever etched that on there, cut it on there, or whatever word you want to use – done it a long time after this cow had died.”

Four months later on July 20, 2006, around 11 p.m., Torrey was helping one of his neighbors whose car was being repaired. The two men were headed to pick up the car when they both saw a blue light in the night sky. The blue light was making an L-shaped pattern, as if searching for something. Torrey would stop the car to watch more carefully. At the same time, the blue light would stop instantly. When he moved the car, the light would move very rapidly. For more than a half hour, Torrey repeatedly stopped and moved the car and the light would react by stopping instantly and moving rapidly as well. Eventually, the blue light took off rapidly. Torrey said he wondered could that blue light be the same craft that set down near the water hole in April.

Then in August about 2.5 miles northeast of the farm house, Torrey was moving cattle out of his bull pasture. Myra and the kids were about a mile away. Torrey was on his motorcycle that had a broken headlight. So, there was no light on the ground. But suddenly in the sky, lights appeared that moved around in odd searching patterns for at least an hour.

Torrey Briese:  “I got to the crest of the hill and looked southeast and there in the gullies, I seen some real bright lights. They weren’t a blue light, they weren’t a green light – they were just lights and very bright – more like a car headlight. I stopped the bike and sat there and watched. It was totally silent, but there was like tens of lights, not two or three lights. There was bunch of them. I started the bike and went down so I could move the cattle through the gate. As I got down to the gate on the bike, one of these lights came our direction. I started getting a little concerned because it started illuminating the pasture to the south of us like almost daylight. It illuminated acres, like 30 or 40 acres!

These things would come at us – they were a ways off, about two miles away. Then all of a sudden they would divide into like three (lights) and go – well, if you took an intersection sign and drew a straight line down the middle and two branching off to the side. Then they would go down into the gullies and you could see one for awhile and then one would come up and from the other side another would do the same. They did this pattern over and over.

WHATEVER THEY WERE DOING, IT WAS LIKE A SEARCHING OPERATION?

Yes, it was like they were looking for something.

MYRA, TESSA AND EVAN – DID THEY HAVE ANY REACTION THEMSELVES?

They were scared, and yet they were curious. They wanted to watch it.”

Continued in Part 2:  Encounter with Non-Human Entities in Pig Corral 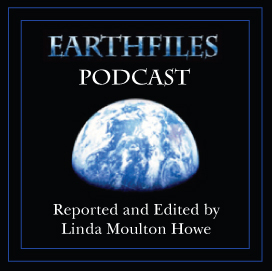 If viewers have more information about conscious encounters with non-human entities and unidentified aerial craft and/or animal mutilations, please email me: [email protected]

For further information about worldwide animal mutilations, please see reports below in the Earthfiles Archives and my books, An Alien Harvest and the 2-volume Glimpses of Other Realities, in the Earthfiles Shop.