“I was repeatedly stalked by something at our vineyard property in Dundee, Oregon - something that would stand at the windows, leave palm and nose prints, and scare the very sense out of my cats from a dead sleep.” 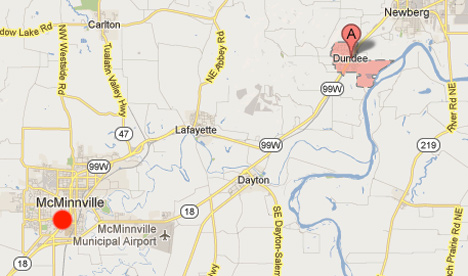 McMinnville, Oregon, is where on May 11, 1950, Mr. and Mrs. Paul Trent saw an aerial disc silently approach their house around 7:30 PM. The couple said the aerial object was very bright, almost silvery. Mrs. Trent ran indoors to get a camera to take to her husband, who took two photographs before the unidentified object moved away rapidly to the northwest. The photographs were studied by commercial photographers and by the Condon Committee at the University of Colorado. The consensus was that the Trent photographs were genuine. 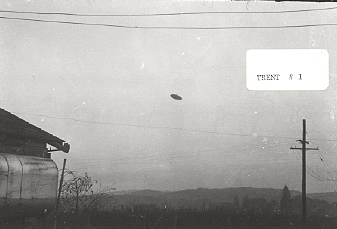 First of two disk photographs taken on May 11, 1950, at 7:30 PM by Paul Trent in McMinnville, Oregon. Physicist Bruce Maccabee, commercial photographers and the analyst for the Condon Committee at the University of Colorado in 1966-1968, studied the negatives and prints and concluded the photographs were genuine. Photograph © 1950 by Paul Trent. 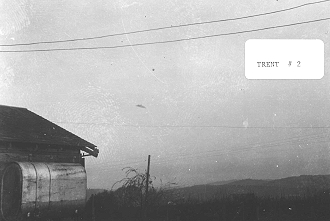 Second of two disk photographs taken on May 11, 1950, by Paul Trent in McMinnville, Oregon. Photograph © 1950 by Paul Trent.   December 29, 2012  Dundee and Yamhill, Oregon - After the recent Earthfiles reports about November 28 to December 5, 2012, mysterious attacks on goats and bull calves in Waddy, Kentucky, and November to December 2012 sheep attacks in Worcester, England, I received the following email. [ See 122412 Earthfiles.]