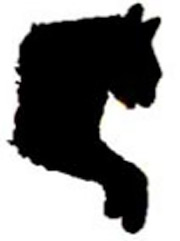 — “Charlie's body had been cut in half with a sharp object and displayed
so that he would be discovered by the horrified public.”

— “Several cats have been found cut in half in Wheat Ridge. It is common.”

Reprinted August 12, 2019    Albuquerque, New Mexico - Since the 1970s, there have been hundreds of reports about bloodless half-cat mutilations in the United States, Canada, England and Singapore as well as other bloodless, mutilated animal reports around the world — even kangaroos in Australia. The following is an historic overview concentrated on bloodless half-cat mutilation reports from current August 2015 going backwards in time to the 1970s. The photographs are provided throughout to underscore the surgical, bloodless nature of this strange global phenomenon.