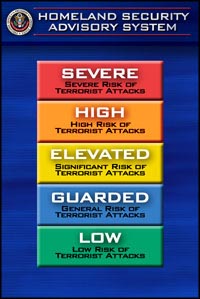 May 23, 2003  Harrisburg, Pennsylvania - This week Homeland Security Secretary Tom Ridge raised the terrorist threat level to Orange and told the House Select Committee on Homeland Security that the terrorist attack drills held in Seattle and Chicago two weeks ago showed there are definite problems in the nation's ability to respond. The exercises ­ called TOPOFF2 because "top officials" participated - were the largest security drills the U. S. government has ever played out. Seattle emergency responders were challenged with a dirty bomb; in Chicago the scenario was a bioterrorist attack of pneumonic plague. The exercises lasted a week and involved dozens of federal, state and local emergency-response agencies.