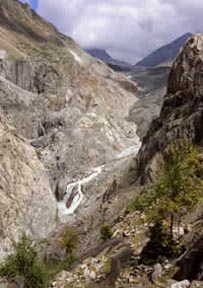 November 29, 2003 Milan, Italy – The World Wildlife Fund (WWF) released its new report this week about climate change and global glacier decline which headlines, “Unless governments take urgent action to prevent global warming, billions of people worldwide might face severe water shortages as a result of the alarming melt rate of glaciers.” Glaciers have contained 70% of the world’s freshwater reserves. But only a 4 degrees Celsius global temperature warming by the end of this 21st Century would “eliminate almost all of them.” Greenland ice sheets could be triggered to a complete melt-down with only a temperature increase of 2-3 degrees Celcius.

Current expectation for global warming temperature increase over the next 100 years: 1.4-5.8 degrees Celsius.

WWF sights examples of glacier retreats on all continents:

The Worldlife Fund is urging the governments of more than 180 countries attending the United Nations 9th Conference of the Parties (COP9) at the Framework Convention for Climate Change (UNFCCC) December 1-12 in Milan, Italy, to speed up action to combat climate change.

Jennifer Morgan, Director of WWF’s Climate Change Programme said, “Glacial meltdown is a clear signal that we must act now to fight global warming and stop the melting. COP9 must make it clear to the world that a multi-lateral approach to climate change is the only way forward, that Kyoto will soon enter into force and that international cooperation is well on track to tackle climate change.” But neither the United States nor Russia has ratified the Kyoto Protocol.