“How it got there in such an eccentric orbit that comes as close as 76 astronomical units to our sun and goes all the way out to nearly 1000 astronomical units away is a complete mystery! There might still be something else out there causing this object's peculiar orbit.” 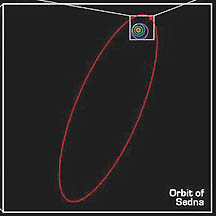 March 15, 2004 Pasadena, California - The first sight of a mysterious object moving slowly like a planet at the outer edges of our solar system was on November 14, 2003. The discoverers were astronomers Michael Brown at the California Institute of Technology and his colleagues, Chad Trujillo of the Gemini Observatory in Hawaii, and David Rabinowitz at Yale University. They have been working together on a NASA-sponsored project, Near Earth Asteroid Tracking (NEAT). The team contacted other astronomers who began to look for the object first labeled "2003 VB12" and is now unofficially dubbed "Sedna," the name of an Inuit woman in the Arctic who was thrown from a kayak by her frightened father. Here fingers became the sea creatures. Sedna is definitely a cold place, probably the coldest object in our solar system, with temperatures never rising above MINUS 400 degrees Fahrenheit.