August 10, 2004 – Tonight I received an e-mail from Mathias van Singer, one of the Swiss passengers in Peter Tadd’s Fast Helicopter tour of crop formations on July 29, 2004. Originally, the helicopter pilot, Mr. Tadd and the Swiss tourists thought the “serpent” pattern appeared within one hour between Noon and 1 p.m. However, later it was confirmed that the farmer found the pattern at 5 a.m. that morning and crop circle researcher, Jonathan Sherwood, visited the site at 11:30 a.m. But the Swiss helicopter passengers are the only known group to get aerial photographs of the wheat formation before the farmer cut it out early the next morning.

Here are four aerials attached to Mathias van Singer’s e-mail of the “serpent” pattern, followed by an excerpt from my August 3, 2004 Earthfiles report about crop formations in England, including the West Overton pattern. 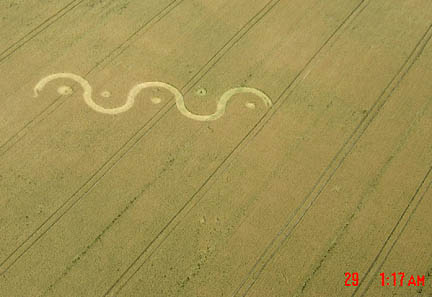 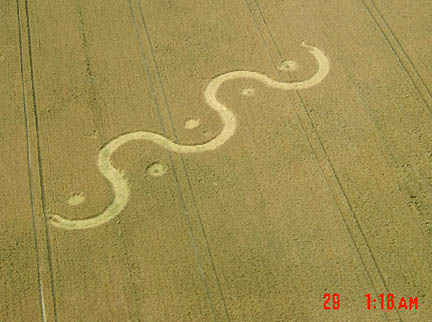 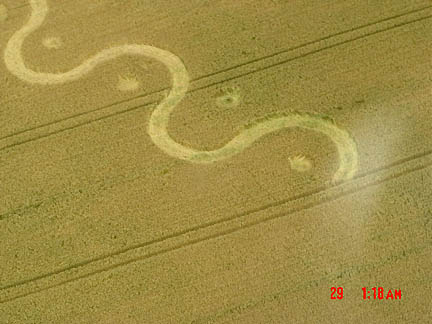 The morning of July 29, 2004, Peter Tadd from Ireland had hired Fast Helicopters at Thruxton Airport in Hampshire to fly his Swiss tour group a couple of people at a time for twenty minute excursions over crop formations. Peter has been returning to Wiltshire with tourists to explore crop formations since 1996. On July 29, 2004, during the sixth helicopter trip, pilot Peter Vellacott thought he spotted a brand new formation in a West Overton wheat field that he had not seen on his previous five flights. Peter Tadd’s Swiss group excitedly took photographs of what they thought was a “miracle” pattern that had formed in twenty minutes while they were flying. By 1:30 p.m., all had flown and the group immediately headed for the West Overton S-shape, or “serpent.”

“I was lucky enough to be the first person to go in and it was quite a beautiful, not large design. I would say the overall length of the serpent might have been 60 to 70 feet. But the details – what they call the lay of the crop on the ground – was so extraordinary. Along this undulating serpent, the wheat had been laid in such a way as to give almost a sense of like a diamond-back rattlesnake. As we walked along, the wheat was all laid in one direction on the two sides and there was this pattern in the middle (of plants laid back and forth on each other). As we walked, we also noticed there were three small circles, one each in the wave-like pattern of the serpent.

There was a young 15-year-old boy with me who has been somewhat questioning the reality of these crop formations and how they are made. Then he looked at the perfect little circles and saw there was no entrance from outside. There was no way the circles could have been created without disturbing the wheat around them – he was convinced that this could not have been made by any person.

At the very end of this formation, there was a tail that wrapped around itself in a very beautiful flowing way. Then, on either side of that tail were two small, sort of teepees made of maybe a dozen stalks of wheat, twisted in just a perfect form. I had a sense of power of this being very delicate and very moving and needing to be honored, so that we could not walk back along the path of the formation. It was going against the energy current and it was actually creating some discomfort for all of us to even attempt it. So, we went back along the tramlines which are the tractor paths where no wheat grew.”

Peter Tadd also talked with Stuart Dike from Cropcircleconnector about the helicopter pilot’s discovery of the pattern during the sixth flight at mid-day and Stuart wrote about it on the Connector. Word spread and on July 30, Bert Janssen from Holland called to tell me about the sudden mid-day emergence of the West Overton serpent pattern.

But Lucy Pringle also called me today to tell me that Alton Barnes crop circle researcher and businessman, Jonathan Sherwood, had not only talked to the farmer who said he saw the serpent pattern at 5 a.m. that morning, but Jonathan had gone to the West Overton site himself at 11:30 a.m. and looked at the crop formation from the side of the road. Thus, the “serpent” was definitely in the wheat all morning of July 29, 2004, while the Fast Helicopter tour flights were taking place.

“Mike Harris (from Dartmoor), who was sitting over at Alton Barnes, rang me up and told me about it over the mobile. I said I was in Avebury and would just cut through West Kennett on the way back, so that’s what I did. He came up this year from Dartmoor just to drive around in his blue bus to look for patterns, like I do. He said he was heading back to Alton Barnes to the car park at the top of the hill. So I said I would go past there and take a look and when I got there, I thought, ‘Gee, that’s tiny!’ Had a quick look at it from the car. But I had an appointment to get to as well, so I just stopped the car, got out and stood by the field, and planned to see it again later in the day.

SO, THE PILOT AND SWISS PASSENGERS ARE NOT CORRECT ABOUT THE FORMATION NOT BEING IN THE FIELD BEFORE THE NOON TO 1 P.M. TIME.

Right, because I saw it myself at 11:30 a.m. But it would have been easy to miss from the air. The pathway of the S-shape or ‘serpent’ would not have been very wide, no more than 3 feet wide if that. A real skinny thing.

Later, around 6 p.m., Mike Harris, Tom and Kerry Blower and I returned to the field. The farmer was very angry and throwing people out and went up the hill. So, I went up after him with Mike and I gave him my business card. The farmer said the pattern was there early in the morning at 5 a.m., that he had been throwing people out all day, and that he was going to get rid of it because he didn’t want people messing up the rest of his field. And he cut it out the next morning (July 30, 2004).”