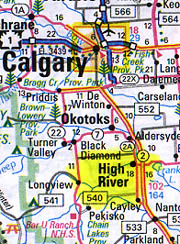 “Some multi-directional lay in circle. Counterclockwise lay in ring. Land is gently hilly in the field. Barley is still quite green, may not be swathed for a couple of weeks yet.

“The formation has already been visited by a number of people. No tracks reportedly were seen initially, but there are not quite a few from all the visitors. The land manager (not owner) is calling it ‘vandalism,’ so he does not want any publicity. A few people reported cell phone problems inside the formation.” 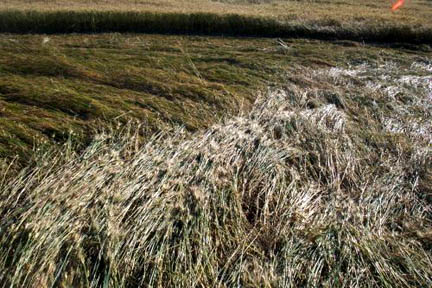 A simple circle was reported in wheat near Steelman, Saskatchewan, on August 27, 2005. The circle measured 23 meters (76) feet and the plants had been laid down counter-clockwise. This 2005 circle is near two other simple circles found in 2003.

In 2003, Paul Anderson’s CCCRN Website reported about two simple circles that were discovered near Steelman on nearly the same date as the August 27, 2005, circle.

“The second formation of this 2003 year was near the Midale “hot spot” region of Saskatchewan and was another classic simple circle. …It was first spotted on August 25 by pilot and CCCRN field research assistant John Erickson from nearby Estevan.

“On August 25, 2003, a simple single circle, the formation was again close to the edge of a road. The size of the circle was almost exactly the same as the first one, the diameter varying slightly from 16 meters (52 feet) to 16.25 meters (53 feet), with the mature wheat plants again flattened counterclockwise in an impressive tight, flat spiral pattern. It was like a carbon copy of the first circle in Steelman (this year), although in this case the field had already been harvested. With the plants pressed flat to the ground however, the circle itself was still quite intact and in good condition by the time of our investigation. …While stretched nodes or nodes with expulsion cavities weren’t found, stems with twisting below the seed heads were, similar to other cases in Canada this year at Revenue, Saskatchewan and Wallacetown, Ontario and in Canada and other countries in other recent years.”

A rancher was harvesting two pea fields on opposite sides of a road on August 14, 2005, when he found a downed circle of plants in each field. The two fields were an eighth of a mile apart. The rancher walked off each circle at about 39 feet in diameter. Four days later, on August 18, 2005, his brother found one of their best 4-month-old bull calves dead and mutilated. That pasture is about eighteen miles from the pea fields. See Earthfiles 082605 for more details.

See http://www.cccrn.ca/ for more information about the 2005 Canadian crop circle phenomenon as it unfolds and the archives of previous years.

For other Earthfiles reports about U. S. crop formations, see Earthfiles Archives: