March 24, 2006 – Since reporting in the March 8, 2006, update about the New Jersey survey engineer’s photograph of a ball of light, I received other similar glowing orb photographs which I posted as updates to the 030806 Earthfiles.

Since then, I have received two more unusual orb photographs I would like to share.  These contain spiral structures inside the orbs that are peculiar, hard to explain and have also turned up in some photographs at crop formations the past few years.

I was reading your website, Earthfiles.com, especially taking note of the unusual light photographed by your surveyor friend in New Jersey. There was another photo in the article taken in Wisconsin in which the ‘light’ appeared to have structure. Interestingly, I have a photo from my archives, taken in June 2003, which has a very similar anomaly. It was taken at a Holiday Inn in Brookline, Massachusetts. My family laughed when they saw the photo since it looks like my son is swinging at the ‘ball.’ In fact, there was no ball. I had always assumed the ‘ball’ was a digital photo artifact and nothing more. The photo was taken with a Canon Powershot A60 digital camera. I am an engineer and am, consequently, very skeptical of any supernatural origins!

I took the photograph to a couple of local camera shops, Hunts Camera and Video and Ritz Camera, both in South Portland, Maine. At Hunt’s, the two people I spoke to said they had never seen such an anomaly, but thought it was external to the camera. This was because a blow-up of the image showed chromatic aberration, structure and shadow. The only explanations they could offer were dust on the lens or something in the air that would have triggered the flash. I explained that dust on the lens was unlikely because photos taken immediately before and after did not have the anomaly. If it was something in the air, we did not see it.

At Hunt’s, they had no clue as to what caused the image, having never seen anything like it before either. They, too, thought it was external to the camera. They offered to check out the camera if it appeared gain. I suspect that will be unlikely because this is the only time in hundreds, if not thousands, of photos that the anomaly has appeared. Please feel free to post it to Earthfiles. I would be very interested if anyone else has an explanation. 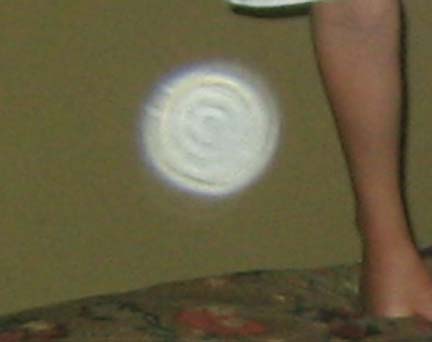 A few weeks ago I went to Eureka Springs (Arkansas) with my sister and an old friend for a weekend. We stayed at the Crescent Hotel which was built about 1885 and is supposed to be haunted. After taking numerous photos with my Sony 7.2 megapixel cyber shot camera which showed more anomalies than I ever imagined I would get, I have come to believe that may be the case. Most of the really strange pictures were taken in our room.

After a while orbs became a dime a dozen – there were so many of them and everyone was getting pictures of them. But in our room, to the left of the headboard of one of the beds, is a large white oval that I took 11 pictures of over three days. It would come and go but it always would be in the same location. Most of the photos were taken on our first night there.

I awoke at 6:00 a.m. the next morning and even though it was still dark I took a picture of my sister sleeping and the thing was still there. I only got one picture of it that night, but the next morning when we were ready to check out, I took a few more shots to see if I could get anything and there it was again. My friend had a regular camera and she also got a picture of it although it did not come out as well as mine.

These are the first two pictures I took in our room that evening while my sister was watching T.V. I don’t know enough about digital cameras to know if the glare on the pillow and behind my sister are from a problem with the camera or not (but I think not). When we went on the ghost tour at the hotel we were told that if we got a picture of an orb to take another one because the orbs moved. I wound up taking over 75 pictures looking for orbs and anything else that might pop up.

Do you have any idea what this thing could be? Have you ever seen anything like it? The hotel has a web site that tells the history and a few ghost stories. This hotel was also featured on an episode of Ghost Hunters that is on the Sci-Fi channel and I think it is supposed to air again at the end of this month. 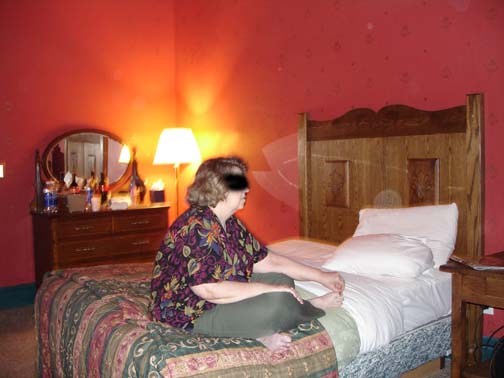 “I am sending you another photo I took last summer when we went to Washington D.C. This picture was taken during a tour of the Capitol Bldg. and the room is the old Supreme Court Room. After my weekend at the Crescent I started looking back at all my other pictures I had taken with my digital camera. I was surprised at how many orbs I found – I had never noticed them before. I am willing to bet that many people have pictures of orbs that they don’t know about. There were a lot in our room and on the ghost tour. You can put this photo on your website also.
Susan Saffa
Tulsa, Oklahoma”

For more information about mysterious orbs and lights, please see the following reports in  Earthfiles Archives. Also see my book, Mysterious Lights and Crop Circles in the Earthfiles Shop.