“The perpetrators of the worldwide animal deaths
are extraterrestrial biological entities.” 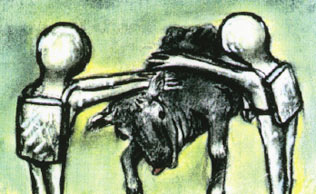 March 14, 2016 Albuquerque, New Mexico - When I began my investigations for the TV documentary A Strange Harvest in 1979 about bloodless, trackless animal mutilations, I did not set out to do a film about a UFO and E. T. connection. But that’s what I kept hearing from law enforcement and eyewitnesses, who had seen orange, silent, glowing objects the size of football fields hovering above pastures where mutilated animals were later found. Or had seen beams of light shining down from “silent helicopters” that lighted pastures “brighter than daylight,” and the next day mutilated animals were found where the beams touched the ground. Some ranchers had even seen animals rising in a beam of light or lowered in a beam of light dead and mutilated, but would not talk on film for fear of ridicule.