“Examination of remains recovered from wreckage of UFOBs indicates that Extraterrestrial Biological Entities may be classified into two distinct categories as follows:  a. EBE Type I. and EBE Type II.

… It is not definitely known where either type of creature originated, but it seems certain that they did not evolve on earth. It is further evident, although not certain, that they may have originated on two different planets.”

June 5, 2021  Albuquerque, New Mexico – The following 30 pages were assembled by Robert M. Wood, Ph.D., and his son Ryan Wood from the photographic prints made from the original 35mm black and white negative film that was sent anonymously in a package addressed to Don Berliner at the Fund for UFO Research in Maryland. The package was postmarked March 7, 1994, from LaCrosse, Wisconsin, and bore a return address of a pharmacy in LaCrosse. On the 35mm film were thirty-two pages of text and drawings. In this manual version, Pages 26 and 27 are blank — perhaps because there had been actual photographs of extraterrestrial biological entities, which might have been ordered removed before printing the original 1954 SOM1-01 manual for reasons unknown.

Pages 26 and 27 are blank in this re-constituted SOM 1-01 from the original 35mm B&W negatives. Bob Wood said in the original training manual there were photographs of actual extraterrestrial biological entities not included in this anonymously photographed version. 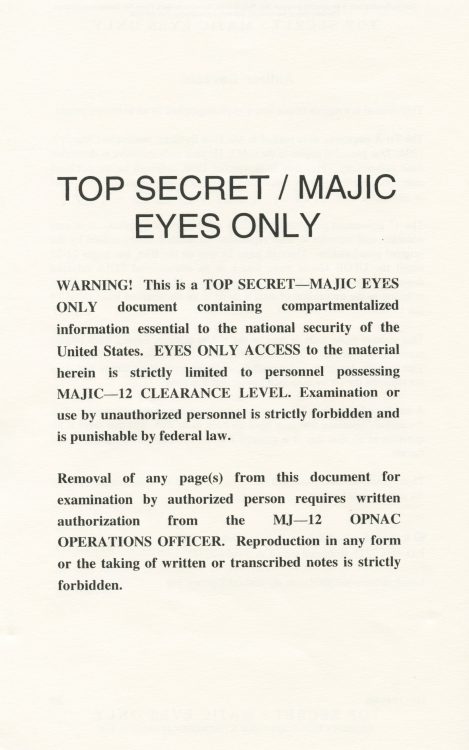