July 24, 2021  Pasadena, California – Like Earth, Mars heated up as it formed from the dust and larger clumps of meteoritic material orbiting the Sun in the early solar system. In the beginning, Mars separated into three distinct layers: crust, mantle and core. Now, the Martian crust is thinner than expected and might have two or even three sub-layers. It goes as deep as 12 miles (20 kilometers) if there are two sub-layers, or 23 miles (37 kilometers) if there are three. Beneath that is the mantle, which extends 969 miles (1,560 kilometers) below the surface. 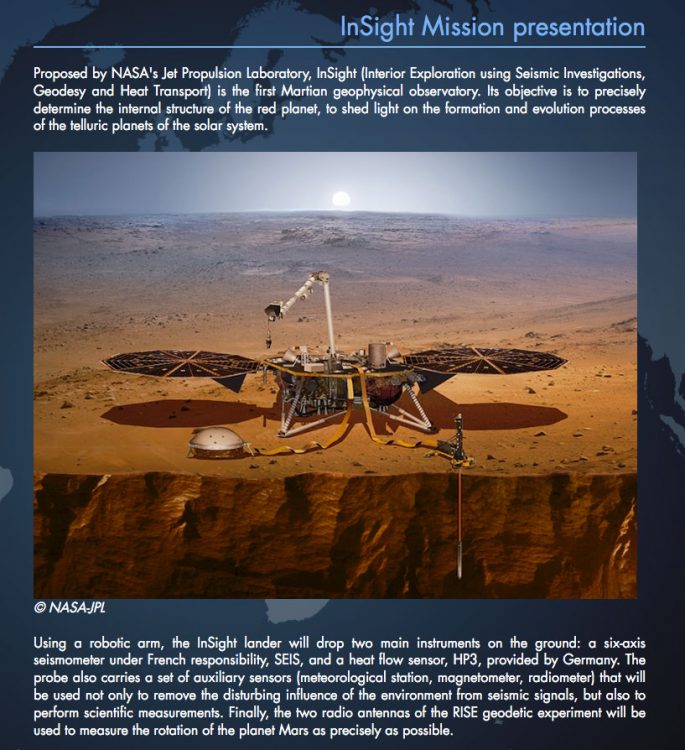 At the heart of Mars is the “surprisingly large” core, which has a radius of 1,137 miles (1,830 kilometers). Confirming the size of the molten core was especially exciting for the team. “This study is a once-in-a-lifetime chance,” said Simon Stähler of the Swiss research university ETH Zurich, lead author of the core paper. “It took scientists hundreds of years to measure Earth’s core; after the Apollo missions, it took them 40 years to measure the Moon’s core. InSight took just two years to measure Mars’ core.”

Scientists were surprised that the most significant detected Martian quakes were NOT from Tharsis and Olympus Mons, the three biggest volcanoes on the red planet. Instead, the most significant Martian quakes have come from only one area: Cerberus Fossae. It’s a region volcanically active enough that lava might have flowed there in the last few million years. NASA notes that orbiting spacecraft have spotted tracks of boulders rolling down steep slopes, possibly shaken loose by Mars quakes.

NASA InSight:  “The SEIS seismometer on NASA’s InSight lander recorded a total of 174 low-intensity Marsquakes between February and end end of September 2019. With the help of models of the propagation of seismic waves in the Martian subsurface, the probable source of two larger quakes could be determined quite accurately. Those Marsquakes occurred in the Cerberus Fossae region, a young volcanic area about 1,700 kilometers east of the InSight landing site located in Elysium Planitia. Red lines on the map show known fault zones. This topographical map is based on laser altitude measurements performed by NASA’s Mars Global Surveyor spacecraft in 1999 to 2006 observations. This shows height differences from as deep as 3,000 meters (blue-green) to plus 7,000 meters at the top of Elysium Mons, surrounded by red in the map illustration of the Elysium volcanoes.”

NASA’s InSight lander detected a Marsquake, represented here as a seismogram, on July 25, 2019, the 235th Martian day, or sol, of its mission. Seismologists study the wiggles in seismograms in order to confirm whether they’re really seeing a quake or noise caused by wind.