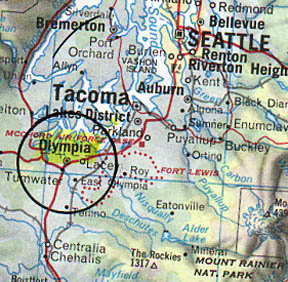 January 31, 2003  Olympia, Washington –  On Thursday, January 30, 2003, Associated Press and local media in Olympia and Seattle, Washington, reported that a man’s body had been found forty feet up in a tree inside the Olympia city limits. Police got it down and transferred to the Thurston County Coroner’s Office. This morning, I talked with Deputy Coroner Terry Harper who confirmed that the official cause of death is “cerebral anoxia and suicide.” That means lack of oxygen to the brain caused by hanging.

Mr. Harper said that the victim was Mark Steven Budd, 39-years-old when he committed suicide in the tree several months ago. His mother, who lives in San Diego, told the coroner that her son had a history of depression, substance abuse and even attempts at suicide by hanging before. Apparently Mr. Budd had “camped right at the base of where this tree was. And he had been staying out there for quite some time.”

Terry Harper, Deputy Coroner for Thurston County, Coroner’s Office, Court House, Olympia, Washington: “What we have been able to find, it looks like the person has been up there a little less than a year. It looks like he climbed forty feet up in the tree and tied a rope around his neck and hung himself.

HE WAS NOT SLUNG OVER BRANCHES AS IF HE HAD BEEN DROPPED FROM SOMETHING?

WAS THE MAN IN A SKELETAL STATE HAVING BEEN UP IN A TREE FOR MONTHS?

Yeah, pretty much. His flesh was very hard and dry. His flesh was more or less mummified. He was whole and mostly skeletal underneath. There was some hardened muscle tissue and unrecognizable remains of organs. He was pretty much a skeleton and skin.

THERE HAD BEEN NO SCAVENGING ON HIM BY SMALL ANIMALS?

No small animals, it did not appear. Mostly just your standard flies and a little bit of ant activity, but he was quite a ways up in the tree, so it kept him clear of most of those things.

YOU WOULD THINK THAT MAYBE EVEN SQUIRRELS OR BEARS OR SOMETHING MIGHT CLIMB A TREE IF THERE WAS A HUMAN BODY HANGING THERE?

You might think, but this tree was in the city limits of Olympia. Large scavengers and predators probably don’t even hang out down there. As far as maybe a opossum might try to go up that high, squirrels easily could. I don’t know. But for the most part, he was pretty clean.

DID YOU FIND THE EVIDENCE OF THE ROPE THAT HE HAD HUNG HIMSELF WITH?

Oh, absolutely. He was still connected. The rope appeared to have a nylon braid, so it was very durable.

IT WAS STILL AROUND HIS NECK?

THE PERSON WHO FIRST SAW HIM LAST YEAR DID NOT WANT TO REPORT SEEING A BODY IN THE TREE BECAUSE HE WAS AFRAID OF TANGLING WITH LAW ENFORCEMENT?

That’s the message that law enforcement gave me. Apparently he was just surprised that the person was still there and wanted to get it off his chest.

It is a sad story, but at least we were able to find someone. He could have been a very difficult person to identify. And families are always wondering. They need to know the reason they can’t find their loved one. They need to know the reason he is not at family events and holidays. The truth is hard, but I’m just glad we were able to identify him quickly and let them know.

SO THERE IS SOME CLOSURE.

Absolutely. Without it, you have none. You always wonder. You never know who that knock at the door is going to be. And even in their heart, they might know something is wrong. They still need to know. As well as other families who are looking for closure who this person (in the tree) is not connected with. They at least need to know that this is not their loved one because their anxiety levels go up as soon as they hear about an unidentified person. So, it affects a lot of people.”