Update September 9, 2003: Ted Robertson reports that when he and others were in the Serpent Mound, Ohio, soybean crop formation with the farmer’s permission on Friday, August 29, that evening some local people were driving by the field and did not know that a crop formation was there. But the travelers told Delsey Knoechelman that thought the soybean field was glowing and described the appearance as similar to turning on a car headlight in the middle of a field filled with fog. A similar glowing field phenomena has been reported in England as well.

September 6, 2003 Enschede, The Netherlands:
The Geometry of the Serpent Mound, Ohio Formation

Circle inside the small ring is 20 feet 1 inch in both north/south and east/west axis.

Bert Janssen, Crop Circle Documentary Filmmaker and Geometry Analyzer, Enschede, The Netherlands: “The geometry is at least as good as we find them in Wiltshire. Simple, elegant, eye-catching. It can be reconstructed, it does make sense and it is not a random collection of circles and rings. See my diagrams. First I included a diagram of the formation itself.

Then I made diagrams with red circles in them so you can see how the core of the formation is based on a Vesica Piscis. It is constructed by drawing two equal circles so that the center of each lies on the circumference of the other.

After that, the two red circles that form this Vesica Piscis are used again, but now their centers are on the intersection points of the first two red circles. 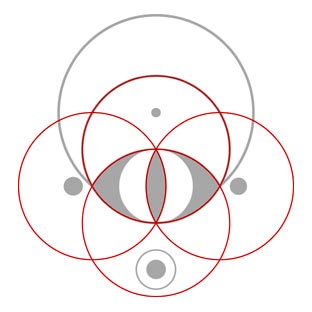 Interestingly enough, these four red circles form the basis of the two ‘Cats-Eye’ formations we had in Wiltshire at Fyfield near Marlborough on June 21, 1998, and Furze Hill the next day on June 22, 1998.

Are There Any Similarities with Morgan’s Hill,
Wiltshire, England, Reported August 3, 2003?

The Serpent Mound formation in Ohio is based on two circles – or three if you count the small one in the center of the Vesica Piscis as well. If this small one is 25, then the circles that form the Vesica Piscis are 50 and the larger circle is 66.144, a little more than 66. You can see that the ratios do differ a lot between the Morgan’s Hill and Ohio patterns.”