August 3, 2004 Southern England – A pictorial in chronological order from the most recent crop formation reported on July 31, 2004, in Kent County, England; preceded by two circles in Norfolk County on July 29; and thirteen in Wiltshire over twelve days.

Graham Tucker reported that the Nashenden Farm crop formation in Wouldham near Rochester, Kent, was “placed in a field which borders on an ancient way now known as the North Down Way, and very close to a tumulus that’s hidden within the surrounding copse. The formation is almost directly opposite the Water Board pumping station at Wouldham, separated by the new Channel Tunnel rail link. We spoke to a guy who lives within these confines and he said it wasn’t there the previous evening, but to his surprise it was there at 4.30 a.m. (July 31, 2004).  His friends were camping overnight in a caravan very close to the field and they didn’t hear or see a thing! We are grateful to the micro light pilot from Rochester Airport who alerted us to this formation.” 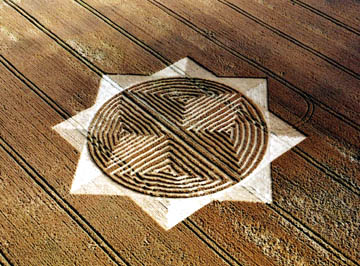 American crop circle researcher and author, Barbara Lamb, discovered a dead bird beneath a section of flattened crop in the West Kennett formation on July 29. Bert Janssen from Holland took photographs of the bird where it was found and Andreas Mueller from Germany sent me the following e-mail:

“A strange discovery by Barbara Lamb was made on July 29, inside the new formation below the West Kennett Long Barrow near famous man-build ancient mound Silbury Hill and Avebury Stone circle in Wiltshire.

Just underneath the flattened crop, the body of a dead bird was found. While it was completely covered by the lay and therefore must have been there since at least the very early morning that day, the body was still soft. Also, the body was placed gently with the flow of the flattened plants and the direction of the planted crop. Strangely, the body was also not damaged or squashed, either by the postulated circlemaking force, stomping hoaxers or even by later visitors.

It is not clear if the dead bird and its placement is connected to the forming of the formation, or if two strange events happened at the same time at the same place? The (bird’s) body was collected and will be investigated by a veterinarian.” 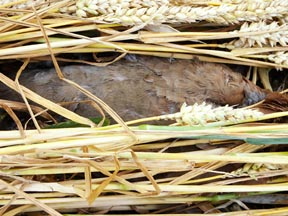 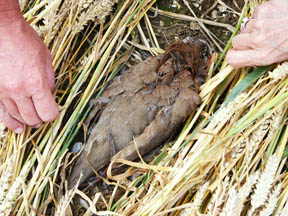 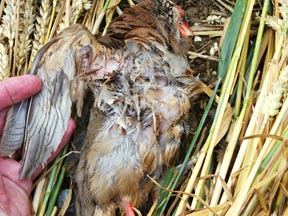 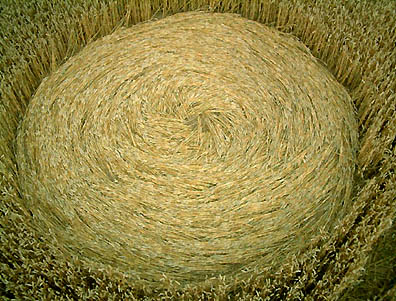 4) West Overton Near Avebury, Wiltshire, Reported July 29, 2004The morning of July 29, 2004, Peter Tadd from Ireland had hired Fast Helicopters at Thruxton Airport in Hampshire to fly his Swiss tour group a couple of people at a time for twenty minute excursions over crop formations. Peter has been returning to Wiltshire with tourists to explore crop formations since1996. On July 29, 2004, during the sixth helicopter trip, pilot Peter Vellacott thought he spotted a brand new formation in a West Overton wheat field that he had not seen on his previous five flights. Peter Tadd’s Swiss group excitedly took photographs of what they thought was a “miracle” pattern that had formed in twenty minutes while they were flying. By 1:30 p.m., all had flown and the group immediately headed for the West Overton S-shape, or “serpent.”

“I was lucky enough to be the first person to go in and it was quite a beautiful, not large design. I would say the overall length of the serpent might have been 60 to 70 feet. But the details – what they call the lay of the crop on the ground – was so extraordinary. Along this undulating serpent, the wheat had been laid in such a way as to give almost a sense of like a diamond-back rattlesnake. As we walked along, the wheat was all laid in one direction on the two sides and there was this pattern in the middle (of plants laid back and forth on each other). As we walked, we also noticed there were three small circles, one each in the wave-like pattern of the serpent.

There was a young 15-year-old boy with me who has been somewhat questioning the reality of these crop formations and how they are made. Then he looked at the perfect little circles and saw there was no entrance from outside. There was no way the circles could have been created without disturbing the wheat around them – he was convinced that this could not have been made by any person.

At the very end of this formation, there was a tail that wrapped around itself in a very beautiful flowing way. Then, on either side of that tail were two small, sort of teepees made of maybe a dozen stalks of wheat, twisted in just a perfect form. I had a sense of power of this being very delicate and very moving and needing to be honored, so that we could not walk back along the path of the formation. It was going against the energy current and it was actually creating some discomfort for all of us to even attempt it. So, we went back along the tramlines which are the tractor paths where no wheat grew.”

Peter Tadd also talked with Stuart Dike from Cropcircleconnector about the helicopter pilot’s discovery of the pattern during the sixth flight at mid-day and Stuart wrote about it on the Connector. Word spread and on July 30, Bert Janssen from Holland called to tell me about the sudden mid-day emergence of the West Overton serpent pattern.

But Lucy Pringle also called me today to tell me that Alton Barnes crop circle researcher and businessman, Jonathan Sherwood, had not only talked to the farmer who said he saw the serpent pattern at 5 a.m. that morning, but Jonathan had gone to the West Overton site himself at 11:30 a.m. and looked at the crop formation from the side of the road. Thus, the “serpent” was definitely in the wheat all morning of July 29, 2004, while the Fast Helicopter tour flights were taking place.

“Mike Harris (from Dartmoor), who was sitting over at Alton Barnes, rang me up and told me about it over the mobile. I said I was in Avebury and would just cut through West Kennett on the way back, so that’s what I did. He came up this year from Dartmoor just to drive around in his blue bus to look for patterns, like I do. He said he was heading back to Alton Barnes to the car park at the top of the hill. So I said I would go past there and take a look and when I got there, I thought, ‘Gee, that’s tiny!’ Had a quick look at it from the car. But I had an appointment to get to as well, so I just stopped the car, got out and stood by the field, and planned to see it again later in the day.

SO, THE PILOT AND SWISS PASSENGERS ARE NOT CORRECT ABOUT THE FORMATION NOT BEING IN THE FIELD BEFORE THE NOON TO 1 P.M. TIME.

Right, because I saw it myself at 11:30 a.m. But it would have been easy to miss from the air. The pathway of the S-shape or ‘serpent’ would not have been very wide, no more than 3 feet wide if that. A real skinny thing.

Later, around 6 p.m., Mike Harris, Tom and Kerry Blower and I returned to the field. The farmer was very angry and throwing people out and went up the hill. So, I went up after him with Mike and I gave him my business card. The farmer said the pattern was there early in the morning at 5 a.m., that he had been throwing people out all day, and that he was going to get rid of it because he didn’t want people messing up the rest of his field. And he cut it out the next morning (July 30, 2004).”

Fast Helicopters pilot, Peter Vellacott, told me one of his colleague pilots recently watched his fuel guage move erratically as he flew over a crop formation. And Peter himself has had several passengers experience camera problems. The latest was with photographer, Steve Alexander, over the Savernack Forest formation on the east side of Marlborough.

“Steve had big problems with his cameras over that one. I’ve never seen that before. I’ve been flying with Steve for six years and I’ve never seen him have problems with his cameras before. He did not understand it either. There is another lady I fly, Francine Blake ­ and she also has trouble with her cameras. And now she has gone back to manual cameras, so there aren’t so many electronic things to go wrong.”

SO THE CROP FORMATIONS ARE ACTUALLY FORCING PEOPLE TO CHANGE EQUIPMENT BECAUSE THERE HAVE BEEN SO MANY ELECTRONIC MALFUNCTIONS? 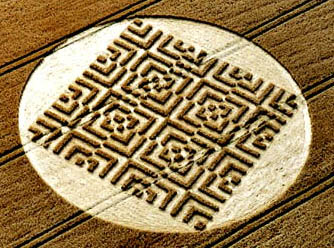 Peter Tadd took his Swiss tour group into the Savernake Forest pattern and told me:

“That was quite fascinating because I thought seeing the geometric pattern that looks a little bit like an Escher graphic (Dutch artist Maurits Cornelis Escher, 1898-1972). I was concerned it might be very uncomfortable inside there because of the way the 90-degree angles don’t quite meet. They are all kind of off one space. But instead, the flow of the crop was so fluid, when I went into the middle of it, all of a sudden I saw that it was a 2-dimensional representation of a 3-dimensional multiple-pointed star that was a kind of purple-blue-white in color. It seemed to represent some notion of the universe in its complexity that I don’t really understand, but it seemed like it was working with different levels of time – way beyond 3rd, 4th, 5h, 6th dimensions. Our sense of time is linear and that’s when we can feel stuck and frightened because we lose the sense of globalness. The bigger we can experience our self in a spiritual sense, the less constrained we are and the greater freedom we can experience.”

This pattern has been changing almost every day since its first discovery on July 28, 2004, when it did not have any “arms” or “tail” of circles. Change were still occurring today on Monday, August 2, 2004. Jonathan Sherwood told me that on the night of July 28-29, “through my night scope, we saw people (pull up in a car, go in, spend two hours moving about doing their thing. Then they left and in the morning was the first addition of the filled in arc that hadn’t been filled in the day before. And it had three added circles coming from the bottom. On June 30th, they added more pieces which are the curved circle arms on the sides. The following night, rings were added around the center line of circles. And heard even more was added today, August 2, but don’t know what it is yet.”

This was the official experiment on Tim Carson’s farm paid for by Joachim Koch, M. D., and Hans-Juergen Kyborg from Germany. This pattern also experienced an addition of a circle right in the center two days after the German experimenters created the crop formation.

This was the second formation of 2004 near Pewsey White Horse; two days later came the “chakra” formation next to it which was the third Pewsey pattern for the season.