April 12, 2005  Brummen, The Netherlands – Seven years ago on June 7, 1999, a few minutes after midnight, 19-year-old Robbert van den Broeke woke up and felt compelled to look out his second story bedroom window. Robbert opened the curtains and saw a “small, misty, pinkish-purple light” shaped like a football coming over the wheat field at a height of about ten feet. The light stopped about 150 feet from his house. “Then the light started to elongate, spreading out becoming thinner and thinner looking like a disc. When it was about thirty feet in diameter, Robbert saw what he called “electrical discharges” emit from the bottom of the pinkish-purple light. After that, the light faded away. Robbert ran outside into the wheat and there was a 30-foot-diameter circle next to a 10-foot-diameter circle.

Every year since then, more circles and other patterns have appeared near the Van den Broeke house. Now in the early morning of April 6, 2005, Robbert found two more. He called up a local television station which announced the discovery to the Dutch public. One of the listeners was Robert Boerman, founder of the Ptah Foundation and producer of the Dutch Crop Circle Archive. Robert called Peter van Learhoven who went to Hoeven a little after twilight on April 6, and took photographs before people had walked through them. 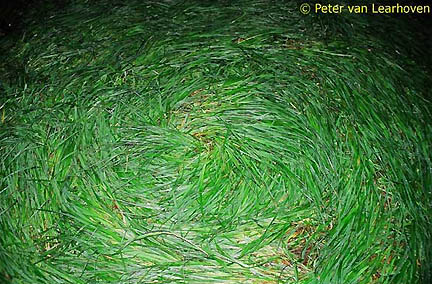 Robert Boerman, Founder and Chairman, Ptah Foundation and Producer, Dutch Crop Circle Archive, Brummen, The Netherlands (East Holland) : “Peter van Learhoven discovered that his analog camera was malfunctioning in the circles. He could not take the photos as he wanted. Normally, he has no problem with the camera. But this time it was very difficult to take photos.

We went Sunday, April 10, four days later. We did not have any problems with equipment, cameras functioned.

WHERE ARE THESE TWO NEW CIRCLES COMPARED TO THE LOCATION OF PREVIOUS ONES IN THE HOEVEN FIELD?

This formation is almost in the same area as the last ones in previous years that have appeared in Hoeven. These are only about 200 meters (656 feet) away from last year’s location. So, it’s all in the same area.

WHAT DID YOU USE TO FIND THE ENERGY FLOW?

Strange thing on Sunday was that one of our crop circle research colleagues, Netti, while she was standing in the center of the large circle, she became very warm. Ten minutes later, about five or six young guys arrived and were talking to us. One of them was also standing in the large circle in the center and he said, ‘My feet are getting warmer.’ So that was very strange.” 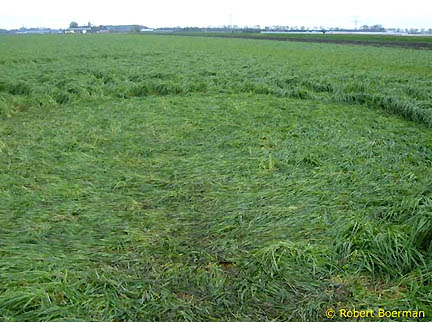 See other Earthfiles reports about crop formations in Hoeven, Holland