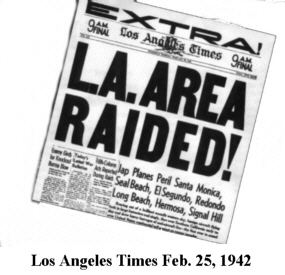 April 14, 2005  Los Angeles, California – Sixty three years ago on February 24-25, 1942, all of southern California from the San Joaquin Valley to the Mexico border was blacked out. Fearing a WWII Japanese invasion attack after Pearl Harbor on December 7, 1941, air raid sirens had gone on and off the evening of February 24, as intermittent unidentified aerial lights were reported. Then at 2:25 a.m. on February 25, most of the greater Los Angeles region’s three million population was awakened by loud air raid sirens that kept wailing for the next thirty-eight minutes. Powerful searchlights were aimed at a glowing unidentified aerial object over the Santa Monica Mountains that was shaped like a “lozenge.” Then America’s 37th Coast Artillery Brigade fired off 1,430 anti-aircraft shells at the unidentified aerial, diamond-shaped craft.

C. Scott Littleton was an 8-year-old eyewitness. In 2003, as Professor of Anthropology Emeritus at Occidental College, Mr. Littleton wrote about what he recalled:

Prof. Scott Littleton: “I was an eyewitness to the events of that unforgettable February morning in February 25 of 1942. I was eight-years-old at the time, and my parents lived at 2500 Strand in Hermosa Beach, right on the beach. We thus had a grandstand seat. While my father went about his air-raid warden duties, my late mother and I watched the glowing object, which was caught in the glare of searchlights from both Palos Verdes and Malibu/Pacific/Palisades and surrounded by the puffs of ineffectual anti-aircraft fire, as it slowly flew across the ocean from northwest to southeast. It headed inland over Redondo Beach a couple of miles to the south of our vantage point, and eventually disappeared over the eastern end of the Palos Verdes Hills, what’s today called Rancho Palos Verdes. The whole incident lasted, at least from our perspective, about half an hour, although we didn’t time it. Like other kids in the neighborhood, I spent the next morning picking up pieces of shrapnel on the beach. Indeed, it’s a wonder more people weren’t injured by the stuff, as we were far from the only folks standing outside watching the action. [Editor’s Note: Six people died during the event from injury and heart attacks.]

“In any case, I don’t recall seeing any truly discernible configuration – just a small, glowing, slight lozenge-shaped blob of light – a single blob. We only saw one object, not several as some witnesses later reported. At the time, we were convinced that it was a ‘Jap’ reconnaissance plane, and that L. A. might be due for a major air-raid in the near future. Remember, this was less than three months after Pearl Harbor.

“So, yes, I’m pretty sure it was a UFO. However, what might at first glance be taken for a ‘bubble’ similar to those often reported atop disk-shaped UFOs is, I strongly suspect, simply an anti-aircraft burst that occurred a second or so before the picture was snapped. Also, as I think about it, the searchlight beams we saw simply converged on the object and did not extend beyond it, although after sixty-one years, I can’t be certain. And the fuzzy lozenge shape I remember seeing does jibe with the much closer image in the photograph. By the way, did he (Calvert) use a telescopic lens? I strongly suspect he did, as they were available in the early 1940s, though not for Speed Graphics, which would mean that he used his private camera, perhaps a Leica.

In this connection, I’m willing to be that at least one other person had the presence of mind to photograph the object during t hour r so t was visible from Santa Monica to Orange County. Indeed, one or more pictures of it might still be lurking in local family albums. Maybe we should put out a call on the internet asking for folks in Southern California to search their family albums and snapshot collections from that era.”

In Earthfiles Archive, see other reports about unidentified aerial craft: