September 2, 2005  Wiltshire, England – Between August 9 and 13, 2005, four patterns emerged in the British crop fields which provoked many people in both hemispheres to link at least two of them to the Mayan: Wayland’s Smithy (August 9, 2005) and Woolstone (August 13, 2005). Both are in the upper right corner of the map below, not far from the Uffington White Horse.

The Wayland’s Smithy long barrow lies in a plantation of trees on the famous Ridgeway, not far from the Uffington White Horse and Uffington Castle. Excavations in the 1960s revealed the barrow was constructed in two phases. There is a wooden mortuary enclosure with stone floor that was later covered by a trapezoidal mound of chalk. Inside there are three chambers, one main one and two to the sides.

Crop circle photographer and investigator, Lucy Pringle reported: “The magnificent barrow is approximately due south of the formation. The formation therefore is really in a very remote area and a long way into the field. In fact it is on the crest of the hill looking beyond to Swindon.” 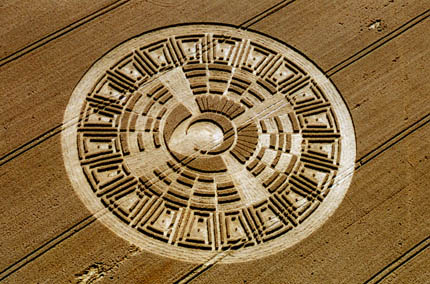 An Australian scientist, who requests anonymity, studied the Wayland’s Smithy and Woolstone crop formations and wrote the following summary:

“The appearance of a new and spectacular crop picture at Woolstone Hill, close in time and space to Wayland’s Smithy, suggests that both pictures may have similar meaning, and may be decoded in similar ways.

I already decoded the Wayland’s Smithy picture with great effort, due to its high mathematical complexity. It is a successor to the Silbury Mayan finale of 2004, except now with dates provided in more accurate binary-hexadecimal format.

In late March 2004, exactly 1 / 6 of that final 52-year time-period was left, hence the crop drawing: a final “box” symbolic of 52 years was subdivided with 6 small fine lines, while a central “clock hand” pointed at the last 1 / 6 line before the end of our current Mayan century.

Now the Wayland’s Smithy 2005 formation also chose as its basic time unit, “one Mayan century” or 52 years, extending from late 1960 to late 2012. And it showed a central crescent Sun to indicate that only 15% is remaining (a bit less than last year). More importantly, it showed two calendar dates in modern computer format, namely binary-hexadecimal or base-16. One of these was “13-10-7”, while the other was “14-5-11”.

One is our “current date”, while the other is a “near future date” of mid-August 2007, when presumably something very important will happen: another earthquake?

Those dates were both coded in “binary-hexadecimal”. Hence the new picture was made by someone conversant with the Mayan calendar, and also with computer coding systems.

Both pictures appeared in the fields in early August. This implies that they were both designed before they were made. Now onto the math.

Thus last year’s finale said: “there are only 8.67 years remaining until the End of the Fourth Sun in late 2012”.

It also set a “current date” precisely for any crop season in “late March”, probably when many of these patterns were designed, but somewhat before they appeared.

Since that coding is redundant, one may reasonably conclude that actual calendar dates might be composed of just three digits as “13-10-7” or “14-5-11” in binary-hexadecimal, and as fractional parts of our current Mayan century.

Pretty close! Maybe there is some little factor, which we have not yet taken into account?
The accuracy of that “last digit” for binary-hexadecimal (“7” in “13-10-7”) is 4 days.

At the start of our current Mayan century in late 1960, all of the binary bits would go to zero, and the crop field would appear entirely blank as “0-0-0”.

While at the end of our current Mayan century in late 2012, all of the binary bits would go to one, and the crop field would show solid bars everywhere (5 x 4 within any quadrant) as “15-15-15″.

Indeed, the “central Sun” of that crop drawing is also drawn as a 15% crescent, indicating visually that “our current Mayan century is now 85% complete“.

Finally we reach the real heart of the message, which is the other coded calendar date of “14-5-11”.

With an error of plus or minus 13 days (see above), perhaps due to some small factor we have thus far overlooked.

The new 2005 Mayan finale at Wayland Smithy uses ‘binary-hexadecimal’ to code for two different calendar dates in terms of our current, 52-year “Mayan century”. One is the ‘current date’ for this crop season of late March 2005; while the other is mid-August 2007, when presumably something very important will happen.

Many other features of that remarkable pattern:

20 boxes on the perimeter, divided into eight line segments each;
two broad arrows which tell how to read the binary code left-to-right;
2 x 8 fine lines which tell to read in base-16;
five rows of four bits within any quadrant, as a standard way of defining hexadecimal;
redundant coding as row 1 = 5 and row 2 = 4, leaving only 3 hexadecimal digits per date, even through Mayan Long Count uses five (“almost Long Count but not quite”);
‘15% crescent Sun’ at the very center, telling that only 15% of the current Mayan century now remains;
(could someone try to calculate that 15% more accurately from a better photograph?)
and a match of the “current date” for this year’s crop season, versus the ‘current date’ in 2004 by adding precisely 1.000 year.

The new Woolstone Hill 2005 drawing, laid out next to Wayland’s Smithy in a neighboring field, shows a central six-pointed star surrounded by 16 boxes, each containing 8 line segments of varying length.

In the context of Wayland’s Smithy, we can imagine that the central six-pointed star represents our own Fourth Sun which is about to end (cf. 1997 drawing of a similar kind, saying “26 x 30 weeks left until 2012”). Then its surrounding 16 “boxes” would represent the 16 hexadecimal parts of our 52-year Mayan century, beginning in late 1960 and ending in late 2012, each lasting for 3.25 years.

“In summary, all three crop patterns (2004 Silbury Hill; Wayland’s Smithy; Woolstone Hill) are some of the most intricate ever created and seem to focus on the near-future dates of mid-August 2007, after mid-summer 2009, and late 2012 (December 22, 2012 ends Mayan Grand Calendar) as a significant time indeed. According to Mayan legend, it will be the time of a great worldwide earthquake, also prophesied in other ancient cultures including Judaism, Christianity or the Muslim faith.

The last predicted Mayan date, supposedly a great flood in 3114 B.C., was recently evidenced by ice cores on Kilimanjaro, and quick-frozen animals or plants worldwide (Europe, Siberia or Peru).

The crop artists have further warned us of two other dates preceding 2012: namely mid-August 2007; and all times after mid-summer 2009. One might guess that those could feature precursor earthquakes, similar to Sumatra of December 2004?

How could any advanced intelligence know about earthquakes far in advance? Well, there is a somewhat heretical theory in astronomy known as the “galactic superwave theory”, which argues that our Milky Way (like other spiral galaxies) may periodically emit x-rays or gravity waves from its black-hole center (quantum emissions from a binary black hole) once every 5120 years.

Therefore, if a ‘galactic superwave’ is really headed for Earth from the galactic center, at close to light speed c, then advanced intelligences from elsewhere could only know about it, if they can travel faster than light speed c themselves!

Just like a man in a speedboat, who sees a tsunami headed for some tropical island: he goes there as fast as he can to warn the natives, but they refuse to listen! And they probably would kill him if he stepped ashore to talk in person.

‘Much pain but still time.’ They seem to be doing everything they can to talk to us: even making a copy of Carl Sagan’s message, and sending it back to us! Maybe they did at first send radio signals to the SETI program, but such messages were censored? So now they are making crop pictures instead?” 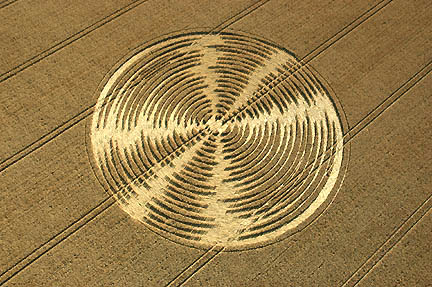 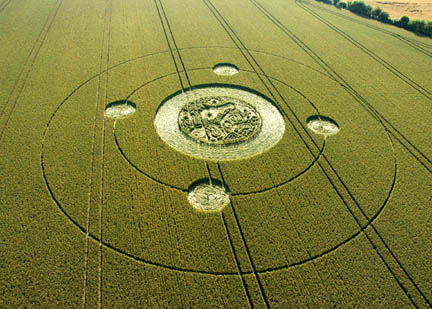 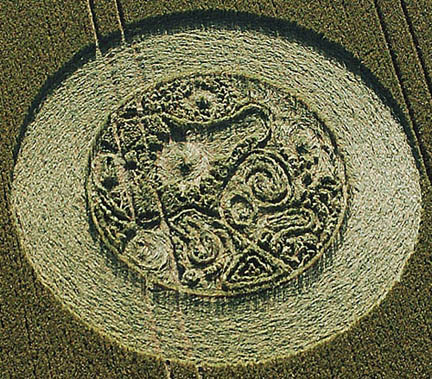 See other Earthfiles reports about mysterious lights and crop formations in Earthfiles Archives.