“Three different witnesses described seeing brilliant fire engine red – ‘brighter than fireworks’ – balls of light, larger than any stars or planets, but smaller than the full moon. The bright red lights appeared in the sky in the area of the two circles.” 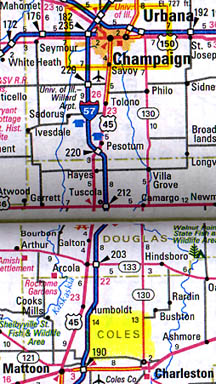 The fifth formation was discovered on August 21, in Coles County, Illinois. There were two circles in cattle corn that were discovered by the son of the landowner while he was cutting grass in an adjacent drainage area. Both circles exhibited a radial lay pattern. They were not swirled down. They were flattened from the center toward the edge.

SORT OF LOOKING LIKE A HUMAN EYE, RADIATING FROM A CENTER POINT IN LINES RADIATING OUTWARD.

Yes, although the large circle does have a very slight clockwise spin to it.

It also has an outer band of stalks about 4 feet wide that alternated being flattened clockwise and counterclockwise. Sometimes those areas would overlap. Sometimes they were diametrically opposed. It appears that the diametrically opposed sections are at both the north and south points. The overlapping areas are at the east and west points. the north part of the circle is slightly flattened out, so it’s not really a perfect circle.

The large circle measures 74.5 feet by 78 feet, so it’s more of an elongated ellipse than a circle. The smaller circle is also a slight ellipse being 22 feet 10 inches by 20 feet 10 inches. That also had a radial lay. That circle also had just a couple of stalks on the outer edge that were swirled down, literally like four stalks out of the entire formation were swirled. The rest of it was flattened from the center.

WHAT ABOUT THE NODES THAT YOU EXAMINED?

We did not see widespread node damage. However, there were a couple of stalks that exhibited what appeared to be expulsion cavities. We also spent an entire day measuring nodes for doing an elongation measurement. I managed to do the numbers on three of those and they appear to be statistically elongated, by about 25%. I have to say that in the large circle, most of the stalks have already died and were dried up by the time we need the node measurements. But there were still several stalks that were still green. Those stalks appeared to have the longest node elongation from all of the plants. So of all the stalks that did not get snapped off and die instantly, the ones that still were alive and green had the longest nodes of all the stalks we examined. 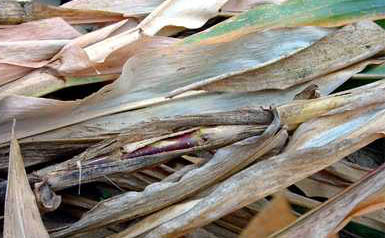 We did take soil samples. We did not find any obvious signs of elevated magnetic particles. We also did not appear to have any radiation levels of electric or magnetic fields. But I haven’t run the numbers yet to validate that.

I will say that while I was out in the field, at one point both Delsey Knoechelman and I heard a very unusual sound that we could not place. It seemed to be coming from between the two circles and it sounded like a low, mechanical humming type of sound.

COULD YOU TRY TO MIMIC IT?

Couldn’t do it for you. It’s lower than my vocal register could probably do. Now, we did not record it, but unusually Ted Robertson later on that night was filming the formation with his infrared video camera. As he panned across the main circle looking toward the small circle in the same direction in which we heard that sound, he said that he has recorded an audible interference pattern every time that he panned across that same area. So there is some sort of unusual RF interference pattern that gave him distortion on his videotape while he was taping.

WHAT ABOUT ANYONE REPORTING SEEING ANYTHING UNUSUAL IN THE SKY OR HEARING AN UNUSUAL SOUND AROUND THESE RECENT U. S. PATTERNS?

Three different witnesses described seeing brilliant fire engine red – ‘brighter than fireworks’ – balls of light, larger than any stars or planets, but smaller than the full moon. The bright red lights appeared in the sky in the area of the two circles. The appearance of the lights caused two of the witnesses to nearly drive off the road. There were two completely independent people who came to us at different times to report this same eyewitness event of seeing the red lights.

SO, THE ONLY MYSTERIOUS LIGHTS SO FAR IN AUGUST THEN WERE REPORTED WITH ILLINOIS?

As far as I know at this point.

DID THE EYEWITNESSES DESCRIBE ANYTHING UNUSUAL ABOUT THE MOTION OF THE LIGHTS IN RELATIONSHIP TO THE CROP?

One of the witnesses said they watched for some time and then a light went out. It was gone for a short time and it appeared again and it had moved to a slightly different area. Then they watched it for some time, and then the light faded down again, was gone off for a short period, and then came back on in a third location. But all three locations were generally in the same area of where the two circles were.

Ted Robertson, Harpsichord Craftsman: “It seems that the two Illinois circles in corn create diatonic ratios when compared to each other using Hawkins style methodology. Just thought I’d play round with these to see how close to being circular they are.

I did a simple Hawkins method on these and it turns out that if we take the largest circle at 75 feet and the smallest at 20 then I got a ratio of 3.75 (75/20) which is three octaves above middle C and a fifth.

This is the interval from c’ to g”‘. So its a fifth three octaves higher following Hawkins methodology.

Conversely if we took the largest circle as being the lowest note (instead of making it be the highest as Hawkins would have done in the previous calculation) then starting with the smallest circle designated as c’ then the ratio to the larger circle would sound three octaves and a fourth below. Played on a piano this would give an interval from c’ to FFF the interval is three octaves and a fifth as well.

So regardless of which circle we assign to be middle c since we have a three octaves and a fifth interval which gives a high “G” and a low “F ” , these are diatonic and not enharmonic ratios. The high G and low F both are “white notes” on the piano in the key of C.

For more about the diatonic ratio analysis of crop formations by deceased astronomer and mathematician, Gerald Hawkins, see: Glimpses of Other Realities, Vol. I-Facts & Eyewitnesses in Earthfiles Shop.

On August 28, I received a report of a very small crescent-shaped formation in corn in Belleville, Wayne County, Michigan, southwest of Detroit. The circle is about eight feet across. ICCRA member, Dr. Charles Lietzau, has made a preliminary investigation, so photos and additional details will be reported soon.”

For other Earthfiles reports about U. S. crop formations, see Earthfiles Archives: