“There have been visitors from space and they were as real as the airplanes flying overhead and they were designated by Gen. Nathan Twining (in 1947) as ‘enemy aliens.'”

December 2, 2005  Toronto, Ontario, Canada – On July 4, 1997, I was in Roswell, New Mexico, at the 50th anniversary of the most famous UFO crash discovered by rancher, “Mac” Brazel, near Corona. U. S. military and intelligence units retrieved wreckage that was soon dismissed as a weather balloon. But joining that anniversary celebration was an Army man who declared the crash was definitely extraterrestrial and was not the only one the U. S. government had covered up. United States Army Lt. Col. Philip J. Corso had just released his groundbreaking book, The Day After Roswell.  Colonel Corso wrote astonishing details about U. S. government programs to retrieve extraterrestrial technology from downed craft and to back engineer and patent it inside American corporations. On the Colonel’s list of extraterrestrial technologies were:

He also told me he had seen highly classified documents dated as early as 1951 about unusual deaths of animals around the world in which similar patterns of tissue were taken without blood, tracks, or signs of struggle. The documents identified the mutilators as “extraterrestrial biological entities.”

Then at a September 2005 UFO conference organized by Mike Bird in Canada, one speaker, with fifty years of Canadian government service, said Col. Corso was right – there are extraterrestrial entities and technologies. His name is Paul Hellyer, who was Canada’s Minister of Defence from 1963 to 1967, when Pierre Trudeau was Prime Minister. Before then, Mr. Hellyer had been an elected member of Parliament and Associate Minister of Defense. After his M.O.D. work, he was appointed Minister of Transport and Housing from 1967 to 1969, and stayed in the Parliament House until 1974.

His recent frankness was provoked by contact with an American Air Force General who said “every word in Col. Philip J. Corso’s book is true – and more.” Further, Paul Hellyer thinks the public has a right to know what governments know. Since Senators in the Canadian Parliament are appointed until age 75 and don’t have to worry about re-elections, he is urging some to organize public Parliament hearings about the UFO/ET presence.This week I asked Paul Hellyer what the U. S. Air Force General told him that was so convincing.

Paul Hellyer, former Canadian Minister of Defence in 1963-1967; Minister of Transport and Housing, 1967-1969; Member of Canadian Parliament’s House until 1974, Toronto, Ontario, Canada:  “There have been visitors from space and they were as real as the airplanes flying overhead and that they were designated by Nathan Twining as “enemy aliens” and that the United States appeared to be following a military course which would put them in the position to be able to shoot down some of these vehicles. And knowing the military, that causes me some concern because I don’t know whether they are a real threat to the United States and the world, or whether they aren’t. I think we should find out more about it and know more about it so that the public is in on the debate and not just leave it to the generals and top civil servants who think they own all this information.

THE USAF GENERAL RETIRED DID COMMENT TO YOU ABOUT LT. COL. PHILIP J. CORSO’S BOOK, THE DAY AFTER ROSWELL?

Yes, indeed. He said “every word of it is true and more.” And he did elaborate a little bit in that he said there had been face-to-face discussions.

Between the alien visitors and members of the U. S. government or armed forces or both.

DID HE EXPLAIN IF OUR GOVERNMENT STILL FELT THESE WERE ‘ENEMY ALIENS’ AS NATHAN TWINING HAD ASSIGNED THAT PHRASE TO THEM IN THE 1947 TIME PERIOD?

No. I think, if anything, He gave me the impression that maybe they weren’t that concerned, but I don’t know. I want to be careful with that one, but he did not seem to be so concerned with the potential consequences of accidental or deliberate destruction of the space vehicles as I did.

IF HE WAS NOT AS CONCERNED AS YOU WHEN YOU TALKED WITH HIM ­ WHAT? WITHIN THE LAST YEAR?

THEN, WHAT IS HIS MAJOR CONCERN?

I think he ­ I don’t know. I think he might be writing a book, too. I don’t know what his major concern is, but he certainly feels that there should be more public disclosure than there has been. Otherwise, he would not have taken the trouble to verify that what Col. Corso had said was basically correct.

THIS IS A NAME OF A UNITED STATES AIR FORCE GENERAL THAT WE WOULD ALL KNOW IF WE HEARD IT?

BUT HE HELD A CAPACITY IN WHICH HE HAD FIRSTHAND KNOWLEDGE ABOUT EXTRATERRESTRIAL BIOLOGICAL ENTITIES?

I can’t even answer that, but there was no hesitation in his voice whatsoever. It was not a question of, ‘I’ve heard rumors,’ or something like that. It was just Bang! ‘Every word is true and more.’

IF IT’S ALL TRUE, THEN IT MEANS FACE-TO-FACE ENCOUNTERS WITH EXTRATERRESTRIAL BIOLOGICAL ENTITIES, THE RETRIEVAL OF ADVANCED TECHNOLOGIES AND EFFORTS TO BACK ENGINEER THOSE TECHNOLOGIES IN THE UNITED STATES?

Yes, I would say so.

DID THE USAF RETIRED GENERAL THAT YOU TALKED WITH DESCRIBE IN ANY FORM THE TYPES OF NON-HUMANS THAT THE GOVERNMENT OF THE UNITED STATES IS DEALING WITH?

BUT HE TALKED ABOUT MORE THAN ONE TYPE?

THEY COULD STILL CONSIDER SOMETHING TO BE A THREAT?

They could. Absolutely. If there is a real threat, I think the people have a right to know about it. That would give some legitimacy to some of the American military plans.

After I made the speech here recently, I was talking to a woman who said that her son was an airline pilot and they were shadowed all the way across the country. Every time they came into contact with another radar, they would ask that they track these ‘vehicles.’ Finally when they got into Toronto and they went into a debriefing room, they were told again: ‘It did not happen. You did not see anything.’

THE SHADOWING YOU ARE REFERRING TO IS THAT THE PILOTS KNEW THAT SOMETHING THEY COULD NOT IDENTIFY AS AN AIRPLANE WAS TRAILING THEIR PLANE?

Exactly, trailing or along side.

WHY DO YOU THINK WHEN YOU WERE MINISTER OF DEFENCE IN 1963 TO 1967 THAT YOU DIDN’T SEE ANYTHING ABOUT THE UFO PHENOMENON THEN?

I don’t know. I’m very curious. I got reports of sightings, but all the reports said beside each sighting was either an explanation or no explanation.

AND WHEN YOU TRIED TO FOLLOW UP, WHAT HAPPENED?

I didn’t try to follow up. I was too busy doing other things. It wasn’t at the top of my agenda by any means.

TODAY IN 2005, LEARNING WHAT YOU ARE LEARNING, HOW WOULD YOU TRANSLATE THAT LACK OF INFORMATION BACK IN THE 1960S? WAS SOMEONE DELIBERATELY TRYING TO KEEP THE MINISTER OF DEFENCE IN CANADA OUT OF THE EXTRATERRESTRIAL/UFO LOOP?

I don’t think so, but you never know because often what they call the ‘permanent government’ does not like to share information with politicians.

IN OTHER WORDS, THOSE THAT ARE NOT ELECTED AND HAVE ACCESS TO HIGHLY CLASSIFIED INFORMATION CONSIDER THE ELECTED TO BE TRANSITORY AND NOT HAVING A NEED TO KNOW?

THAT’S MY UNDERSTANDING IN THE UNITED STATES AS WE SPEAK IN 2005.

Yeah. Is it true that Jimmy Carter tried to find out something and was told he was not cleared for it?

THAT’S MY UNDERSTANDING. IF THIS IS THE CASE IN YOUR GOVERNMENT AND OUR GOVERNMENT NOW, WHAT DO YOU THINK IT IS GOING TO TAKE TO CHANGE THE POLICY OF DENIAL IN THE INTEREST OF NATIONAL SECURITY?

It’s going to take a high public awareness that really demands to know the facts.

BUT IT’S CATCH-22. HOW DO WE GET TO HIGH AWARENESS WHEN THE GOVERNMENTS HAVE DRAWN THESE SOLID BLOCK WALLS AGAINST THE PUBLIC AND THE MEDIA KNOWING FACTS?

That’s the reason for the hearing and hope there will be another hearing, a more important one south of the border (U. S.) where there will be more witnesses that can come forward and where hopefully the mainline press would find it impossible to deny the importance of it.” 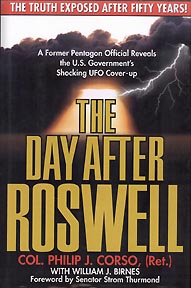 Col. Philip J. Corso (deceased in 1998) wrote in his book, The Day After Roswell:

“…buried deep inside my job at the Pentagon was a single file cabinet that I had inherited because of my intelligence background. That file held the Army’s deepest and most closely guarded secret: the Roswell files … the legacy of what happened in the hours and days after the crash when the official government cover-up was put into place. As the military tried to figure out what it was that had crashed, where it had come from, and what its inhabitants’ intentions were, a covert group was assembled under the leadership of the director of intelligence, Adm. Roscoe Hillenkoetter, to investigate the nature of the flying disks and collect all information about encounters with these phenomena while, at the same time, publicly and officially discounting the existence of all flying saucers. This operation has been going on, in one form or another, for more than fifty years amidst complete secrecy.”

For more about UFOs, please see reports below in Earthfiles Archives and the 2-volume book, Glimpses of Other Realities in the Earthfiles Shop: