“We are not looking for live microbes on this Phoenix instrument suite.
We would not detect them. What we are looking for are the organic compounds that might be the food that could create life, either in the past or some time in the future.” 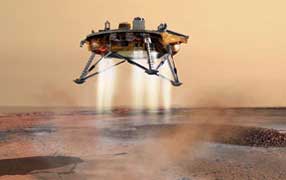 May 29, 2008  Pasadena, California -  On Sunday, May 25, 2008, at about 4:53 p.m. Pacific time, NASA and JPL’s Mars Phoenix Lander reached the North Pole of Mars with only minor glitches. First, the sleeve on its robotic arm designed to dig into the Martian permafrost wasn’t completely off, but corrected itself later on. Then the UHF radio signal from the Mars Reconnaissance Orbiter satellite suddenly and mysteriously shut off. Scientists are depending on the MRO radio to communicate with the Phoenix Lander. The radio silence, fortunately, was temporary and only delayed for a day the GO! signal to slowly start the deployment of the Phoenix robotic explorer and its digging arm. In a press conference on Tuesday, May 27th, Phoenix mission officials showed a Mars Reconnaissance Orbiter photograph of the Phoenix hanging from its parachute as it drifted down about 12 miles in front of a North Pole Crater.