“It just sat there. That blue-red, big, object didn’t go anywhere. It just sat in one spot. I think you could have put a crosshair on it and that big light never would have moved.” 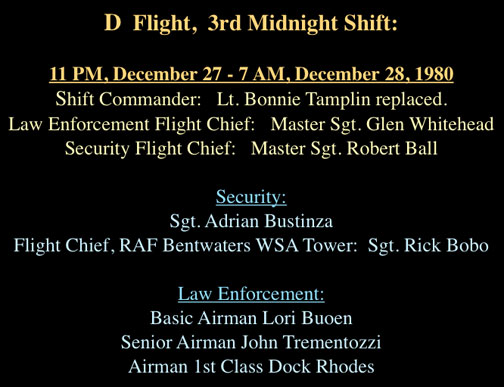 April 30, 2010  Albuquerque, New Mexico:  The RAF Bentwaters Weapons Storage Area (WSA) had nuclear weapons in December 1980 – a TOP SECRET at the time. Those nuke bunkers were watched around the clock by security from the WSA Alarm Station Watch Tower. The Delta Flight Security Chief in the Bentwaters tower the night of December 27- 28 was Sergeant Rick Bobo. The tower was fifty feet above the ground to give a clear, 360-degree view. Sgt. Bobo's priority was to report any threat to the WSA. That night, he watched a large, reddish-blue light in the sky that hovered stationary for nearly two hours and also emitted a smaller light that sped rapidly down into Rendlesham Forest. At least twice, Sgt. Bobo phoned Central Security Control (CSC) and in each call, he was told the situation was under control because there was an investigation in the forest. Apparently that was the same night that RAF Bentwaters Deputy Base Commander Lt. Col. Charles Halt investigated lights and beam phenomena in Rendlesham Forest.