“There were no hairs inside the cut circle and there were no cuts
on the red muscle meat inside that circle - not one drop of blood anywhere.”

“The cats clearly had been sliced in half at the middle of their torsos.
Both bloodless cuts were in the same place - literally
there were two back halves of cats left.” 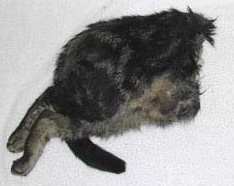 Updated August 27, 2011:  Oklahoma City, Oklahoma  - The U. S. Humane Society on August 18, 2011, announced a $2,500 reward for information about a cat mutilation in Oklahoma County. The cat's back legs were cut off in Choctaw, Oklahoma, on Monday, August 15, 2011, similar to other cat mutilations reported below. News9-TV: “Society officials say money will be given to anyone with information that leads to the identification, arrest and conviction of the person or persons who cut off the animal's back legs. According to the sheriff's office, residents of a mobile home park called police after discovering the animal. The cat was taken to the Central Oklahoma Humane Society for treatment and remains there under the care of a veterinarian.”