“Sunspot magnetic fields are dropping by about 50 gauss per year. If we extrapolate this trend into the future, sunspots could completely vanish around the year 2015.”

“I can't help but wonder what could possibly come next since we are still over a year away from the forecasted Solar Maximum (in mid-2013)?” 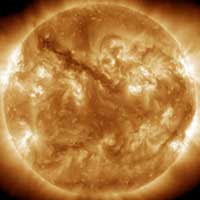 “It's still growing. The size is what blows me away.”

Sunspot 1339 has a Beta-Gamma Delta magnetic configuration and could produce further M-Class flares. Two new sunspots rotated into view Saturday on the eastern limb and were assigned the numbers 1341 and 1342. A third sunspot rotated into view Sunday morning and was numbered 1343. Sunspot 1338 recently released two small C-Flares.

Spaceweather.com reports that “many observers, especially in the deep south, commented on the pure red color of the lights they saw. These rare all-red auroras sometimes appear at low latitudes during intense geomagnetic storms. They occur some 186 to 311 miles (300 to 500 km) above Earth's surface and are not yet fully understood.”   See DMSP and Spaceweather.com.

“The sky was brightly illuminated by auroras this evening in Norway.
The photo with yellow sky was taken at 19:20 UT right after the most extreme compression of the magnetosphere.”

Updated November 22 / Original October 30, 2011 Huntsville, Alabama - The third week of October 2011, solar physicists gathered in Sunspot, New Mexico, for the first in a series of three workshops to try to figure out what is happening in our sun. After nearly three years without sunspots leading into current Solar Cycle 24, physicists wonder if the sun is doing something differently, perhaps winding down into what is called a Grand Minimum where for decades the sun would not have sunspots.