“Recent versions of the inflationary scenario describe the universe as a self-generating fractal that sprouts other inflationary universes.”

“The Chillicothe corn pattern could be a two-dimensional representation of a Heptagonal Hyperbolic Planar Tessellation ... this fractal tessellation grid might be the underpinnings  of the structure of the universe.” 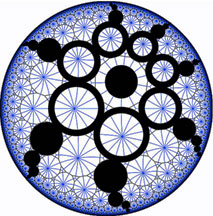 October 30, 2012  Chillicothe, Ohio - Swiss psychiatrist Carl Jung said that number concepts were probably the most primitive element of order in the human mind. The Pythagoreans believed that all things are numbers and their constituents are components of all things. Over the centuries, some numbers were set higher than others. Thus, the numbers 3, 4, 5, 7, 10, 12, 40, 70 and 100 were considered sacred by many ancient peoples. In the Hindu Vedas, the numbers 3, 7, 21, 55, 77 and 99 are regarded as sacred. The Persians worshiped 3 and 7.