– “We thought some nut was out here, you know, with explosives.
It sounded like thunder. You could feel the ground shake,
but it was nothing like an earthquake.”

– “I want you to understand that we hear and feel these quakes
almost every day, a lot more than the local news reports. ...We hear
booms all the time and the 4.4 or 4.1 magnitude in the Guthrie/Langston
area, on February 8, 2014, flickered the lights, sounded like a big explosion on our roof and knocked clocks, and other items off the wall and window sills.”

– “Felt like bombs going off. It's just a huge loud noise and then
it's like a reverb from that boom that just shakes the entire house.
If I'm experiencing eight of these in one day, then when does
it erupt and become absolutely horrible that takes my house down?”

– “A serious earthquake in the New Madrid Seismic Zone
could result in the highest economic losses due to a natural
disaster in the United States with widespread and catastrophic
damage across Alabama, Arkansas, Illinois, Indiana,
Kentucky, Mississippi, Missouri, and particularly Tennessee.” 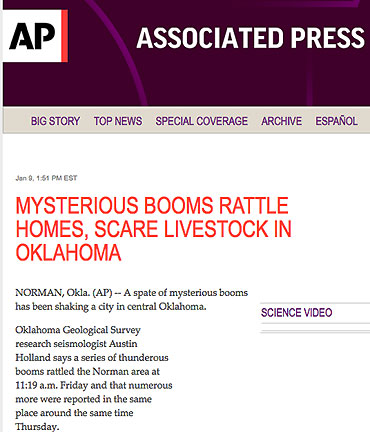 January 9, 2015, Associated Press about mysterious booms shaking
Norman, Oklahoma, at 11:19 AM both on Jan. 9th and Jan. 8th.
Not earthquakes and causes still unknown.