“It looks to me like Cycle 25 is going to be not much bigger and probably smaller than Cycle 24. But I don't think anyone on the planet really knows.” 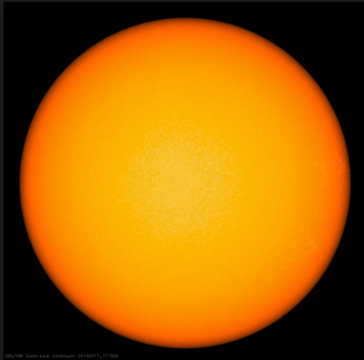 July 17, 2014, the sun facing Earth had no sunspots.
Will Solar Cycle 25 be normal? Or is our Sun headed for a no sunspot
Grand Minimum? Image by Solar Dynamics Observatory (SDO).

September 2, 2015 - NASA Ames, Moffett Field, California- On July 9, 2015, at a National Astronomy Meeting in the U. K.'s Llandudno, Wales, solar physicist Valentina Zharkova and colleagues from the U. K.'s Northumbria University, presented a computer model of solar activity projected some fifteen years into the future to the 2030s. Prof. Zharkova reported, “We found magnetic wave components appearing in pairs, originating in two different layers in the Sun’s interior. They both have a frequency of approximately 11 years, although this frequency is slightly different, and they are offset in time. Over the cycle, the waves fluctuate between the northern and southern hemispheres of the Sun. Combining both waves together and comparing to real data for the current solar cycle, we found that our predictions showed an accuracy of 97%,” said Zharkova.