“The FRB intense energy bursts are not a cataclysmic event, it’s not a one-time event, and that makes them quite unusual. They might be artificial in origin.”

June 20, 2020  Manchester, England  – One of the biggest mysteries about our universe right now in June 2020, is the Fast Radio Bursts phenomenon, also known as FRBs. More than 100 have been recorded by astrophysicists since 2007 and some keep repeating, showing that whatever causes the enormous energy releases is not destroying the sources.

The most astonishing data has come recently in a report by the University of Manchester in England. It’s known as FRB 121102, which stands for November 2, 2012, the day it was first discovered. FRB 121102 has a precise 157-day cyclic repeating pattern. No one knows why, or what is producing the intense energy in such a precise cycle. Avi Loeb, Ph.D., Chairman of the Harvard Astronomy Department emphasizes that “the FRB intense energy bursts are not a cataclysmic event, it’s not a one-time event, and that makes them quite unusual. They might be artificial in origin.”

Even Prof. Loeb, in the past three years, has speculated publicly that there could be very advanced alien technologies in our cosmos. He told me in March 2017 that he thinks it’s possible that the mysterious Fast Radio Bursts that have made periodic headlines since 2007 could be from advanced technologies of “artificial origin.”

The mysterious FRBs were first discovered in previously recorded data taken by the Parkes Radio Dish in Australia in July 2001. But because of workloads, those records were not seen by staff there until 2007.

What researchers found in the Australian archived radio data was evidence of a few extremely powerful and mysterious radio pulses that no one had seen before and no one knew what they were.

Now thirteen years later, with more than 100 Fast Radio Bursts recorded, we know FRBs come from all over the sky and are not concentrated on the plane of the Milky Way. Many have radio frequencies detected around 1400 MHz; a few have been detected at lower frequencies in the range of 400–800 MHz. The famous first repeating radio pulse, FRB 121102, was received at the Arecibo Observatory in Puerto Rico on November 2, 2012. Its power greatly exceeded the maximum thought possible for what is called the “galactic anticenter” of the Milky Way. That is a direction in space directly opposite of the Galactic Center, as viewed from Earth. From our perspective, that is in the constellation Auriga below.

FRB 121102’s astonishing power was 500 million times the power of our Sun — and lasted for only about 1 millisecond — that is one-thousandth of a second. Or put another way: that Fast Radio Burst released as much energy in 1 millisecond as our Earth’s sun releases in nearly a hundred years! Illustration by Project Breakthrough.

Visible-light image of the host dwarf galaxy circled in red in the blown up inset below is the source of repeating fast radio bursts since November 2, 2012. That dim dwarf galaxy is 2.5 billion light-years from Earth in the Auriga Constellation.

The VLB1 Network helps to amplify radio source signals coming from light-years away because the network collects the radio source at several radio telescopes on Earth that are linked to the 305-meter William E. Gordon Telescope at the Arecibo Observatory in Puerto Rico. Scientists were initially shocked when FRBs, beginning with FRB 121102, repeated from the same place over time. 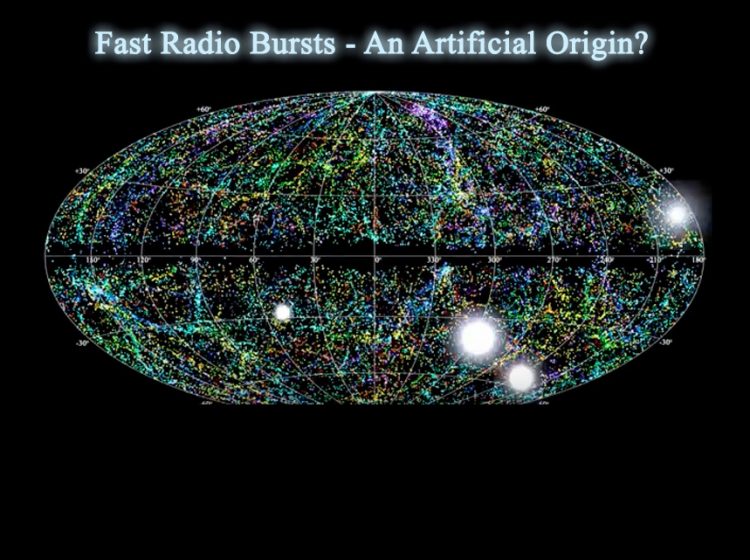 Further, more than one hundred FRBs have been officially recorded from different parts and distances of our universe. Even the Chairman of the Harvard University Astronomy Department, Avi Loeb, Ph.D., told me in a March 2017 interview for Earthfiles.com that it was possible that the intense energy bursts could be related to “advanced speed-of-light transportation systems of artificial origin.”

“These fast radio bursts have very extreme properties. They’re extremely bright, much more so than any other source we know. They’re very brief, just a thousandth of a second. They have emission that is concentrated around a preferred frequency, while for example, pulsars associated with neutron stars, they have a very broad range of frequencies at which they emit. And moreover, these fast radio bursts, at least one of them keeps repeating in an irregular fashion. It’s not repeating periodically like pulsars do. There are some months where there’s no repetition, and then over a single day there are ten repetitions. So this irregularity in the repetition, and the fact that it’s not a cataclysmic event, it’s not a one-time event, makes them quite unusual. They might be artificial in origin.

“… if we find emission at other wavebands, not just in the radio, that could provide us with more clues about the nature of the source, or if we get more data in the radio, and we find some peculiar patterns in the frequencies that are being used, for example. The more peculiarities we find, the more it will drive the discussion in the direction of an artificial origin.”

Scientists were initially shocked when FRBs repeated from the same place over time. Further, more than one hundred FRBs have been officially recorded from different parts and distances of our universe. Even the Chairman of the Harvard University Astronomy Department, Avi Loeb, Ph.D., told me in a March 2017 interview for Earthfiles.com that it was possible that the intense energy bursts could be related to advanced speed-of-light transportation systems of  “artificial origin.”

What’s important is that FRB 121102 was not a one-time event. Additional bursts were found from the same sky position with the same pulse dispersion measure. That meant FRB 121102 was a repeating source and that meant it survived that huge energy release.

Now comes the latest puzzling development in Fast Radio Bursts as summed up in this June 8, 2020 Popular Mechanics headline: “This Creepy Cosmic Radio Burst Repeats Every 157 Days. Where Is It, (all the energy) Coming From?” The “Creepy Cosmic Radio Burst” refers to the recent discovery of a precise and so far endlessly repeating 157-day-cycle in the now-famous 121102 FRB.

That baffling new information was first published in the July 2020 issue of the U. K.’s Monthly Notices of the Royal Astronomical Society. The Jodrell Bank Observatory at Manchester University reports that the Manchester scientists discovered each radio burst from FRB 121102 lasted approximately 90 days, depicted by the turquoise energy lines below between the outer orbit and the Earth radio receiving dish. Next is silence for 67 days. After the silence comes more Fast Radio Bursts for 90 days. Then silence —  on and on. No one knows how or why such enormous bursts of radio energy would be emitted in a precise, cyclic and repeating pattern.

The head of Harvard’s Astronomy Department, Prof. Avi Loeb, is also Chairman of the Breakthrough Starshot Advisory Committee where he and other colleagues speculate that FRBs could be “advanced transportation systems of artificial origin” that can travel at or near the speed of light.

Other scientists think Fast Radio Bursts could come from magnetars — fast-rotating, ultra-magnetized neutron stars that have extremely powerful magnetic fields that can decay and emit FRB-type energy. But so far, no one has come up with a neutron source linked to a Fast Radio Burst.