“IT’S GONE! Almost as quickly as it appeared it has now disappeared (Friday night).”

— Instagram by Utah Dept. of Public Safety about unexplained removal of monolith on Friday night, November 27, 2020.

“I decided to go there first because I was drawn to the fact that this object (silver monolith) had been there for five years, hidden in nature.”

— David Surber, 33-year-old former U. S. Army infantry officer, who traveled six  hours thru midnight November 26-27, 2020, to be first to find it after UtahDPS

“Inquiring minds want to know what the heck is it?”

UPDATE:  Sunday, November 29, 2020  Albuquerque, New Mexico – Utah officials at the Department of Public Safety announced by Instagram this weekend that on Friday night, November 27, 2020, the 12-foot high metal monolith was removed as mysteriously as it was first discovered at a red rocks site south of Moab.

Lt. Nick Street, a Dept. of Public Safety spokesman, told today’s NYT that UtahDPS officers were puzzled about how the monolith had been erected in the first place as far back as October 2016 (see Google Earth search image comparison results below). Street said the metal monolith had been firmly embedded into the solid red rock.

“Somebody took the time to use some type of concrete-cutting tool or something to really dig down, almost in the exact shape of the object, and embed it really well. It’s odd. There are roads close by, but to haul the materials to cut the rock, and haul the metal, which is taller than 12 feet in sections — to do all that in that remote spot is definitely interesting.”

UPDATE:  November 27, 2020  Albuquerque, New Mexico – In the past 24 hours, a Reddit post appeared with latitude/longitude information of the exact location of the tall, silver monolith that was recently found by Utah state wildlife and public safety officers on November 18, 2020, when they were counting bighorn sheep in the rugged, reddish rocks of southern Utah.  The Reddit user, Tim Slane, who posted the coordinates, said he found them by tracking the UtahDPS helicopter until it went off radar. Slane concluded the helicopter had landed and posted the location at Reddit.

Now, a 33-year-old former U. S. Army infantry officer, who saw the new Reddit location information, also found aerial map comparisons of the lat/long one year apart from August 2015 when there was NO monolith — to October 2016 when there WAS the monolith.

This means that the artist some insisted was the answer, John Harvey McCracken, could not be responsible because he died on April 8, 2011, five years before the October 2016 photo, which allegedly is the first factual evidence of the silver monolith’s appearance at the southern Utah site.

Yahoo! News interviewed David Surber by phone, who said:  “I decided to go there first because I was drawn to the fact that this object (silver monolith) had been there for five years, hidden in nature.”  And the true source of the tall, silver-colored monolith is still a mystery.

In the morning of Saturday, November 21, 2020, biologists and officers from the Utah Division of Wildlife Resources (UDWR)  were in a Utah Dept. of Public Safety (DPS) helicopter counting bighorn sheep from the air in southern Utah. Pilot Bret Hutchings told a KSL-TV reporter in Salt Lake City that one of the biologists yelled out to turn the helicopter because he saw what looked like a large, metallic monolith down in the wild rocks.

The crew thought of the famous 1968 science fiction film 2001: A Space Odyssey by legendary director Stanley Kubrick that centered around a large, perfectly machined monolith presumed to have been made by unseen extraterrestrial species. Throughout the film, the mysterious monolith shows up periodically in key times and places in the evolution of Homo sapiens sapiens, beginning in Africa after already-evolving primates were manipulated genetically by the unseen E. T.s to evolve into increasingly intelligent humanoids. 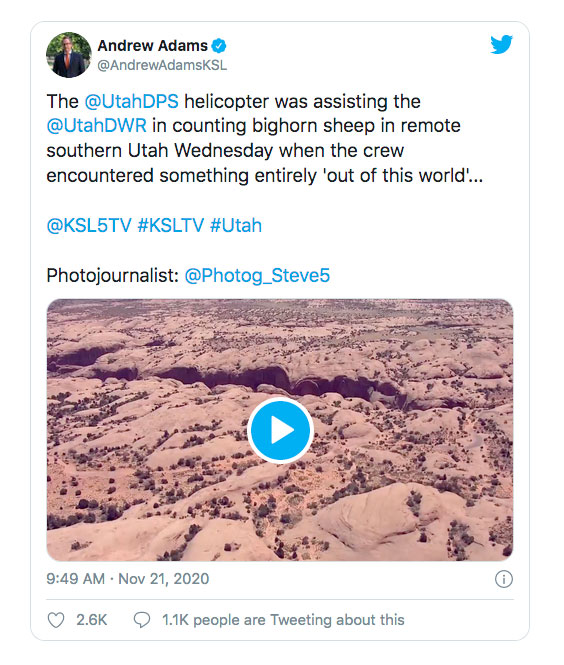 Pilot Bret Hutchings told KSL-TV he did not know if it might be a construction from NASA or someone’s work of art:  “I’d say it’s probably between 10 and 12 feet high” and made out of metal. “We were kind of joking around that if one of us suddenly disappears, then I guess the rest of us make a run for it.” Because DPS and the biologists did not want people trekking to the region where they are trying to protect the bighorn sheep, authorities are keeping the exact site secret.

DPS Aero Bureau released this Instagram image with the caption:   “Inquiring minds want to know what the heck is it?” 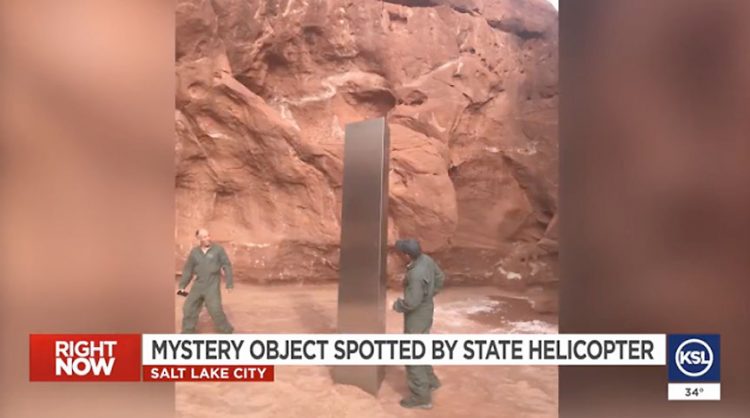 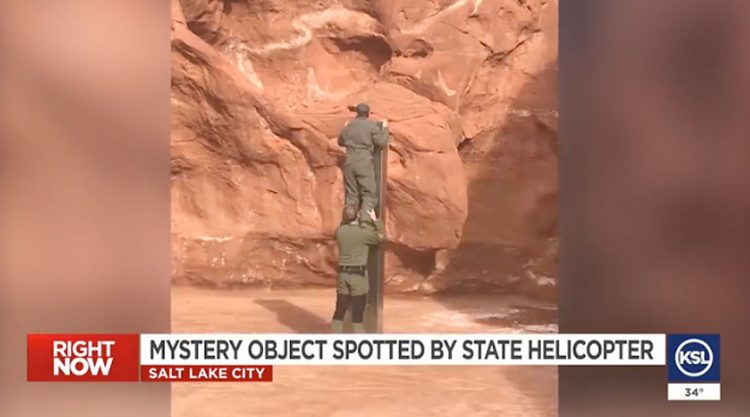 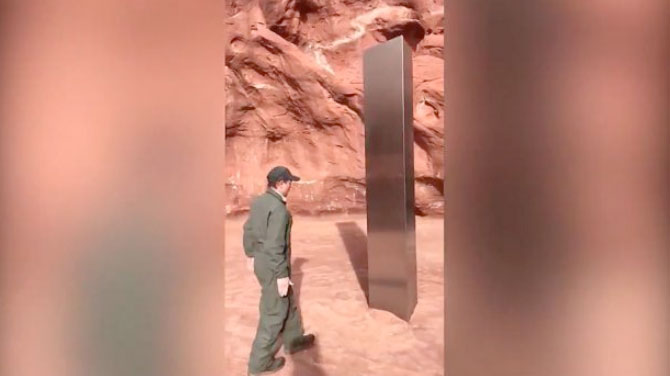 04-29-2016 – Sphinx Reported On Castner Glacier Near Black Rapids, Alaska. Any Connection to the Alleged “Dark Pyramid” Near Mt. Denali?

“Utah Monolith: Internet Sleuths Got There, But Its Origins Are Still A Mystery,” November 27, 2020, Yahoo!News:  https://news.yahoo.com/utah-monolith-internet-sleuths-got-205337670.html