“The volcano has spewed out thousands of tons of lava, destroyed hundreds of houses, forced the evacuation of nearly 6,000 people  from the island of 83,000 residents since it began erupting Sunday, September 18, 2021 … and the La Palma Airport has been closed down due to ash accumulation on runways.”

Updated: September 25, 2021 La Palma Island, Cumbre Vieja Volcano on  Spain’s Canary Islands off the west coast of Morocco. La Cumbre Vieja Volcano is in the far west of seven islands in the Canary Island chain off the west coast of Morocco in the Atlantic Ocean. Some scientists think it is possible that if the volcano collapses into the ocean, a large tsunami could sweep at least 3,234 miles to New York City or other site on the East Coast of the United States. 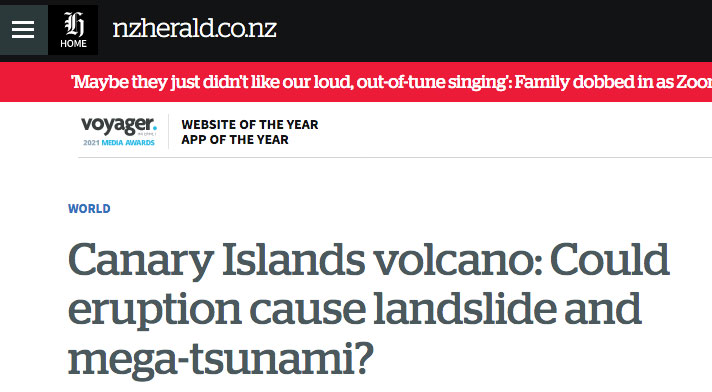 At 3:15 PM local time (1415 GMT) on Sunday, September 19, 2021, the Spanish island of La Palma erupted, spilling lava and thick smoke toward thousands of residential houses in the Cabeza de Vaca area.  By Sunday evening, Spain’s military had evacuated 5,000 residents from villages on the edge of La Cumbre Vieja national park, where several homes were destroyed by the volcano’s fire. temporary shelters have been set up and no one has been injured or killed so far.

Volcanologists have long worried that a major eruption of a Canary Island volcano such as La Palma’s Cumbre Vieja that a huge landslide into the Atlantic Ocean could set off “mega tsunamis” that could sweep across the ocean onto somewhere in the American East Coast. Some scientists think if the volcano itself collapses into the Atlantic, the result could be waves hundreds of metres high radiating out into the Atlantic.

In the hours before the lava eruption, there was a magnitude 3.8 earthquake after weeks of more than 22,000 smaller, persistent quakes. This is the first time since October 1971 — 50 years ago — that La Palma has erupted. During that 1971 volcanic eruption, the toxic gases killed a tourist who got too close and breathed in the poisonous gases in the eruption. Before then, it erupted in 1949.

Local tour guide, Jonas Perez,  told AP and Reuters that,“Now the most amazing thing, which I’ve never experienced is that the noise coming from the volcano — it sounds like twenty fighter jets taking off and it’s extremely loud. It’s amazing.”