“So yeah, it’s not an obelisk or aliens, but certainly something to check out, and hard to discern much from the image.”

December 6, 2021 Albuquerque, New Mexico – Last month in November, China’s Yutu 2 rover was exploring inside the Von Karman 115-mile-wide crater shown above. Yutu 2 has been rolling around in the crater since January 3, 2019, after China’s Chang’e 4 lunar lander came down on the moon’s far side. Now, two years later in November 2021, the photograph below of a “cube-shaped object” was taken by the rover.

Chang’e 4 scientists want to get closer to the horizon “cube” and hope between December 3 to December 6, 2021, that Yutu 2  will be close enough for identification. The China National Space Administration is calling it “mystery house.” But others speculate it could be a large rock perhaps knocked to the horizon line by a meteor impact. 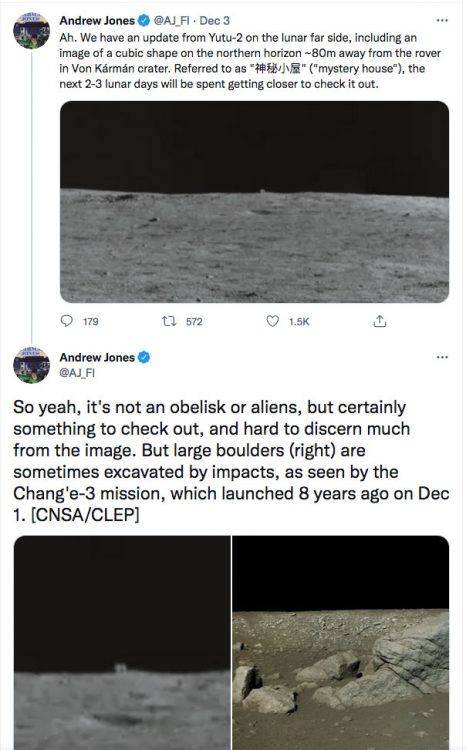 Far Side Moon Images by Chang’e-4 in January 2020:
https://www.space.com/china-moon-far-side-lander-rover-photos-14th-lunar-day.html