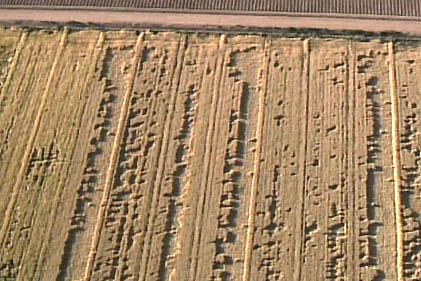 August 1, 2005 Grass Lake, Michigan – In the third week of May 2005, three long, parallel strips of wheat were reported by a Phoenix radio station to be laid down in a field near Lower Buckeye Road and 75th Avenue in the Tolleson suburb of Phoenix, Arizona. Jeffrey Wilson, Director of the Independent Crop Circle Researchers’ Association (ICCRA) in Ohio, asked Rod Bearcloud Berry to investigate which he did on May 19. Jeff e-mailed, “Bearcloud reports that there are three linear flattened pathways approximately 525 to 600 feet in length that are parallel to the power lines and the road. Interspersed between the three pathways are a series of irregular flattened shapes, none of which cross any tramlines.” [ See 052605 Earthfiles. ]

Other investigators confirmed there were three wheat fields in Tolleson similarly affected with straight, randomly downed crop. Phoenix resident, Kathy Doore, volunteered too sample the three fields for analysis by ICCRA and biophysicist W. C. Levengood of the Pinelandia Biophysical Laboratory in Grass Lake, Michigan. ICCRA and Levengood confirmed that the wheat growth nodes of the downed and standing plants inside the odd patterns were definitely elongated when compared to control plants collected from outside the randomly downed sections. W. C. Levengood also found other anomalies such as a node expulsion cavity, a deformed peduncle and magnetite particles sampled from the randomly downed soil. I talked with him last week about his formal report, which is included under More Information after interview.

W. C. Levengood, Biophysicist, Pinelandia Biophysical Laboratory, Grass Lake, Michigan: “In plants well sampled from the three Phoenix (Tolleson) fields by Phoenix resident, Kathy Doore, I started off in the usual manner by looking at the node lengths on the plants. After I collected the nodes for the lab exam, I realized that Kathy, who collected field samples and controls, did so in a manner that gave us more information than usual from the randomly downed and upright wheat plants. What she did was gather all standing and downed crop samples together within five to ten feet of each other. That allowed us to break this study of the node lengths into three categories.

3)  Control wheat taken outside the randomly downed formations for base line comparison has straight and shorter growth nodes.

The node lengths had such striking differences. I measured a lot of plant nodes. In the three groups, each group had between 50 and 85 plants that I examined. That’s very solid data. Then you do a statistical analysis on that to get the mean value and standard deviation.

After seeing that, I saw that the energy that caused this was late in the development cycle. And I wondered if it had any effect on the seeds which were probably close to development? If so, could I detect it?

That’s why I did the study of the seed growth, the vigor factor that determines development. The higher the factor, the more vigor in the seeds. But what I found was almost an inverse correlation.

1)  The downed plants in the formation had the lowest development factor of 1.47.

MEANING THAT THE SEEDS IN THE DOWNED WHEAT HAD BEEN THE MOST AFFECTED BY ENERGIES WHICH INTERFERED WITH PLANT GROWTH FROM THOSE SEEDS?

Yes, the formation seeds were affected. Visually, the seeds looked perfectly normal. But when you do this bioassay, I found their growth vigor was suppressed.

WHY IS IT IN OTHER CROP FORMATIONS, THERE HAS BEEN ACCELERATED GROWTH FROM SEEDS SAMPLED FROM INSIDE PATTERNS?

OK, the reason for that is it depends on the stage of plant development in which the energies interact – plus the complexity of the energies. Don’t forget that microwave energy is not the only thing that hits the plants. There are ion electron avalanches which can enhance the growth. So, it’s the ratio of the two ­ microwaves and ion electron avalanches. You never know what that ratio is until you do a bioassay and look at the development factor.

SO, YOU CAN EITHER END UP WITH STUNTED SEEDS OR INVIGORATED SEEDS.

Exactly. It all depends on the ratio and how the energies are made up. These are what we call ‘initial’ or ‘end point’ energies. The two primary ones that do the damage that we can actually measure easily in the lab are the microwaves and the ion electron avalanches. The microwaves generally predominate in terms of damage to seed development. In terms of accelerated growth and higher vigor, that is the ion electron avalanches which cause more subtle effects.

There is another factor that I would like to mention. I found that in addition to the elongated nodes, there were expulsion cavities in the sampled Tolleson wheat plants.

[ Editor’s Note: Expulsion cavities are holes in the cellulose fibers in the outer epidermis of the growth nodes. The tough fibers are literally pushed apart from within. That happens when there is a high pressure build up in the growth node moisture exposed to microwave energy emitted by the spinning plasma vortices hypothesized to be the creating force of crop formations. ]

IS THERE ANY ENERGY BESIDES MICROWAVE THAT COULD CAUSE THE EXPULSION CAVITIES? No, I don’t think so. The first scientific paper I wrote about this was published in the international journal for plant biology, Physiologia Plantarum.

Yet, the peduncle must become deformed much earlier on when that particular plant tissue is in its early stage of development, when the cell division is very high, and it gets hit with the spinning plasma energies. When the cell division is high, the cells are very subject to outside energy influence. But, the rest of the plant develops normally. The interesting thing is here is the seed head which you would expect to be even more deformed because it’s the germinal tissue. But the seed head developed normally above the deformed peduncle because it is not ready yet to go through the stage of maximum cell development, or mitosis.

So, what that means is the energy is extremely selective and hits fields at certain times, sometimes more than once, and whatever happens to be at a high development stage gets severely altered in its developmental pattern. This particular Tolleson crop was hit at least twice with the microwave energies during the growing season of that barley.

BECAUSE THE DISTORTED PEDUNCLE WOULD HAVE HAD TO HAVE INTERACTED WITH THE ENERGIES EARLIER BEFORE THE WHEAT WENT DOWN WHILE THE PLANT WAS STILL GROWING TO MATURITY?

Yes. This is a very interesting phenomenon.

So, the crop formation energy can meet up with a cloud of meteoritic material. Researcher Gene Thomas has also learned that foundries can produce these magnetic particles and spew the micron-sized iron particles into the air.

Gene has done some marvelous work in chasing this down and I have given him some of my samples to do a magnetic drag on. Now, instead of taking soil and doing the magnetic test drag that is dirty and time-consuming, Gene would like to make a device that can go right into the field and pick up on very localized magnetic fields from the iron particles. That’s a good idea and he could map out the whole area that way. He’s still working on designing the instrument.

Could Irrigation Water and Wind Have Caused the Elongated Growth Nodes and Stunted Seed Vigor?

Absolutely not. With irrigation, the plants do go down easier in the wind. But the reason for that is not that the plants are weaker. It’s because the irrigation causes the root systems to spread out along the surface of the soil. So, if the plants can get energy from the soil surface, it’s a conservation of energy in Nature. The plants don’t bother sending a tap root straight down into the soil because they don’t need to.

They are uprooted more easily than a plant growing in a normal season that has rains and then drought and then they have to send down a tap root to go down and get the moisture from lower depths.

BUT THE IRRIGATION AND WINDS COLD NOT CAUSE NODE EXPULSIONS OR THE EXPANSIONS IN THE LENGTHS OF THE GROWTH NODES?

SO THE MEDIA SHOWED THE PUBLIC THE THREE PHOENIX FIELDS THAT LOOKED AS IF THE PLANTS HAD BEEN LAID DOWN IN LINES AND THE FARMER SAID IT WAS IRRIGATION AND WIND. YOUR INVESTIGATION IS SAYING THAT THERE MIGHT HAVE BEEN IRRIGATION AND WIND, BUT SOME KIND OF COMPLEX ENERGY SYSTEM ALSO INTERACTED WITH THOSE FIELDS?

Why Geometric Crop Formations in England and Randomly Downed in United States?

IF THIS SAME PLASMA VORTEX WITH COMPLEX ENERGIES IS INVOLVED WITH CROP FORMATIONS AROUND THE WORLD, WHY IS IT THAT IN THE THREE ARIZONA FIELDS WE DID NOT FIND BEAUTIFUL GEOMETRIES?

I think the reason why England has the very intricate geometric formations and the crop formations here in the United States are more scruffy and appear to be more random is because crop formations is that crop formations are often associated with stormy weather. The U. S. has a high degree of turbulence in its weather, from tornadoes to hurricanes. Let’s say that the ion plasmas are coming down from the ionosphere toward the Earth and they are being pinched by the magnetic pinch effect of the Earth’s magnetic field. When they reach the crop field, if nothing disturbs them, they can make a very intricate geometric pattern.

But, if there are a lot of cross wind and all kinds of turbulence in the atmosphere, that can break the pattern up into all kinds of random shapes.

Could Vortex Energies Be Manipulated by Advanced Intelligences?

WHAT ABOUT THE SOURCE OF THE SPINNING PLASMA VORTICES? DO YOU THINK THERE’S ANY EVIDENCE OF AN ADVANCED INTELLIGENCE, PERHAPS EVEN USING NATURAL EARTH METEOROLOGICAL CONDITIONS TO MAKE SPECIFIC CROP DESIGNS?

A few years ago ­ five or six years ago ­ I would have said no. But, there have been things that have come up more recently that I have not published and I think there might be some direction to this. I can’t say for sure, but let’s say I’m weakening on my viewpoint there.

THEN IT MIGHT BE POSSIBLE THAT A NATURAL MECHANISM INVOLVING THE EARTH’S ION PLASMAS COULD BE MANIPULATED?

Yes, it might be used by some other intelligence.”

Figures 1, 2 and 3 referenced in these four pages are labeled and shown above in Earthfiles report. 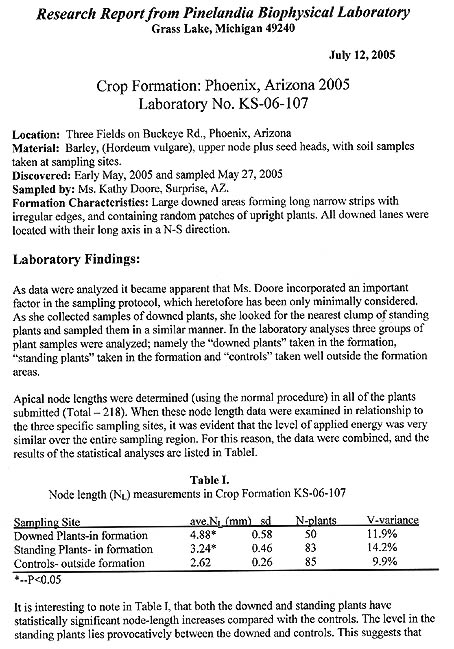 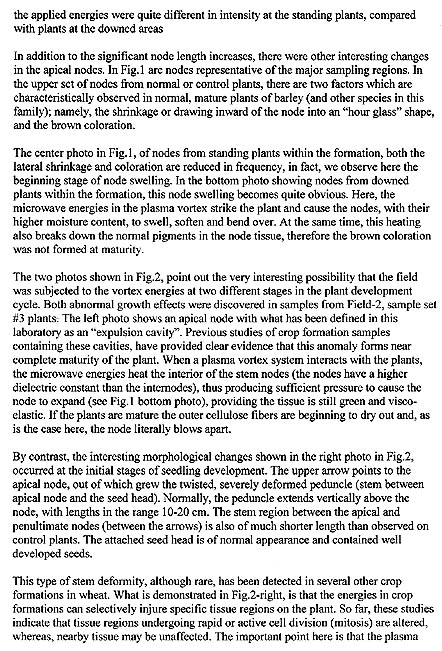 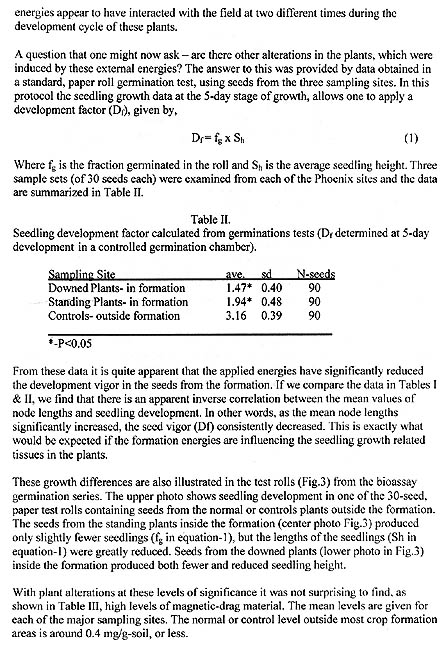 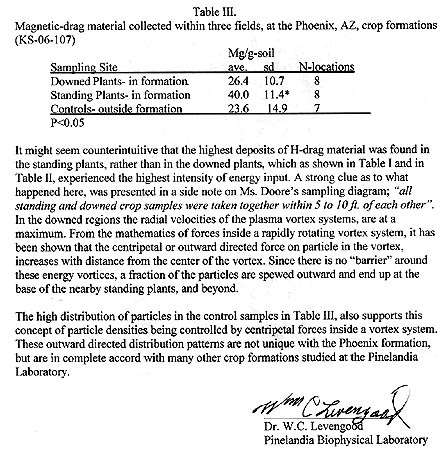 Also, see other Levengood and Earthfiles reports about crop formations in Earthfiles Archives.