November 10, 2005  – Fifty-two years ago on May 20, 1953, it’s been said by a variety of sources that some kind of unidentified aerial craft allegedly crashed in a desert site near Kingman, Arizona. Follow the red arrow in the map below from Kingman to the yellow marked location two hundred miles straight north. The yellow marks a dry lakebed east of Fishlake National Forest which the U. S. government photographed in a grid pattern on June 11, 1953.

Two dozen high altitude photographs were taken in a grid pattern of a large triangular feature in the dry lakebed near a government facility known as the Desert Research Experimental Station, or D.R.E.S. The triangle measured approximately 4,400 feet long and 2,700 feet wide. The measurements are from a 1999 geologist’s analytical report.

The location of this unusual triangle feature is 175 miles south of the highly classified Dugway Proving Grounds. At least one former United States Air Force pilot says he has firsthand knowledge that a large aerial vehicle “not from this world” impacted in 1953 where the triangle was dug to bury the craft – and perhaps to provide a permanent marker in the lakebed for unknown purposes.

The nearest small town to the lake bed is Garrison, Utah. A few miles beyond is Baker, Nevada, where at least one local resident remembers a vivid explosion of something in the direction of the lakebed around 1953.

On July 16, 2005, I’m standing inside the odd triangle feature in the lakebed. Three miles away beneath the yellow arrow is the U. S. Forest Service’s Desert Research Experimental Station, DRES.

According to U. S. government history about the site, range lands during the severe drought years of the 1930s had deteriorated, affecting survival of livestock and ranchers. No one knew how to manage desert plants, so the Desert Experimental Range was created to learn.

In 1933, the Civilian Conservation Corps, or CCC, built the DRES facility where the yellow arrow points below. 135 miles of fence was also built by the CCC to mark the boundary of DRES using hundreds of wire rolls and over 40,000 wood posts cut by hand. Most of the original posts still stand ­ a testament to the dry, high desert climate there.

By 1935, the CCC built these two stone obelisks as a gate entrance to DRES, indicated by the yellow arrow.

Two and a half decades later on October 26, 1976, the United Nations Educational Scientific and Cultural Organization formally dedicated the Desert Experimental Range as part of the “international network of biosphere reserves. This network of protected samples of the world’s major ecosystem types is devoted to conservation of nature and scientific research in the service of man. It provides a standard which the effect of man’s impact on his environment can be measured.”

Ordered by Amadon-Mahtai M’Bow, Director General of UNESCO on October 26, 1976, under the decision of the Bureau of the International Coordinating Council of the “Program On Man and the Biosphere.” Exactly why this occurred and what the legal implications are in making DRES a U. N. biosphere are still not clear.

Today in 2005 from the outside, the DRES facility looks run down with paint peeling badly on all the buildings. But a strange juxtaposition to all the peeling paint and boarded up windows are new padlocks and many new doors with brand new solid locks. [ Editor’s Note: Stan Kitchen, current manager of the DRES installation since 1999, says he has been forced to put on new doors and locks because vandals have broken into the facility. But he has no knowledge about the triangular feature in the lakebed. ]

The new doors and locks stand out as peculiar amid all the peeling paint and unkempt look of the buildings and grounds. There is also fresh weather caulking around the doors.

From behind one of the decrepit-looking DRES buildings, a new mono-directional antenna is powered by a new solar energy array constructed several hundred yards from the DRES facility. 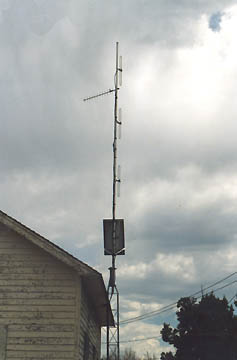