– About 1.5 miles north of 2004 four circles in straight line
that were 20 degrees east of magnetic North.

April 6, 2006  Conondale, Queensland, Australia –  On March 28, 2006, the air around Conondale, Queensland on the east Australian coast, was unusually warm and still. There were no thunderstorms or wind, yet two beautifully spiraled circles in 2.5-feet-high wild grass were found only about a mile and a half north of where four beautifully spiraled circles were discovered in a line, also on March 28th, in 2004. The year before in 2003, in the same region, residents reported oddly, but randomly, downed sorghum.

What is it about Conondale? It’s a small dairy farm community a couple hours by car northwest of Brisbane.  It’s also suspected there is a lot of underground water there. Not far away is a Crystal Waters community supplied by a river. Underground water flowing beneath the limestone of Great Britain has also been discussed as a link to why so many crop formations there. But no one knows for certain.

Whatever the reason, Something has visited Conondale at least three times to interact with the tall grasses, without leaving tracks or signs of disturbance around the circles. This year, one of the two circles is 8 meters in diameter, or about 27 feet.  The smaller is about half that size at 4 meters, or about 13 feet in diameter.

Two years ago, in 2004, the largest of those four circles in a straight line measured 7.9 meters – about the same as this year. Then  the next  size down was 4 meters at the most southern end. On the other side of the largest circle were two that measured .85 meter and 1.8 meters. Those four circles in 2004 were aligned exactly 20 degrees east of magnetic North. The two this year at the end of March 2006 was just 4 degrees east of magnetic North.

This week I talked with the photographer I interviewed in 2004 who also went to the two new circles to photograph. He is Christopher White – a gardner and handyman now living in Maleny. Last year, he photographed at night and ended up with unusual glowing orbs in some frames which he did not see with his eyes. See Earthfiles 040704 and Earthfiles 041404. 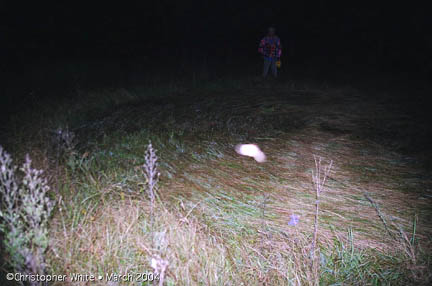 Christopher White, Photographer, Gardner and Handyman, Maleny, Queensland, Australia: “The grasses seemed to be laid down in a very similar manner, giving this lovely sort of lumpy rippled effect all the way around the perimeter especially. The cones (centers raised) were possibly a little more raised and a little more swirled this time than 2004. These central crowns were raised a good 6 inches or more above the swirled grasses surrounding and off center by a noticeable, though small, margin of some 4 inches. They weren’t so pointed from before by memory. Both of the two circles this time had very similar cone centers.

The largest circle had a (center) cone at least a meter wide. They were all laid clockwise. The smaller circle – I think it was about 4.2 meters. It had some lovely short bits of green grass left vertically in the center with a slight twist to them which was actually kind of pretty.

I know that one of the friends we had took a pendulum in there which swung quite wildly east and west, although the circles in alignment were north and south. I believe the pendulum also swung strongly anticlockwise for awhile, but outside of the circles it just swung a little bit north and south.

SINCE YOU ALL WERE THERE FOR AN HOUR OR SO, COULD YOU FIND ANY EVIDENCE OF ANY TRACKS OR ANY GRASS DISTURBANCE OF ANY KIND AROUND THE TWO CIRCLES?

Not that I know of, no. I certainly didn’t. We talked about it briefly among ourselves and no one else did, as far as we know, either. Some of the grass had just started to spring up again. The green blady grass are quite strong lumps of material and it would have taken an interesting force to actually bend it down and ripple it into the rest of the grasses without damaging it. We saw no sign of holes where people could stick poles in the center or anything like that. 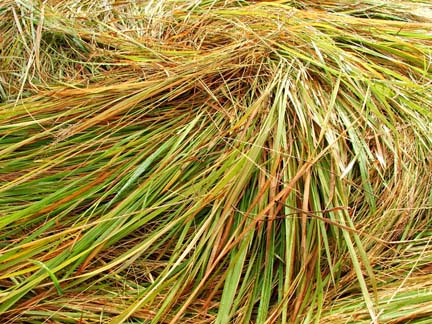 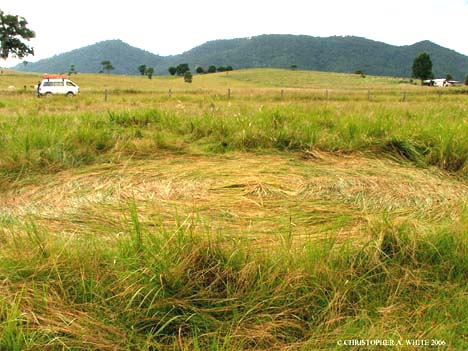 DO YOU KNOW WHAT THE WEATHER CONDITIONS WERE LIKE AROUND MARCH 28?

Yes, it was fairly warm and sunny. We’ve had quite a hot year.

BUT NO THUNDERSTORMS OR WIND?

WOULD THAT BE THE SAME WEATHER CONDITION IN 2004, DO YOU REMEMBER?

From memory, very similar, I think. The morning was a bit cooler back then.

SO FOR PEOPLE WHO SAY, ‘IT’S GOT TO BE WIND’ COMING DOWN AND SPINNING THESE CIRCLES, WHAT DO YOU SAY?

My own research into crop circles is that really does not occur. Someone did actually – a woman drove by and was kind of intrigued and said it must have to do with whirly winds and things like that. I said, ‘No, it’s definitely not whirly winds.’ The beauty of the central cones of the circles themselves and the way the surrounding grasses are not touched at all, and not being in a vertical crop, the edges were still clean and tidy. We could not find any evidence of broken or trampled grass anywhere.

AND THOSE CENTERS – IN ENGLAND I HAVE SEEN THOSE BEAUTIFUL RAISED CENTERS, SOMETIMES AS FAR AS 12 INCHES OFF THE GROUND. IF I UNDERSTAND FROM YOUR PHOTOGRAPHS AND YOUR DESCRIPTION, THE CENTER OF THESE TWO CIRCLES IN 2006 ARE RAISED IN THE CENTER FROM THE GROUND?

Oh, quite significantly. One of the pictures I sent you of Paul Boulton holding a tape measure – it’s a vertical picture. You can see very clearly in there how high that cone actually is and the size of it. His feet are sinking at least 6 inches into the rippled grass.

Not that I know of, Linda. But last time, I had a woman send me an e-mail from the Gold Coast. She’s in her twenties now. She sent me an e-mail that said when she was younger – this was in the 1980s and down on the Gold Coast, it was nowhere the development as it is now. They had large open tracts and fields down there. When she was playing in the fields with a couple of girlfriends, she saw circles like the ones in Conondale quite regularly. She was referencing the 2004 circles. They saw them all the time down there in one particular area.

For more about the grass and crop formations, please see reports below in Earthfiles Archives and my book, Mysterious Lights and Crop Circles in the Earthfiles Shop.