“Clearly when it comes to engineering warp drive or wormhole solutions, seemingly insurmountable obstacles emerge, such as unattainable energy requirements or the need for exotic matter. Thus, if success is to be achieved, it must rest on some yet unforeseen breakthrough about which we can only speculate, such as a technology to cohere otherwise random vacuum fluctuations.”

Reposted September 11, 2019 – Updated August 3, 2018  Earthfiles Archive originally posted July 12, 2017  Albuquerque, New Mexico – Among the dozen scientists and laboratories who have had a piece of the micron-layered Bi/Mg-Zn to study since 1996, electrical engineer and physicist Harold E. Puthoff, Ph.D., has worked with the strange material twice. Now 81, back in in 1985, Hal Puthoff founded the for-profit company, EarthTech International, Inc. in Austin, Texas. As President and Chief Executive Officer, Dr. Puthoff’s primary goal for EarthTech has been to investigate zero-point energy and to evaluate so called “over-unity” devices said to release more energy than they consume from conventional power sources. The hypothesis is that the additional energy is coming from the ambient Zero Point electromagnetic field, low-energy nuclear reactions or some other source. Dr. Puthoff also founded in 1985 and still directs the Institute for Advanced Studies – Austin (IASA), Texas. IASA researches energy generation and space propulsion with funding from anonymous donors, including agencies such as the CIA, NSA and DIA.

Hal Puthoff earned his Ph.D. in electrical engineering from Stanford University in Palo Alto, California, in 1967. He then invented tunable lasers and electron beam devices for which he holds patents. In 1969, he co-authored with Richard H. Pantell, Ph.D., Stanford University Prof. of Electrical Engineering (Emeritus), the book Fundamentals of Quantum Electronics, published in English, French, Russian and Chinese. Dr. Puthoff has published dozens of important science papers about his investigations of the vacuum and zero point energy. One of his most-referenced papers is Inertia As A Zero-Point Field Lorentz Force, published in a 1994 Physical Revue A journal (Wee Websites below) that covers atomic, molecular, optical physics and quantum information. This paper was nominated to the Nobel Committee for Nobel Prize in Physics, but was not finally selected.

“Clearly when it comes to engineering warp drive or wormhole solutions, seemingly insurmountable obstacles emerge, such as unattainable energy requirements or the need for exotic matter. Thus, if success is to be achieved, it must rest on some yet unforeseen breakthrough about which we can only speculate, such as a technology to cohere otherwise random vacuum fluctuations. … E.T. knowledge of the physical universe may comprise new principles which allow some form of faster-than-light travel. This possibility is to be taken seriously, since the average age of suitable stars within the ‘galactic habitable zone,’ in which the Earth also resides, is found to be about 10^9th years older than the sun, suggesting the possibility of civilizations extremely advanced beyond our own.”

Dr. Puthoff was aware of my effortsin 1996 to 1998 to investigate the layered Bi/Mg-Zn metal allegedly pulled off the bottom of a wedge-shaped UFO west of Sierra Blanca mountain in New Mexico back in 1947. By January 7, 1999, we had exchanged a letter of agreement about specific testing goals he could try on a piece of the layered Bi/Mg-Zn at his Institute for Advanced Studies in Austin, Texas. That day I sent him a small sample with a summary of our agreed test goals:

1) Would it turn into a “lifting body” (anti-gravity) inside a strong electrostatic field augmented by a 7 Ha signal?

3) Will the layered Bi/Mg-Zn respond to various dynamic magnetic fields?

4) Does the layered metal have super-conducting properties?

5) Can any laboratory reproduce precisely the 1 to 4 microns of pure bismuth in alternating layers with 100 to 200 microns of 97.6% magnesium in alloy with 2.4% zinc?

Dr. Puthoff returned the small Bi/Mg-Zn sample to me after a couple of months in 1999 without any definitive results to the above questions.

Then thirteen years later in April 2012, Hal Puthoff and I talked again about his trying more tests of a bigger piece of Bi/Mg-Zn in his newly expanded laboratory facilities. 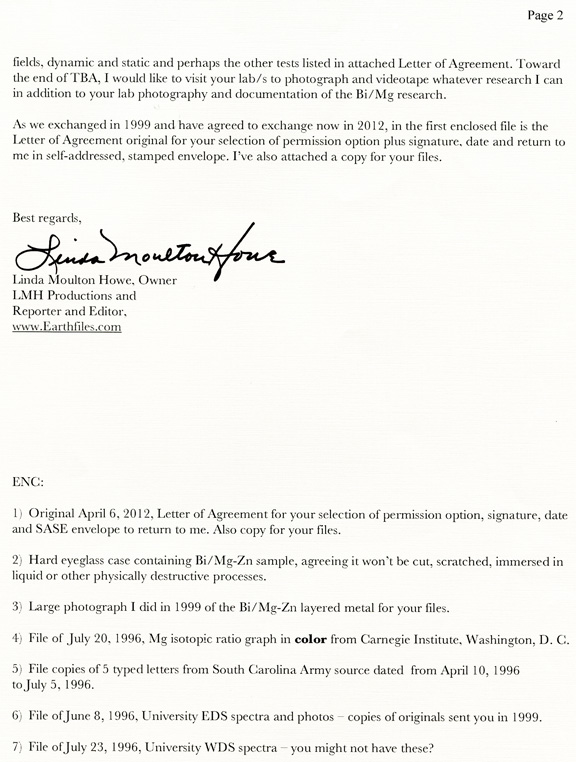 Six months later on September 24, 2012, Hal Puthoff wrote me the following summary letter after his second round of tests with the Bi/Mg-Zn layered metal. He did not find any “lifting body” interactions of the layered metal in various electromagnetic fields, whether dynamic or static.

What Are Terahertz Frequencies?

Terahertz, abbreviated THz and sometimes called T-rays, is a unit of electromagnetic (EM) wave frequency equal to one trillion hertz (1012 Hz). Terahertz electromagnetic wave frequencies are higher than microwaves, but lower than infrared radiation and visible light. Unlike x-rays, T-rays are non-ionizing. Ionizing radiation — such as X-rays and gamma rays from radioactive materials — carries enough energy to break bonds between molecules and ionize atoms, which damages organic life.

Currently there are few public technologies to generate and manipulate THz. Terahertz frequencies are too high to be measured digitally by electronic counters. That means they must be measured by energy and wavelength. Carter M. Armstrong, Vice President of Engineering in the electron devices division of L-3 Communications in San Carlos, California, cochaired a 2007 U. S. government panel that reviewed compatct terahertz sources. He said in frustration, “The past ten years have seen the most intense work to tame and harness the power of the terahertz regime. What I really want are answers to questions like: What exactly are terahertz frequencies best suited for? And how demanding are they to produce, control, apply, and otherwise manipulate?”

One public technology is the metal detector used in airport screenings by Homeland Security. The reason is that the high THz frequencies can penetrate clothing, paper, cardboard, wood, masonry, plastic, ceramics and other materials to show metal objects. But THz cannot penetrate liquid water or metal. Non-ionizing THz is an alternative to ionizing x-rays in producing images of what’s inside some solid objects.

Dr. Puthoff suggests that high frequency testing of the micron-layered Bi/Mg-ZN layered metal with sub-wavelength THz (terahertz) signals might reveal that the bismuth layers function as a waveguide structure for sub-wavelength THz. If that can be tested and confirmed, it will also mean that the 1947 retrieved layered metal from a UFO/UAP crash in New Mexico was manufactured by an intelligence more advanced than current Earth humans. One anonymous scientist who worked long ago in an underground laboratory with larger pieces of the Bi/Mg-Zn let me know that the key to the layered metal’s function is not in Hertzian waveforms, but in Nikola Tesla’s discovery of Non-Hertzian wave femtosecond transition pulses. A femtosecond is one millionth of a nanosecond or 10^15 of a second and is used in laser technology measurements.

To be continued in Part 7 with another physicist who worked on large piece of Bi/Mg-Zn underground at Area 51, Nevada