“Those triangles in the sky shocked me! And after I sent the pictures to my brother in Manchester, he texted back, ‘That’s really weird!’”

— Imran Choudhry, U. K. resident about two photos he took in Mecca, Saudi Arabia, where sky had strange pattern of pale green triangles

“What we’re looking at is actually very bright lights on the ground being reflected between the camera’s lens elements … the lights in the sky are an inverted mirror image of lights on the ground, and they’re more easily visible against the dark background.”

UPDATE – January 19, 2020  Albuquerque, New Mexico –  I shared with a professional photo and video analyst in San Francisco my Earthfiles report below with the two Mecca, Saudi Arabia, photos that have dot patterns in the shape of triangles in the sky beneath the moon. The analyst asks to remain anonymous.

“These aren’t digital artifacts, but optical ones. These internal reflections, like sun flares, take place within the lens. So they can affect film photos as well as digital ones.

Imagine you’re looking at a bunch of bright lights at night through, say, 6 sheets of glass separated by a few inches. What you’ll see is a lot of extra lights, reflected helter-skelter and bouncing around off all those glass surfaces. If some of those glass sheets are curved, you will see various kinds of distortions, multiplied by all the additional reflections. In a nutshell, that’s the sort of thing that goes on inside camera lenses, which actually consist of multiple lenses, not just one. These lenses have anti-reflection coatings on them, but that works only so well to kill reflections from bright points of light.

Anyway, I think the issue here is not so much a question of artifacts vs. genuine anomalies as it is of separating observations from conclusions. I think we all acknowledge this distinction as a common foundation of good science and good journalism. So, we all need to be careful not to confuse the two, especially when attempting to analyze “interesting” photos, videos, sound recordings, etc. That means don’t include “Aerial Triangles” in a headline unless we’ve already concluded that that’s what they are in fact. But until that fact has been established, I think we need to be religious about sticking with our raw observations. So a better title is: “What Are the White Dots in These Photos?” If we’re not careful with this, it can be a major turnoff to others who might be potential allies in helping us carefully separate the rare wheat from the damn-near-freakin’-ubiquitous chaff. It will also be a major turn-ON to those who seek comfort in their beliefs and end up with a skewed picture of what’s really going on.

OK. Now the analysis. There is a camera phenomenon called light leaking or “camera ghost.”  This is especially true on smartphones with backgrounds that are dark and very bright light sources somewhere in frame. The light reflects internally and the reflection is picked up in the sensors view of the world.

What we’re looking at is actually very bright lights on the ground being reflected between the camera’s lens elements. Those reflections can vary enormously depending on a thousand different factors, but in this case the lights in the sky are an inverted mirror image of lights on the ground, and they’re more easily visible against the dark background.

To determine this, I overlaid both city scapes in the frame on the right, flipping one of the photos 180 degrees upside down in the sky so you can see where the dot patterns are in each frame, coinciding with the very bright “blooming” parts of the original cell phone images.

In the actual image on left above, bright lights will “bloom” (expand) because they overload the image sensor. But the internal lens reflections are much dimmer than the main image, so they won’t overload the sensor and won’t bloom. Therefore we’ll see something more closely approaching their actual size and shape.

As you can see now in the side-by-side comparison — on the right the white arrows point at the “blooming” bright places in the original image on the left that cause the optical anomalies of straight lines and triangle pattern of reflection dots in the sky. They are an inverted reflection of the three brightest lights in the lower-left part of the original Mecca image. The horizontal row of lights is actually the “marquee” of lights that appears to be on one of the buildings toward which the people are heading.”

Original Report – January 17, 2020  Rochdale of Greater Manchester, U. K. – This week Earthfiles received two images of strange, unidentified triangular patterns in the night sky over Mecca, Saudi Arabia. The photographer was Imran Choudhry of Rochdale, Greater Manchester, England. The date was August 7, 2019, two days before the Muslim hajj pilgrimage to the Great Mosque would begin. At the time, Choudhry had a new iPhone and was taking many photos as he walked in the city where he had just passed the Clock Tower Hotel.

Muslims believe the Kaaba was originally built by Abraham and Ishmael. Then later the site was re-dedicated by Muhammad and has been reconstructed since. When Muslims pray, wherever they are, they turn toward the Kaaba. During the hajj, nearly 2 billion Muslims each year gather around the large black cube and walk counterclockwise around it seven times. There is also a Black Stone inside the black Kaaba set into the eastern corner of the ancient black cube located at the center of Mecca’s Great Mosque. It is revered by Muslims as an Islamic relic which, according to Muslim tradition, dates back to the time of Adam and Eve. Some think the Black Stone is from outer space, perhaps a meteorite. But the stone has never been analyzed with modern scientific techniques and its origins remain the subject of speculation.

Imran said he was excited to be there and just kept snapping the Photo mode in his new iPhone as he turned from the Clock Tower Hotel to photograph the celebrating crowd.

“I was only looking at the people and taking lots of pictures because I was having such a wonderful time. I took the first photo right after passing the Clock Tower Hotel. A few seconds later, I snapped a second photograph of the crowd and buildings and the moon.”

Imran insists that he never saw the green triangles in the sky when he was snapping his iPhone images. But when he returned to his hotel, he sorted his Mecca photos to send some back to his family in England. That’s when he saw the odd sky patterns for the first time.

“Those triangles in the sky shocked me! And after I sent the pictures to my brother in Manchester, he texted back, “That’s really weird!”

Imran heard about my investigations of the Colorado and Nebraska mystery drones and wanted to get his two Mecca photos to me to see if I had seen anything like it before. I have seen photos and videos of many strange, multi-colored, looping and zigzagging symbols associated with UFO activity in the United States. But I have never seen a series of triangles and lines made up of “dots” like these images before.

Here are three of the 500+  symbols or hieroglyphs projected in the night sky at 10:10 PM Central in Stephenville, Texas, on January 19, 2008, captured in a 12-Minute video by resident David Caron near the Stephenville Clark Field Municipal Airport. Each was 3-dimensional and segmented in colors and intricate structure. 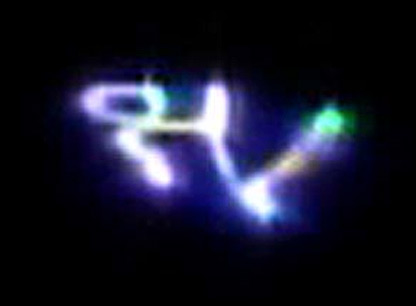 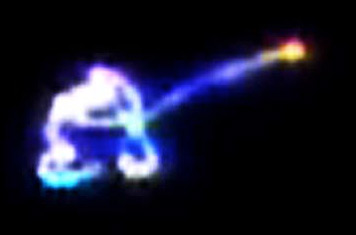