“After reaching sexual maturity, this Turritopsis dohrnii jellyfish can revert to its juvenile stage and mature again — a feat that would be akin to a butterfly turning back into a caterpillar, then metamorphosing again into a butterfly.” 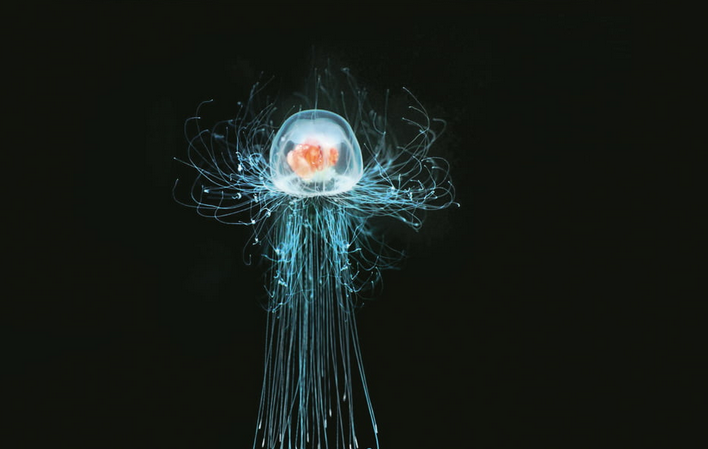 This “immortal jellyfish” that marine biologists know as Turritopsis dohrnii was first discovered in the 1880s in the Mediterranean Sea. Full grown, it’s only about 4.5 mm or 0.18 inches wide. But if it is damaged or starved, it can miraculously  bud and release a “born-again polyp” that is a medusa  genetically identical to the previous adult. The medusa is the bell or umbrella shape that hangs down over the center column structure of marine invertebrates.

October 8, 2022  Rochester, New York – The U. S. Proceedings of the National Academy of Sciences  reported in its August 29, 2022, issue, “While aging affects most living organisms, the hydrozoan Turritopsis dohrniis is the only species able to rejuvenate repeatedly after sexual reproduction, becoming biologically immortal.”  And the genetic code that makes T. dohrniis immortal was cracked and published by researchers in Spain

Maria Pascual-Torner, a scientist at Universidad de Oviedo in Spain, who studies the genetic sequencing of the T. dohrnii jellyfish have investigated what triggers the  jellyfish’s transformation back into its youthful self by shedding limbs and morphing into polyps again that miraculously produce a new medusa bud for a brand new rejuvenated body. The scientists documented what genes the T. Dohrnii use in each phase of their rejuvenation development.  Then they took some jellyfish in each phase of becoming young again, froze them and turned them to mush to extract their mRNA so they would have a record of which genes were actively being used to make proteins.

Do T. Dohrnii Hold A Key for Human Immortality?

Dr. Pascual-Torner says, “Jellyfish are very different from humans. It’s not just about one gene or complex. It’s about the whole mechanism we found that works together. From this knowledge we hope to find better answers to the many diseases associated with aging that overwhelm us today.”

10-25-2020 – Beyond Egypt to Peruvian Plains of Nazca, Cats Mummified for Eternal Life.

12-19-2014 – Human Consciousness Can Recycle In and Out of Matter Containers.