"We were the first to reach the formation at 4 AM (July 7, 2007) after seeing a very bright flash of light. The wheat circles were raised 6 inches above the ground so when we stepped in, the plants crunched under our feet like we were stepping on delicate crystals.”

4 AM digital images added below. 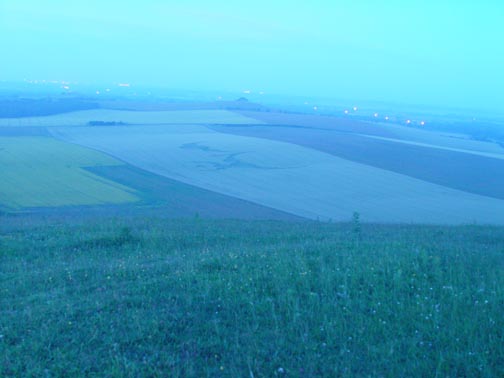 July 19, 2007 / Updated  July 27, 2007  Alton Barnes, Wiltshire  -  Gary King is 41-years-old and currently a Linguistics student at Cardiff University in Wales, U. K. Between 1985 and 1987, he had worked as a paralegal in London and then moved on to form his own private investigator company to trace missing persons and investigate cases of matrimonial discontent. He was doing private-I work until July 1997, when he walked into his first English crop formation "and life has changed considerably ever since," Gary told me in a July 11, 2007, phone interview. He explored Navaho reservations in Arizona, studied the dance traditions of West Africa, increased his knowledge of Tai Chi and other martial arts. He began to realize that he was becoming increasingly sensitive to the seen and unseen.