“We have now seen the smallest details on the largest object in our solar system. What we previously thought looked like a bright point, one structure, is now breaking down into many smaller structures.”

February 1, 2020  Summit of Haleakala, Maui, Hawaii – A brand-new and powerful solar telescope has stunned the world with the best, most detailed images/videos ever taken of our Sun’s surface. Called the Inouye Solar Telescope after Hawaii’s deceased U. S. Senator Daniel Inouye, it is managed by the National Science Foundation near the summit of Haleakala, Maui in Hawaii.

It’s like watching kernels of gold corn undulating as if on liquid, but we know our Sun is mostly hydrogen and helium plasma. Those moving “kernels” are solar granules. They are the tops of convection cells in the solar plasma where hot plasma rises in the middle and then falls back down around the edges as it moves outwards and cools. Each granule is up to 994 miles in diameter (1,600 km), which is wider than the state of Texas. And there are trillions of them on our dear Sun that keeps Earth life warm.

This Inouye Solar Telescope close-up of the Sun shows the moving granules of solar plasma rising and falling on the surface.

The Inouye Solar Telescope Director, Thomas Rimmele, says:  “It’s all about the magnetic field. To unravel the Sun’s biggest mysteries, we have to not only be able to clearly see these tiny structures from 93 million miles (150 million km) away here on Earth, but very precisely to measure their magnetic field strength and direction near the surface and trace the field as it extends out into the million-degree corona, the outer atmosphere of the Sun.” 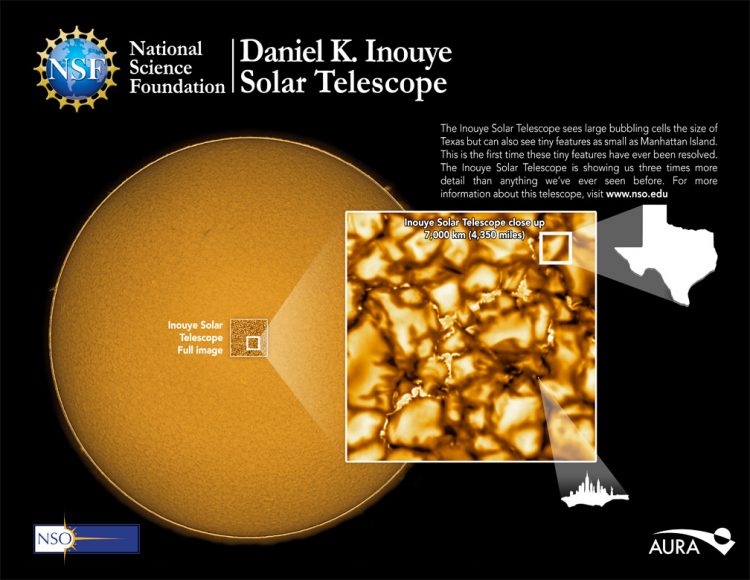