“The ancient Egyptians were not obsessed with death. They were obsessed with life!  So mummification was anticipating life after death with the goal to perpetuate living forever.”

October 25, 2020 Plains of Nazca, Peru – Wonderful cat creatures have been loved and admired for centuries. Egyptians at least 4,000 years ago revered cats and mummified them in careful wrappings like this one at the Smithsonian Institution in Washington, D. C.

Smithsonian Curator Melinda Zeder explained that, “The ancient Egyptians were not obsessed with death. They were obsessed with life!  So mummification was anticipating life after death with the goal to perpetuate living forever.” The Egyptians believed that cats held a unique position in the afterlife so that’s why they were mummified to be offered to the gods to gain eternal life.

On October 15, 2020, Peru’s Minister of Culture announced the discovery of this big cat on the side of a hill, hidden until now amid all the other animal figures and straight lines in the famous Plains of Nasca. This cat with pointy ears, round eyes, and striped tail stretches about 121 feet, or 40 yards, along the hillside. Experts say it dates back to around 200 B. C., so this cat was carved into this Nazca hillside 2,200 years ago.

It is hard to understand how the cat has been hidden from public eyes until now amid all the other animal figures and straight lines in the famous Plains of Nasca visited by thousands of tourists since its first discovery in 1926.  This Nazca cat with pointy ears, round eyes, and striped tail stretches about 121 feet, or 40 yards, along the hillside. Experts say it dates back to around 200 B. C., so this cat was outlined here 2,200 years ago.

Above:  Lima, Peru, is about 278 miles northwest of Nazca.  Below:  Nazca is 50 miles northeast of San Juan de Marcona on the Pacific Ocean . 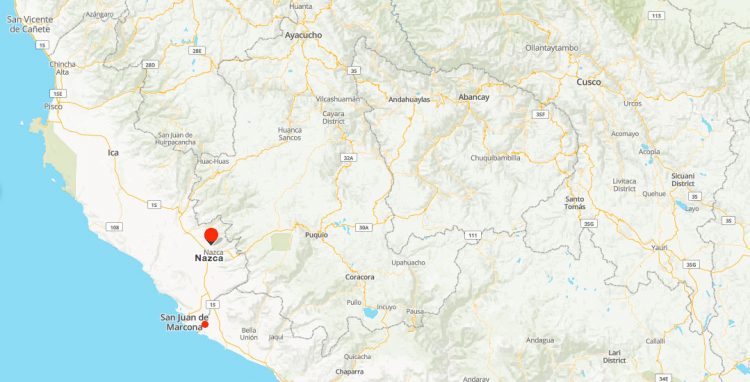 The Peruvian Culture Minister explained that the cat figure was found by employees who were cleaning the hill mound.“The figure was barely visible and was about to disappear due to its location on a fairly steep slope and the effects of natural erosion. The lines outlining the cat vary between 30 and 40 centimeters wide — which is 12 to 16 inches wide.” The outline goes deep enough into the hard surface soil baked by unrelenting sun to expose the yellowish soil beneath.

The straight lines, trapezoids and animal glyphs between Nasca and Palpa, Peru, were first discovered in 1926 by a Peruvian archaeologist. 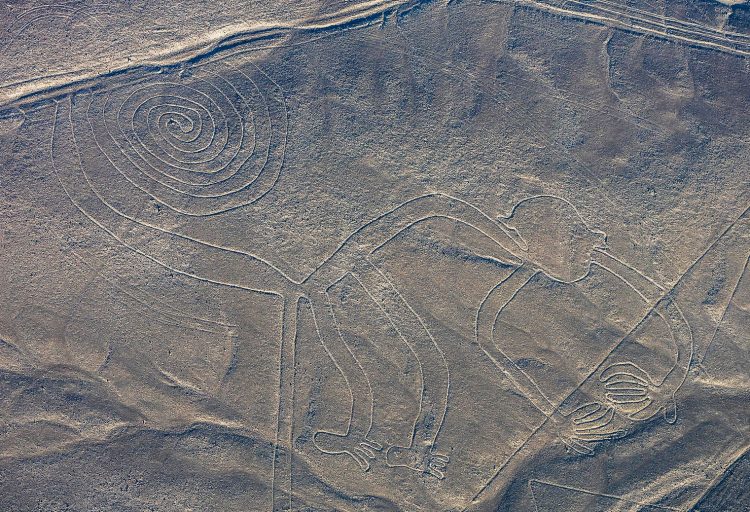 The large, mysterious glyphs carved into the Nazca Plains have remained among Peru’s greatest historic mysteries. Theories about their creation have ranged from ancient farmers trudging the soil with their feet — to extraterrestrial intelligences marking the Nazca Plain and higher up in the Andes Mountains for purposes unknown.

Linda’s Flight Over Plains of Nazca in June 1987

But I saw with my own eyes back in June 1987 when I went to Peru for nearly a month. I flew from Lima 275 miles southeast to the Nazca plain inland from the Pacific Ocean. I hired a Piper Cub pilot to fly me over the glyphs carved into the land and hills. He told me that the patterns did not stop at the Plains of Nazca. He said he had flown straight east rising up the Andes Mountains where he saw lots more glyphs no one knew about. He also offered to show me how deeply into the soil the patterns were pressed.

In his Piper Cub small plane, the pilot flew me along the edge of one of the trapezoid “runways” that was six miles long. The pilot told me he would fly low along one side of the entire length of the trapezoid so I could see how deeply it was pressed into the ground. 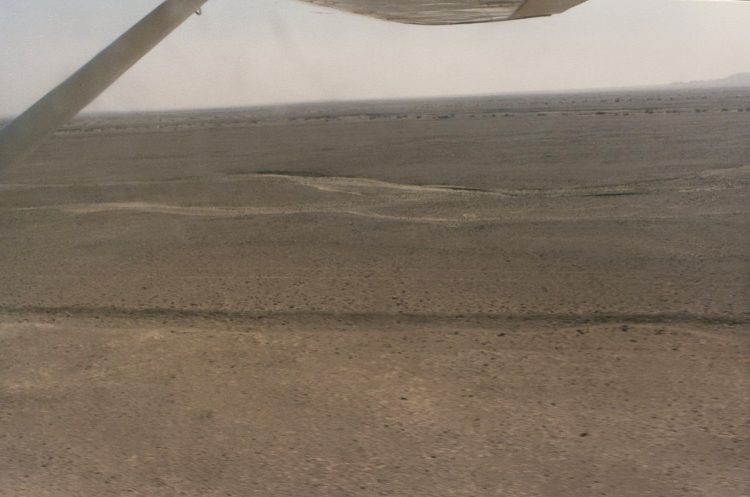 I estimated the depth of the trapezoid pressed down into the Nazca soil was more than a foot the entire 6 miles. The pilot said, “No Peruvian Indians shuffled their feet in the dirt to create this.”