“Many of the Valarde birds have little to no fat, many are underweight, and there’s not a lot of external signs that they have been inhaling a lot of smoke.”

September 18, 2020  Albuquerque, New Mexico – This week, beyond White Sands Missile Range in southern New Mexico and Valarde in northern New Mexico, wildlife agencies in Colorado are now receiving reports of small songbirds dropping from the sky dead in southwestern Colorado. Joe Lewandowski, a spokesperson for Colorado Parks and Wildlife, told reporters yesterday, September 17, 2020, “We’ve never seen anything like this before.”

Some speculations have raised temperature changes from summer to fall. But the fact is that the first reports of large masses of birds falling dead to the ground in White Sands Missile Range in southern New Mexico began on August 20th — a full two weeks before the Arctic air mass plunged south on September 7th.

That sudden summer to winter happened twelve days ago on September 7, 2020. But the first reported bird die-off reported at the White Sands Missile Range in southern New Mexico was on August 20, 2020, two weeks before. Martha Desmond, Ph.D., a professor at NMSU’s Department of Fish, Wildlife and Conservation Ecology, told the Las Cruces Sun: “It is terribly frightening. We’ve never seen anything like this. We’re losing probably hundreds of thousands, if not millions, of migratory birds.” 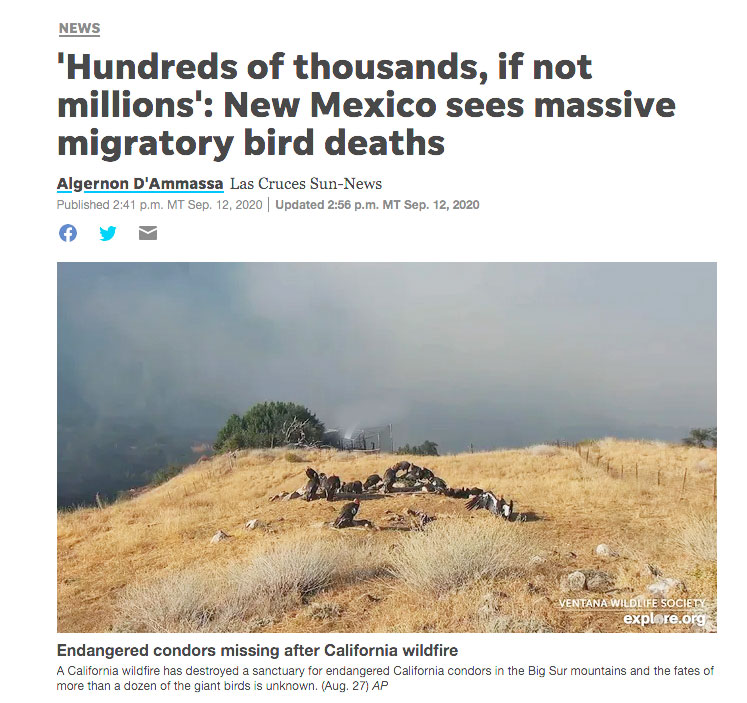 So the sudden drop in temperature on September 8th from the Arctic air mass moving south cannot explain the die-off of so many birds of so many different sizes, both insect eaters and grain eaters, from August 20th onward.

Further it’s been warm, pleasant temperatures this week of September 14 to 18. So, why would song birds in southwestern Colorado suddenly start falling out of the sky dying there? Both Colorado and New Mexico have had their blue skies tinged white from all the West Coast wildfire smoke. Even northern Mexico has reported mysterious deaths there. But birds have not been reported falling out of the sky dead in California, Oregon or Washington. Many samples of the birds have been sent to the Ashland, Oregon, Fish and Wildlife Laboratory, which is equipped to do very detailed necropsies. Others have been shipped to the National Wildlife Health Center in Wisconsin for examination. It could take weeks for the various laboratories to have firm reports based on evidence from the bird necropsies.

Wildlife biologist Trish Cutler, who works at the White Sands Missile Range, told Albuquerque’s KOB-TV Channel 4 news that normally there might be half a dozen dead migratory birds reported in a normal week somewhere on WSMR.  “But this last week (Sept. 12 – 18, 2020), we’ve had a couple of hundred, so that really got our attention.”

On Tuesday, September 15, 2020, I talked with freelance reporter Austin Fisher in Santa Fe, New Mexico. Recently he and some friends went on a tubing trip in the Rio Grande River near Velarde, New Mexico, north of Santa Fe.

They stopped at a picnic area and decided to get out on a sandy beach and explore. That’s when Austin was confused to see so many small, dead birds. He used his cell phone to record a short walk along the bird bodies — 305 of them — and said it looked like a flock had dropped straight down to the ground, dead.

Ornithology Ph.D. students from the University of New Mexico, Jenna McCullough and Nicholas Vinciguerra, volunteered to go to the Rio Grande River site in Valarde to collect the dead birds for forensic examinations. Jenna counted 305, including 258 violet-green swallows. She told TNYT, “Many of the Valarde birds have little to no fat, many are underweight, and there’s not a lot of external signs that they have been inhaling a lot of smoke.”

At the Cornell Lab of Ornithology in New York, senior research associate Andrew Farnsworth, Ph.D.,  stressed to The New York Times on September 18th that the mystery die-offs began before the sharp drop in temperatures. “It’s different this year than other years. We’ve had plenty of hot summers, but very few that have had these huge-scale fires combined with heat combined with drought.” But so far there are no firm answers to why so many different sizes and types of birds would die in such huge numbers between August 20th and the third week of September 2020.

“Why are dead birds falling from the sky?” April 14, 2020, by Fendaux:  https://fendaux.com/why-are-dead-birds-falling-from-the-sky/

Linda Moulton Howe
Reporter and Editor, Earthfiles.com
EARTHFILES
This site uses cookies to store information on your computer. Some are essential to make our site work; others help us improve the user experience. By using the site, you consent to the placement of these cookies.OKRead more