- Bruce Jakowsky, Ph.D., Geologist and Planetary Scientist, University of Colorado, Boulder December 2, 1999  Houston, Texas - On Friday, December 3rd, NASA's Polar Lander will set down on the South Polar Cap of Mars. Two probes designed to punch into the soil will be released. If all goes well, soil samples will be warmed up and analyzed for water. If there's ice, there might be liquid water underground. And if there's water, then life could still possibly exist on Mars - even if only bacteria and other microbes below the surface.

"There are an estimated 10 billion large gaseous planets in our Milky Way galaxy alone and at least one trillion galaxies in this universe. Even if only one out of a trillion of those galaxies had life, you'd still be talking about 10 billion places where life exists." - Steve Vogt, Ph.D., Astronomer, Univ. of California at Santa Cruz -

Forgot Password
© 1999 by Linda Moulton Howe November 21, 1999  Marion New York - The latest formation on record, at least in soybeans, formed around October 21st when it was discovered in Marion, New York about 30 miles east of Rochester near Lake Ontario. The farmer was havesting at night with spotlights and was shocked to discover the curves, circles and corridors of this new pictogram in exactly the same place he found another formation in mid-August 1997. This new one was lined up north to south with a 24-foot-diameter ring at the top connected by a long corridor to a large comma-shape. Fifty feet straight east of the comma was a small 6 foot circle, known as a "grape shot." The entire formation was apparently crowned by a thin arc which the farmer had nearly obliterated in his night time harvesting before he realized the pictogram was there. All the circle, ring and arc plants were laid down counter-clockwise, except for one small circle at the end of the comma which was clockwise. 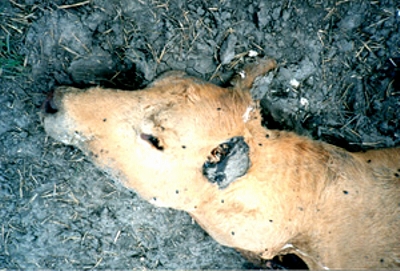 November 19, 1999, Spedden, Alberta, Canada - Fernand Belzil, known to his friends as Fern, is 69 years old and has been raising purebred cattle on a ranch near St. Paul, Alberta for the last forty years. He became interested in the mutilation mystery in 1994 and has personally investigated about forty unusual cattle deaths. The most recent was a 1700 pound herd bull found in Spedden, a few miles west of St. Paul, on October 29th.

Forgot Password
November 18, 1999 ­ Orca Whales Contaminated by Ocean Chemical Pollution ­ Orca "killer whales" throughout the world are now contaminated by a poison that the United States and Canada banned twenty years ago, but other countries such as Russia still use. That poison is PCBs, poly chlorinated biphenyls, once used everywhere for cooling and insulating electrical transformers and coloring newspaper comics. PCBs were even sprayed on country roads to keep dust down. Dr. Rob Macdonald, an oceanographer for the Canadian Institute of Ocean Sciences in Sidney, British Columbia, says "the PCB paintbrush has covered the globe." Marine scientists are concerned that the oceans are so polluted with the dangerous chemicals.


"I think it's very unlikely that it was an engineered virus. It looks much more like there are sequences very similar in another part of the world, but that doesn't tell us anything about how it might have been introduced. And that is obviously cause for some concern." - W. Ian Lipkin, M.D., Univ. of California at Irvine -

November 15, 1999  University of California-Irvine ­ By the time the first frost touched Philadelphia this fall, dead crows and other birds in a couple of suburbs had been sent to laboratories to see if the Kunjin West Nile Fever Virus had spread from New Jersey, New York and Connecticut. The Pennsylvania test results are due soon and public health officials are concerned about the implications for next spring and summer. For the first time in history, this virus strain normally found only in Africa, Australia, the Middle East and Eurasia showed up in the United States. Fifty-six people in New York City were infected with the foreign virus and seven died, along with dozens of crows that are especially sensitive to the West Nile Virus. Transmission of the disease is through ticks, mites or mosquitoes that bite birds. Bird blood fills up with the virus rapidly over several days. During that time, insects can bite infected birds and then bite a human who can also become ill.

Forgot Password
November 13, 1999  Las Vegas, Nevada ­ This past week I talked with Colm Kelleher, Ph.D. Biochemistry and Deputy Administrator at the National Institute for Discovery Science (NIDS) in Las Vegas, Nevada. NIDS paid for a necropsy on the deformed calf fetus born October 22, 1999 at a ranch owned by Joe Martinez in Los Brazos, New Mexico. (See: Earthfiles November 7, 1999 report.) Dr. Kelleher told me that after my radio and Earthfiles.com reports, he requested that the one eyeball from the deformed fetus that had been stored at minus 85 degrees F. be thawed for further examination. I asked Dr. Kelleher if any specific study of the eyeball had been made before by veterinarian Leroy Martinez or NIDS scientists prior to freezing. He said none had been, so now the eye would be studied further. After thawing and further examination, NIDS provided a photograph of the deformed fetus's comma-shaped cornea and elongated pupil shown below.

Forgot Password
Update Note: More information about fetus eye examination will be added to this report on or about November 13, 1999. Also, please see web site listing below. November 7, 1999 Environmental Updates - Primitive Fish A Half A Billion Years Ago One of the challenges of science is to figure out the beginning of things, from the dawn of the cosmos to how long ago vertebrate animals with bones first appeared on earth. In this past week's journal Nature, two Chinese teams reported the discovery of fish-like fossils with primitive backbones that are about 530 million years old. That puts them in the middle of the Cambrian epoch when all kinds of animal life proliferated on this planet. For Cambridge, England scientist, Simon Morris, the fact there were primitive fish nearly half a billion years ago means that "the so-called Cambrian explosion was more abrupt and dramatic than we thought."

Forgot Password
November 6, 1999  Chula Vista, California ­ The International Meteor Organization (IMO) has announced a call for meteor observations between midnight and dawn local times on November 10, 11 and 12. This is not for the famous Leonids. A newly discovered comet this year called Comet LINEAR made its closest approach to the Sun in September. Earth will be passing through whatever dusty debris the comet left in our planet's orbital path on November 11th. This new meteor shower will be called Linearids, not to be confused with Leonids that will arrive a week later on November 18th. Those dates are around New Moon, so dark skies beyond city lights will help meteor watches. But since no one has seen this comet before, scientists don't know whether it will leave a strong meteor wake or not.