“We’re dealing with some sort of unknown phenomena.”

September 5, 2021  Clarksville, Tennessee  –  Clarksville, Tennessee, residents throughout most of Montgomery County from Sango to Old Russellville Pike to Woodlawn Drive called the 911 emergency call center to report that a loud boom shook the ground and their houses at 9:50 PM Central on Saturday night, September 4, 2021. Some reported seeing a flash of light at the same time. 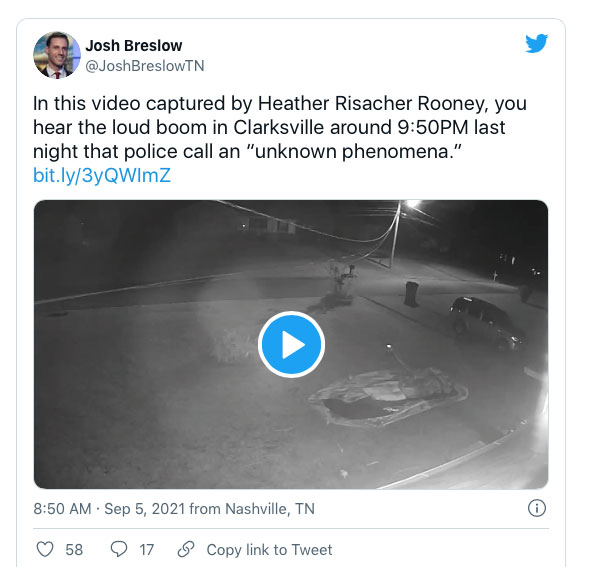 The United States Geological Survey did not register an earthquake in the area. Fort Campbell, 14 miles to the northwest, was on a 4-day Labor Day holiday and all was quiet there.

The Clarksville Police Department told reporters that the police plus local Fire Department, Montgomery County Sheriff’s Office and Emergency Medical Services spent two hours trying to find evidence of an explosive source. But officials had no answer and the CPD stated in its press release:  “Currently, this seems to be some sort of unknown phenomena until someone reports actual damage.”

If anyone has more information about the mysterious Clarksville, Tennessee, boom Saturday night, September 4, 2021, that was strong enough to shake houses but did not affect seismometers, please contact Reporter and Editor Linda Moulton Howe at [email protected]. All requests for anonymity are honored.